Thornton has essentially held the Sharks hostage since early June when he refused any prospect of being traded. He hasn't budged from that position despite rumours that the Leafs showed interest and the Stars discussed in acquiring him. Thornton won't have to budge; his no-movement clause enables him to hole up in the SAP Center until the deal expires in 2017.. 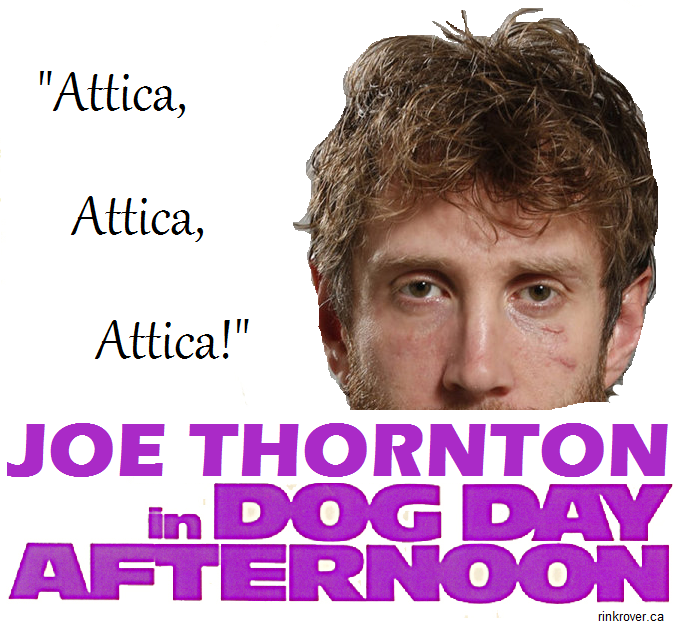 Stripping the "C" might be a prelude to hiring a hostage negotiator to join the SJ's front office.

So what can the Sharks do with a problem like Thornton? If they're determined to rid themselves of "Jumbo Joe," they might consider implementing one of these surefire strategies to evict him from their roster. (If you need me, I'll be sitting by my mailbox waiting for a huge cheque from Hasso Plattner to arrive.)

1. Give him what he wants

According to an earlier report from The Mercury News, Joe's agent/brother John Thornton claims that his client will not waive his NMC unless "he felt fans didn't want him in San Jose.

Earlier, my blog claimed that this was a gif of John Thorton, rocking out with some ice cream next to his unamused father. In fact, the gif shows Joe's other brother, Al. I would like to sincerely apologize to Joe, John, Al, and the good people who make McFlurry's so that this gif could happen. (Correction thanks to @DLeddy)

So the ball's squarely in the court of SJ fans. If there were only some way to unite them against Joe Thornton. How about hosting a "Free Joe Thornton Concert"?

Experience has taught me that people attending festive events will likely sign anything you put in front of them. For instance, when I was an undergrad, there was a campus event once where various student groups pooled their resources to have a midterm bash in the University Centre. Groups were allowed to set up booths to promote themselves while encouraging students to enjoy giveaways and complementary music.

One unofficial group showed up with a petition to end women's suffrage--and people were signing it! Apparently, some feel that signing whatever's put in their faces is the least they can due while they're enjoying free stuff. If a jerk with a clipboard can dupe supposedly intelligent people into signing away half the population's right to vote, surely thousands of drunk residents in the Bay Area can be tricked into putting their signatures toward ousting Thornton.

The Sharks could stage a free concert outside of SAP Center;the festivities will begin with a solemn announcement of the franchise's decision to retire Joe's number. Then, they can bust out a going-away party headlined by Drake, who is the most popular contract tampering rapper around today.

So, Joe will get proof that fans want him to leave; he gets his number retired; and he gets the biggest and therefore best going-away party in hockey history. This option is by far the best because it makes the Sharks organization look good.

Of course, the Sharks might not care about looking good. In fact, after Joe refused to go when they made it clear that they wanted to rebuild the team, ownership might want to be huge jerks to him.

In that case, the Sharks could easily rid themselves of Thornton by making his life a living hell. They can do little things like charge rent for his locker-room stall and seat on the bench, bill him for hot water used during showers, and name gross things after him (e.g. Raffi, did you clog the Thornton again?").

Management could nitpick Thornton's sanity apart by finding fault with everything he does. "Put that smelling salt down," Todd McLellan might say. "Smelling salt is for champions, and you are not a champion Mr. Two-Time Former Captain."

They can also get on Joe's case for thinking too visibly, hearing too loudly, and breathing too much air in the room.

If teammates start to feel bad for Joe, it'll be easy to turn them against him by using classic drill sergeant strategies. For example, McLellan might call everyone back onto the ice after practice to perform an unplanned bag skate because Thornton didn't say "thank you" when fined for looking in the mirror that morning.

I'd be surprised if Thornton could go a month playing on these conditions before he asked for a trade or went insane. The latter outcome leads me to the last suggestion.

3. Have Thornton put on the LTIR forever

Joe Thornton haunts the SAP Center, making young players feel oppressed by his unwanted presence. His icy stare causes some teammates to experience cold spots in the dressing room, and members of management feel threatening vibes in the room. To the owners, he's a relic of a time that has long gone, and yet Thornton refuses to accept his passing and move on to embrace his afterlife as a former Shark.

In other words, Thornton fits the profile of a poltergeist perfectly. And so, the Sharks should seize the commonalities between him and unwanted spirits and have him put him on the LTIR as a ghost. Failing that, they should try to break his contract via exorcism. Instead of having a conventional behind-the-scenes documentary about the team the Sharks could hire ghost hunters to follow them and document the "Thornton Haunting."

They can also make him feel like he's outlived his time in SJ by putting this up as his roster pic on nhl.com.


What do you think the Sharks should do with Thornton moving forward?
Posted by Unknown at 09:59