Forbesing Ahead:Why Everyone Wants the Leafs to Win (even you)

Ken Campbell of The Hockey News took an interesting stab at a longstanding conspiracy theory this week when he suggested that the Toronto Maple Leafs  would not be significantly more valuable if they were more competitive.

The Leafs are currently the only NHL team on Forbes' list of 50 most valuable sports franchises, listed at #26. According to Campbell, their ranking would not change significantly if the team played in the postseason more often.

His comments are one take on the debate regarding the chronic mediocrity that the team has experienced (more than less) since its last Stanley Cup Championship in 1967. Some detractors and despairing fans allege that the team does not ice a competent (let alone competitive) team most years because there is simply no financial incentive for doing so.

Campbell doubts that MLSE is simply orchestrating the world's cruelest heist by icing a substandard Leafs team each year while making ever-greater profits off of delusional fans.

However, he notes that, in terms of per-game profits, the increased number of playoff games would not significantly increase the club's monetary value on the whole.

While MLSE may not see the value of its flagship franchise soar due to a streak of playoff appearances, I argue that the one-time windfall of a Stanley Cup Championship would be massive. That one-time economic boom is probably much more alluring to the club's owners than eking out steady profits through diligent mediocrity.

Indeed, everyone should want the Leafs to win the Cup, but most people don't know that yet. Here's an overview on the aftereffects of a Leafs championship.

You know that old conundrum involving everyone in China jumping off chairs simultaneously in order to set off a cataclysmic event? Replace "China" with "Leafs nation" and "standing on chairs" with "buying NHL jerseys," and you get an idea of the sort of economic groundswell we can expect when (if?) the Leafs win the cup.

Every fan and countless bandwagon jumpers will, at the very least, buy themselves jerseys with the Stanley Cup patch on it. "We may never see them win again," we'll rationalize. "I deserve something after all these years of disappointment," we'll insist. "My other Leafs attire brought the team nothing but bad luck for decades," we'll speculate in order to justify the needless acquisition.

The diehard fans will buy multiple jerseys, hats, coats, track pants, lawn gnomes, et cetera that commemorate the event. Some will buy a replica home and away jerseys with every player from the championship squad just to feel that they have owned the moment sufficiently.

On top of new memorabilia sales, MLSE will be able to empty its warehouse of unwanted inventory simply by "updating" it with a Stanley Cup emblem. For example, I'm willing to bet that the team overestimated the market's enthusiasm for Leafs-themed hammers. 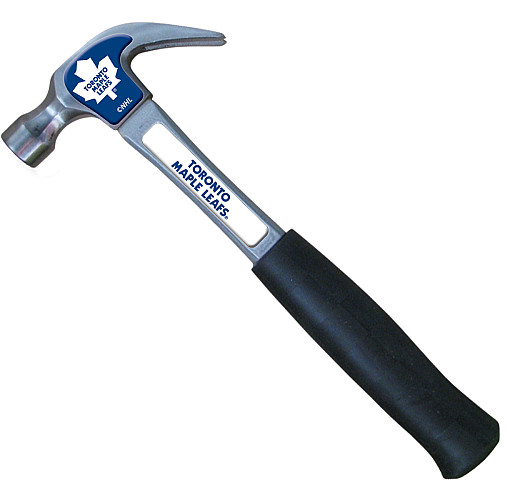 Seriously, this is a real item that you can buy now through the NHL's online store.

Well, all the marketing team has to do to unload these niche items is slap a Stanley Cup sticker on them, jack up the price, and sit back as hordes of crazed fans invade the Real Sports store by the ACC. The ensuing chaos would resemble scenes from Zack Snyder's Dawn of the Dead remake, except that the hordes of zombies will be trying to get into the mall so that stores can devour their bank accounts.

Toronto businesses will similarly profit from the "Merch Madness" that will descend on Toronto following a Stanley Cup victory. Everyone from bobble-head peddlers, to commemorative-program vendors, and even calendar salesmen will see a spike in revenues. MLSE, of course, would have a hand in everything--especially the celebratory bash, which will rival all other parties in human history (real or fictional).

I'm talking about a party bigger than the intergalactic festivities held to celebrate the destruction of the second Death Star. I'm talking about a Leafs Nation-wide dance party featuring Ewoks backing up the percussion section just like in Return of the Jedi--except, unlike in ROTJ, they will be drumming on the helmets of losing clubs instead of low-ranking imperial troops. 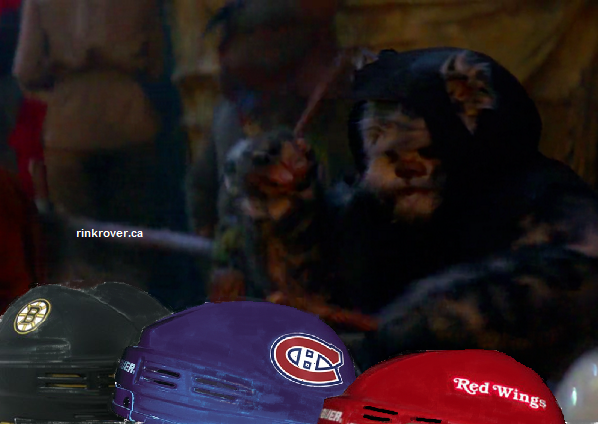 Sidenote: I'm pretty sure that using the enemies regalia as a drumset is a war crime. Way to tarnish an intergalactic regime change, Ewoks.

The other NHL teams will despise the fanfare, but they won't quibble with the results when the extra cash flow enriches their markets. Cap constrained teams will gladly "raise the roof" along with Leafs Nation as the Blue-and-White's revenues raise the cap ceiling. Meanwhile, cash-strapped teams will benefit from the league having more profits to share thanks to Toronto's windfall.

Beyond the league itself, a Leafs championship may fix much of what's wrong with the Canadian economy. There must be a few legendary caches of Canadian currency stored in Leafs piggy banks, which no one has tapped for decades because they are bound to an oath to save the money until the Leafs win a championship. At such time, this Fort Knox of loose change hoards will be broken open, flooding the Canadian economy with unknown amounts of pocket affluence.

A strong Canadian dollar would make the northernmost NHL markets more desirable destinations for players. Some day we may read that a prized UFA turned down offers from the New York Rangers and Los Angeles Kings because he wanted to cash in on a deal with the Winnipeg Jets.

Basically, the Leafs winning the cup would be like the ghosts of John Lennon and George Harrison coming back from the grave to cut an all-new Beatles album. That album would single-handedly save the music industry for generations. A Leafs championship would be a similarly monumental coup for the NHL as a whole and for the Canadian economy.

So let's put away any ideas that MLSE has built the Leafs to suck perennially. The team has come by its mediocrity honestly, but those years of disappointment will make up for the years of pitiful (yet profitable) performances in every, highly-lucrative way.
Posted by Unknown at 12:25