Gretzky's Sister, or, A Rink of One's Own

Cancel luge, and then we can talk seriously about the future of women's hockey at the Winter Olympics.

Preamble: add female athletes to the list of endangered species

If the IOC wants to cut events that are not competitive, women's hockey should not be its top priority.

Yes, gold medals in women's hockey have been monopolized by Canada and the USA ever since the event debuted in Nagano (1998), but that streak of dominance seems brief when compared to other events. While the North American rivals will likely meet again during the gold-medal game in Sochi, there are already signs that such dominance will not last forever.

This temporary dominance doesn't mean that the IOC should discontinue a sport that is gaining momentum despite minor disadvantages such as meager media coverage and awful start times whenever the competitions take place outside of North America. Oh, and don't forget the centuries-old stereotypes that encourage sports enthusiasts to scoff at female athletes.

In response, the CWHL's Calgary Inferno and Toronto Furies have chosen nicknames that dare onlookers to mock women's hockey.

So if the IOC wants to cut lopsided events, where should it start?

1. Take luge off the tracks

Since the introduction of luge events to the winter Olympics in 1964, Italy and East/West/Reunified Germany have monopolized gold medals in the the men's singles competition. The only exception occurred in 1968 when Austria won gold in Grenoble.

In the women's singles, Italy and the Germanys have dominated the golden podium in every Olympiad except for 1980 (USSR) and 1992 (Austria, again). Moreover, the Germans have won gold AND silver in every women's luge since 1998 (when women's hockey was introduced) except for the Vancouver games: Austria won silver in 2010, so Germany had to settle for gold and bronze. Furthermore, in the 2002 and 2006 Olympics, Germans won all three medals in women's singles. And yet, even after back-to-back medal sweeps, the IOC is singling out women's hockey for extermination.

In doubles luge, every gold medal from 1964-present has been won by Italy or the Germanys except on three occasions in which the top honours went to...wait for it...Austria.

So have other countries upped their game for Sochi? Well, here's a little pic that google had to offer when I googled "olympic luge" yesterday: 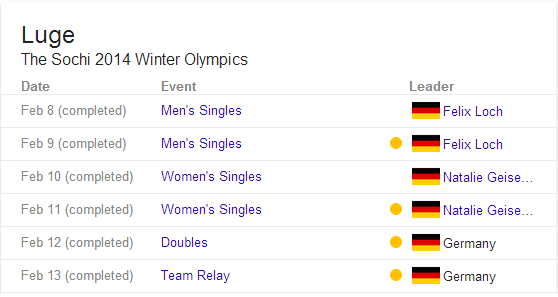 All right, so luge should definitely be guillotined ahead of women's hockey. Now, how about men's basketball?

When men's basketball premiered in the 1936 Olympics, the Americans began a gold-medal streak that lasted 7 straight Olympiads. I haven't found any articles to support this notion, but I don't think that anyone was clamouring for this sport to be removed from the Summer games. Those who did would probably have found themselves blacklisted as Bolsheviks by Joseph McCarthy.

After an upset at the 1988 games in Seoul, the Americans rebounded and won gold at every summer Olympiad from 1992-2012 except for 2004, when they had to settle for bronze. As you would imagine, people found it refreshing to see Argentina take the USA's place in the golden spotlight in Athens.

Just kidding--the failure to clinch gold was received like an anti-Miracle on Ice (the "hell on hardwood" perhaps?). The squad chosen for the 2008 Olympics was dubbed the "Redeem Team" in recognition of their duty to, as one reporter wrote, to "right the wrongs of Athens". That writer does acknowledge that Team USA' tribulations in 2004 stemmed in part from a rise in the quality of international competition, but then he reverts to the notion that nature intended Americans to dominate basketball by referring to the USA's loss at the Athenian Olympiad as "their Greek embarrassment."

Had it not been for the team's hubris, the American men's basketball team would have an uninterrupted gold-medal streak spanning the 1992-2012 Olympics and beyond--just as God intended.

Meanwhile, American and Canadian dominance in women's hockey is supposedly offensive to the very principles of the Olympic games as a celebration of competition.

Lastly, how about men's hockey? Back in the good ole days (i.e. the Cold War), the USSR held a stranglehold on hockey that was only interrupted twice between 1964-1992. The first time occurred when an upstart American team defeated the Soviets at the 1980 games in Lake Placid. However, that upset shouldn't really count because it was devised by divine intervention.

The second and final interruption occurred when the USSR collapsed following their last gold medal in 1988. However, the Soviet zombie known as the Unified Team nevertheless won gold at the 1992 Olympics in Albertville. So, over a period of 10 Olympic games (1956-1992), the USSR/Unified Team won gold eight times while the USA clinched gold twice.

Why, then,  are we complaining that the USA and Canadians have been dominating women's hockey for the past four SnOwlympiads? Perhaps the North American rivals need a compelling narrative, such as the persistent threat of thermonuclear war, in order to better demonstrate the true spirit of the Olympics.

So why is dominance in women's hockey a problem? Ken Campbell of The Hockey News addressed this question in 2010 when former IOC President Jacques Rogge threatened to cut women's hockey. Campbell suggests that, while other countries are improving, the Canadians and Americans are so far ahead of the competition, that the rest of the world might not ever catch up to the North American women's game.

Yep, by the time the other teams learn to fore and aft-check effectively, North American women will be playing on hover-skates and firing pucks hand-cannons like Samus from Metroid.

Pictured: An artists's rendering of Marie-Philip Poulin taking part in a pre-game warm up during the 2018 Winter Olympics.

Seriously though, there are limits to player development. The Canadians and Americans can't reinvent women's hockey every four years, so other teams just need to learn from the dominant teams and be patient. If Canada's recent struggles at the World Juniors have taught us anything, it's that other countries can and probably will catch up to the North American athletes if we encourage women's hockey to grow...preferably without threats to drop the event for dubious reasons.
Posted by Unknown at 15:26