Leafs Learnedly Lash Out Against the SO

The Toronto Maple Leafs may literally be the classiest protesters ever. Seriously, they seem to be voicing dissent over the dubious fairness of the shootout in Latin. More specifically, they are deriding the second stage of overtime through a selection from a collection of medieval poems that date back to the 13th century.

In last night's game against the New Jersey Devils, the Leafs DJ kicked it exceedingly old school right before the shootout commenced by blaring the first movement ("O Fortuna") of Carl Orff's setting for poems taken from the Carmina Burana. Don't let the name throw you off; you totally know this song. It's basically the musical equivalent of the "that guy" actor.

If you don't believe, just listen to this clip. You'll go "oh, yeah!!!" in less than 60 seconds, guaranteed.


This song is basically a lament that the aspirations and very lives of humans are frequently and unfairly ruined by the capriciousness of fortune. The trope of fortune's fickleness is particularly appropriate for a skills competition that ends an evenly-matched contest in an arbitrary (and often unsatisfying) manner.

Yes, I loathe the shootout, and so do the Leafs (apparently).

Here's a translation of "O Fortuna" courtesy of UC Davis:


O Fortune/Luck,
Like the moon,
You are changeable,
Ever waxing
And waning.
Hateful life,
First oppresses,
And then soothes
As fancy takes it;
Poverty
and power,
It melts them like ice.

Fate--monstrous
And empty,
You whirling wheel,
You are malevolent;
Well-being is in vain
And always leads to nothing,
Shadowed
And veiled,
You plague me too.
Now through the game
bring my bare back
To your villainy.

So the shootout, as a game predicated on chance and luck, is as constant as the waxing and waning moon. Fortune, like a wheel (hence "wheel of fortune") can force the powerful and impoverished to exchange positions in life for no apparent (let alone just) reason. Hence hope in the outcome of the shootout is vain because the competition is overseen by the unpredictable and malevolent forces of chance. 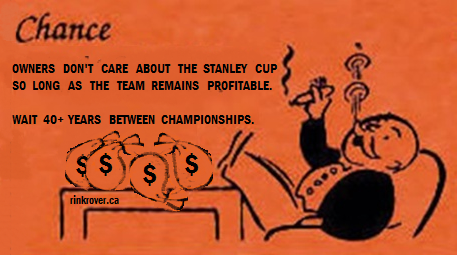 Of course, Leafs nation already thoroughly understands just how much Chance can suck.

The selection from Carmina Burana gets particularly interesting when used in a hockey context because of the lines that I have transcribed above in italics. Fortune, it seems, is a rat: in the game of life, Fortune performs villainy on the bare backs of people. To put this concept in hockey terms, Fortune is the kind of cheap-shot artist that hits players from behind.

When a fan base thinks that its favourite club will surely make the playoffs, Fortune blindsides the team, hitting them square in the numbers and knocking them out of their long-held playoff position. After being boarded by the impish impulse of chance, dazed teams watch in befuddlement as mediocre clubs step over them as they sink in the standings like a bundle of stones.

Shootouts are a particularly cruel agent of fortune as they can keep a team afloat in the playoff race only to bar them eventually from the post-season if a team has too many SO and not enough ROW (Regulation plus Overtime Wins) points. Ultimately, the cruel gimmick that gave a team false hope can also render them ineligible for Stanley-Cup competition.

Thus "O Fortuna" doesn't just capture struggles in the shootout, but the capriciousness of the NHL standings itself!

So what can the NHL do to penalize Fortune for flagrantly interfering in NHL games? Since it has a reputation for hitting-from-behind that spans more than half a millennium, the issue should be taken up by Brendan Shanahan and the Department of Player Safety. At some point, Shanahan will have to take action against this repeat offender (even though Shanahan's rulings seem similarly based on the uncertainty of chance).

Of course, it's hard to make a ruling against an abstract concept, so how will Shanahan punish Fortune? I wouldn't be surprised if they targeted Fortune's longtime spokespeople by handing lifelong suspensions to Pat Sajak and Vanna White. 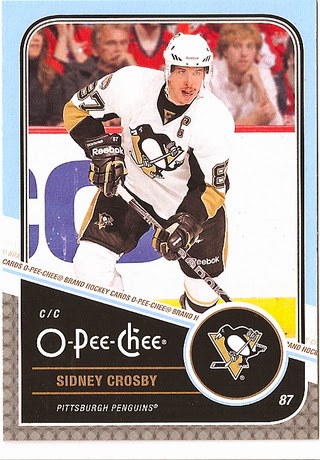 Sajak, of course, is the more brazen offender as revealed in this Sidney Crosby trading card, which captures Sajak attending a Pittsburgh Penguins game. The Wheel of Fortune host later admitted that he was present at the game pictured on the card. However, Sajak has yet to confirm or deny if he was sent to the game by Chance in order to scout Crosby for future misfortune.

If you enjoy reading interpretations of songs when used in unconventional contexts, check out this post from my other blog: www.PhDeserter.ca
Posted by Unknown at 14:32