A hockey blogger criticized Erik Karlsson. What happened next may surprise you.

A little while ago, I was criticizing Erik Karlsson for putting a particularly poor defensive effort into a game against the Boston Bruins. Here is the post in question.

Unsurprisingly, some Sens fans on twitter rushed to the defence of their offensively-gifted blue-liner, blocking shots against him with a number of excuses for his uneven game. If Karlsson could shutdown the opposition with half as much intensity as his fans try to shutdown criticism of him, then there likely would be no criticism of him in the first place.

Fans often explain that the Achilles heel of Karlsson's skillful game is literally Karlsson's Achilles heel. Supposedly, #65 isn't protecting his own team's net very well because he still has not completely recovered from the devastating injury courtesy of Matt Cooke's skate. Here's a link to that incident (lest ye forget). Fans argued that Karlsson still wasn't the same defenceman that he had been prior to the injury. 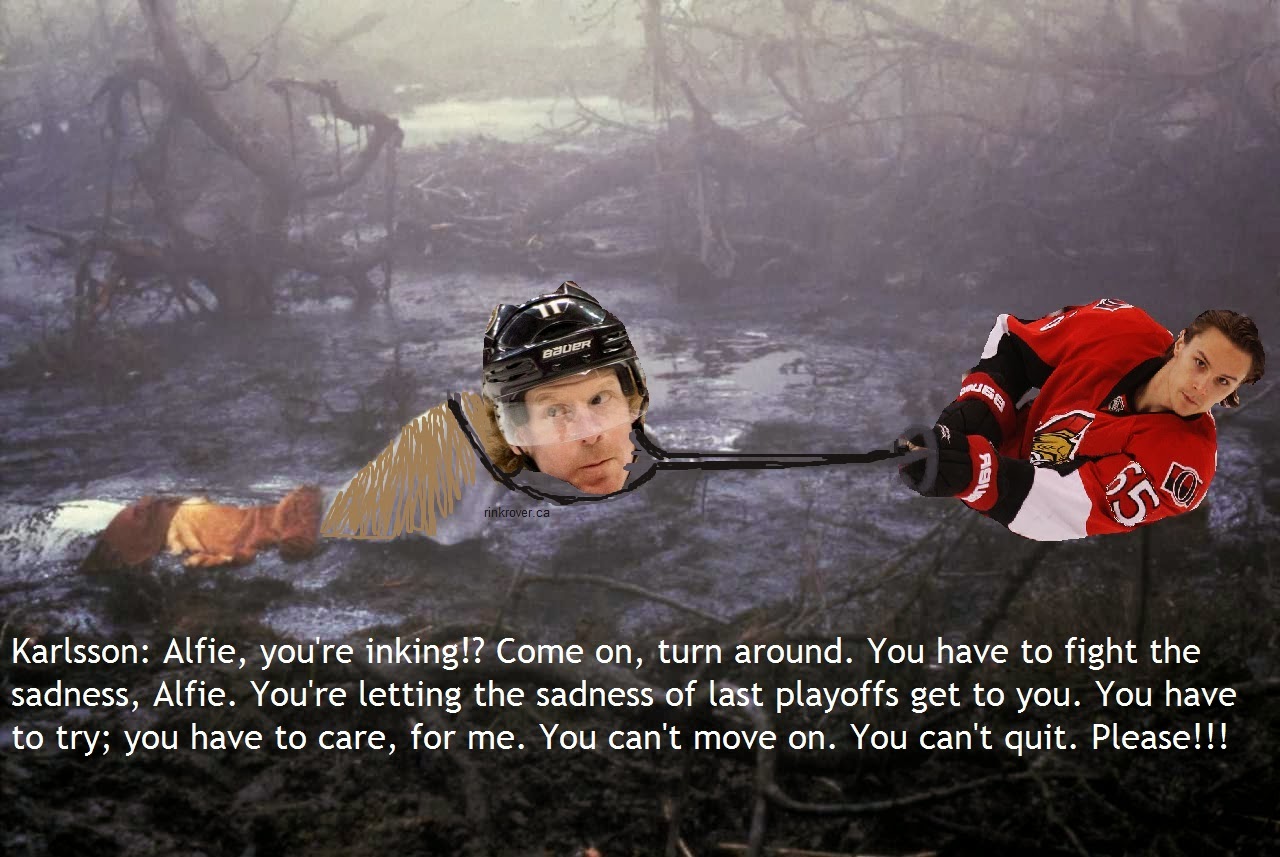 I'd just as soon blame his problems on never fully recovering from the shock of Alfie's departure.

I looked into Karlsson's numbers and found some information that suggests just the opposite: Karlsson is currently playing as well or better than he did prior to the injury.

Karlsson's best offensive season prior to injury was the 2011-2012 campaign. He scored 78 points (19 goals and 59 assists) in 81 games played. He was a mere three points shy of being a point-per-game blue-liner, which is a huge accomplishment for any defenceman not named Bobby Orr. For this achievement, he was awarded the Norris Trophy.

This year, Karlsson has tallied 49 points (12 goals and 37 assists) in 51 games. In terms of offense, he's one point closer to being a point-per-game blueliner than he was in his best pre-injury season. 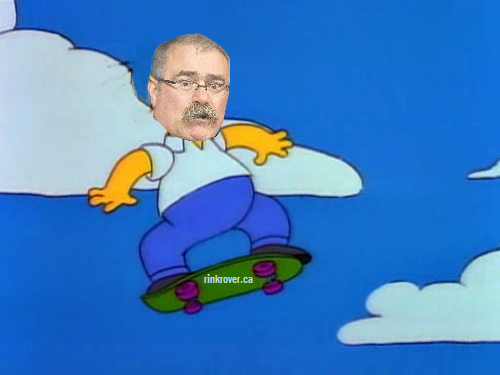 Karlsson's glaringly deficient defensive game, however, cannot be simply attributed to him not playing like the player he was before he was sidelined by Cooke's skate. As Travis Yost's analysis of the Sens' defence suggests, Karlsson isn't playing necessarily worse but differently than he did in his award-winning season. Back in 2011-2012, the Sens had better over-all defense, so Paul MacLean didn't have to rely on Karlsson as much.

This season the Sens' blueline is struggling, which means that Karlsson has to play more in order to compensate the team's shortcomings. Simply put, Karlsson's playing worse defensively because he's playing in more defence-oriented roles.

The bright side is that Karlsson is still very young. At just 23 years of age, he has plenty of time to learn how to shore up his play in the d-zone without detracting from his stellar play in the o-zone. Doing so will make people baffled by his previous NHL award feel less like they're in an episode of the twilight zone in which the league's best defenceman is really a forward in disguise.

MacLean has already started tutoring Karlsson in how to be more reliable in his own end of the rink. As Yost noted, many people (myself included) scoffed when Karlsson won the Norris Trophy despite playing meagre minutes on the penalty kill. 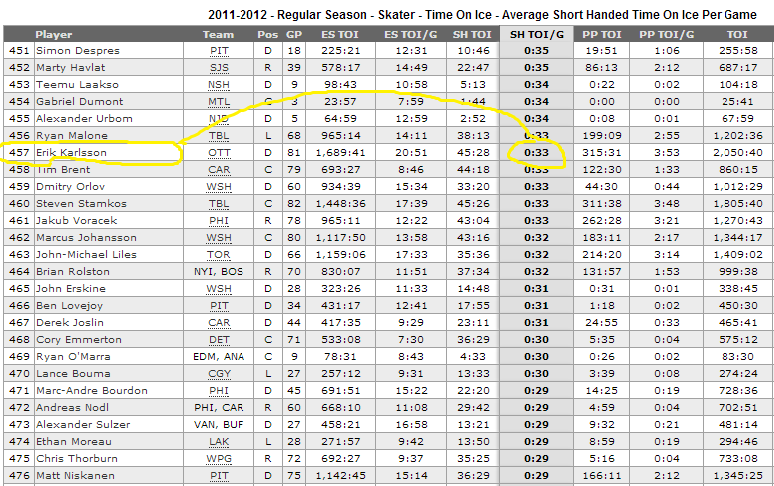 And here's his total amount of minutes played shorthanded during that same season. 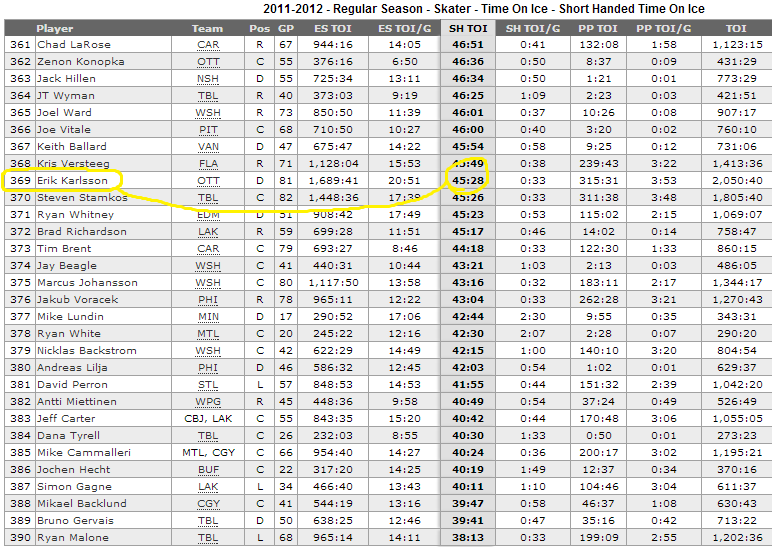 As you can see (after a long squint), 456 other players played more short-handed seconds per game and 368 players contributed more cumulative minutes playing shorthanded than Karlsson did in 2011-2012. That means Craig Anderson's goal posts contributed substantially more to killing penalties than the Sens' all-star defenceman.

To me, a defenceman shouldn't be given top honours if he isn't the go-to-guy when a team needs to kill penalties. Bailing out the team when they're shorthanded should be a defining characteristic of elite defencemen. Although his numbers are worse this season, Karlsson is, in my mind, playing better than he did when he won the Norris because he's learning how to become a well-rounded blue-liner. His -12 rating, then, is really not that bad considering the learning curve involved in enhancing a player's skill set.

Still, it's unlikely that the league would award a player with a double-digit minus ranking, so this learning curve will likely lead Karlsson away from a repeat appearance onstage at the NHL awards. But if he can persevere through these growing pains and become a true two-way defenceman, then Karlsson would silence his critics the next time he wins the Norris Trophy.
Posted by Unknown at 13:47