The season of suspensions keeps rolling along as another noted member of the Toronto Maple Leafs has been ordered to atone for his misdeeds from the sidelines. For a recap of the team's suspensions to date, check out the first installment of The Suspendables.

Here's the latest of the Leafs' league-leading 5 DAAs (Disciplinary Actions Against, a newly-coined badvanced statistic). 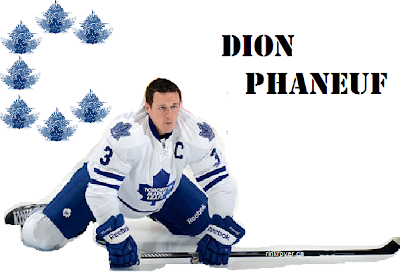 Why he was suspended: Dion Phaneuf's shoulder kinda sorta slammed Bruins' Kevan Miller from behind. To his credit (?) Phaneuf tried to brazen out the incident during post-game interviews on Sunday night. Initially, reporters seemed determined to avoid the issue entirely. They instead asked Phaneuf about the team's struggles with injuries and a feeble penalty kill.

When one reporter finally asked what happened on that hit, Phaneuf's voice became thin but grave as he explained, "I ran into him by accident--tried to turn...and he was coming off. What did you see?" Phaneuf punctuated this rebuttal with a cobalt glare that suggested he was offering a threat in the guise of a counter-question. (Here's the full clip.)


What he should have done instead: This incident will probably make Phaneuf seriously consider signing elsewhere as a UFA this summer.

After all, in this same game Bruins defenceman Dennis Seidenberg delivered a hit to the head of Jerry D'Amigo, and yet he wasn't even given a stern talking-to after the incident. Don't get me wrong: Phaneuf's hit on Miller was certainly worse. Still, it seems that Seidenberg got a pass because the NHL thinks that the B's will have been suspended enough once Shawn Thornton serves a double-digit leave-of-absence for blindsiding and bludgeoning Brooks Orpik. (Recap.)

The NHL, however, seems to think that the Leafs can't be suspended enough. If Phaneuf had been playing for the Nashville Predators, Brendan Shanahan probably wouldn't have even questioned him about his hit on Miller.

After all, Shanahan saw no reason to discipline Shea Weber after he grabbed Henrik Zetterberg's head and bashed it directly into the glass.

Full disclosure: this gif has been sped up slightly, perhaps to make it sync with Verdi's "Anvil Chorus." (Gif source)

How could Weber possibly defend this infraction? Did he mistake Zetterberg for a Pez dispenser!? (Source.)

Bad Luck or Unexpected Cropportunity? One potentially positive outcome of Phaneuf's suspension is that it will give Leafs Nation a chance to see what the team would be like if the controversial captain shrugs off the blue-and-white in the off-season.

If the Leafs somehow manage to outdo their often-incompetent defensive play, fans will likely hop on-board with Dave Nonis' plans to re-sign Phaneuf. If the Leafs suddenly play a consistent, energetic, and engaged game, fans will be able to justify criticizing Phaneuf for deficiencies in his leadership.

What do you think? Will team morale soar with the hotly-contested captain removed from the lineup, or will Phaneuf's absence incite six periods of unmitigated meltdowns in the Leafs' d-zone?
Posted by Unknown at 15:23