Some teams take losses in stride, but the Sharks apparently take losses like a bunch of swaggering braggarts. Last night, San Jose were beaten 5-1 by the Pittsburgh Penguins, and yet they reacted to the loss in an unexpected way: they threw Penguins starter Marc-Andre Fleury under the bus.

Now, Fleury is certainly fair to criticize on most nights as he's practically the poster boy for soft goals. I honestly have no idea how he hasn't gotten a sponsorship deal with Charmin. 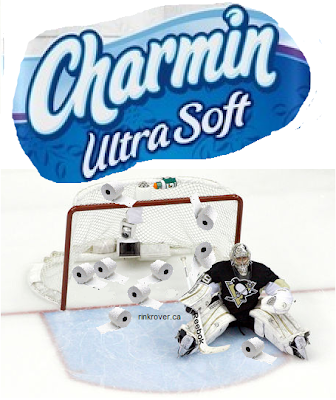 Last night, however, was an exception: Fleury made 44 saves on 45 shots. Sure, some of those saves might be chalked up to luck, but a goalie's luck must run out somewhere around the 35th attempt on goal.

Meanwhile, at the other end of the ice, Sharks starter Antti Niemi was benched after allowing 4 goals on 27 shots. Niemi's .852 save percentage was the second-worst of the night as his replacement, Alex Stalock, only successful stopped two of the three shots directed at him in his 19:51 minutes of time on ice.

So how can the Sharks possibly justify criticizing Marc-Andre Fleury's play?

Logan Couture remarked that Fleury's save percentage did not reflect his composure. When a reporter asked if the team suffered simply because they had "run into a hot goalie," Coture replied, "Stats aside, I don't think Fleury was that good tonight: he gave up a lot of rebounds and a lot of shots he looked shaky on." (Here's the full interview.)

Sure, the Sharks may have lost the game based on the scoresheet, but Fleury utterly lost the even more important game-within-the-game: the battle to appear more poised than the opposition.

Joe Pavelski similarly criticized Fleury's rebound control by drawing on a little-known advanced stat: wishful thinking. Pavelski noted, "[Fleury] was fighting it all night. It felt like we could've had five [goals]." Pavelski's absurdly partisan comments should earn him the nickname "Jingo Joe."

The league can then award the player with the highest gross points by presenting him with the Neville Chamberlain Trophy for outstanding achievement in the field of wishful thinking. The award is an umbrella made of iron pyrite. 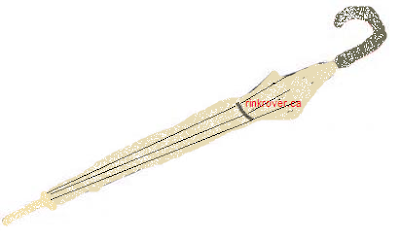 This joke might not make sense now, but it would have been a riot back in the 1930s when Chamberlain was typically satirized in political cartoons by his ubiquitous umbrella.

As Mark Halford observed, this isn't the only lopsided loss that the Sharks boasted after a beat down. Following a 5-2 loss to the New York Rangers on October 31, 2011, Joe Thornton referred to the victors as the softest team that the Sharks had played on their six-game road trip. At the time, the Sharks were wrapping up an otherwise successful stint away from the HP Pavillion (now SAP Center) as they went 5-1-0 on the road. Yet somehow that one loss ruined all of those gains.

So how did Thornton react to the loss against Pittsburgh yesterday? Unlike his teammates, he handled the situation modestly--although I'm still tracking a rumour that Thornton defended Niemi by saying that he'd perform an act of autoeroticism on the ice if he only gave up four goals in a game.

It's astounding that San Jose takes regular-season losses so poorly. It's not only surprising because no team has ever gone 82-0-0 in a season, but also because you'd think that the Sharks would be used to disappointment after frequently floundering in the playoffs. Maybe they'll learn some much-needed humility this spring after one more cup crash, but I wouldn't be surprised to see them raise banners to commemorate the years in which they, according to Jingo Joe, could've won the cup.
Posted by Unknown at 16:08