From the Hot Seat to the Not Seat: Erik Karlsson and Tuukka Rask Embarrassed

There were two strange incidents on Saturday night during a game between the Boston Bruins and Ottawa Senators at Canadian Tire Centre in Ottawa.

Midway through the second period, Sens goalie Craig Anderson took a penalty for tripping Bruin Reilly Smith. In such situations, most fans would be surprised if a team's premiere defenceman wasn't on the first penalty-killing unit charged to dispatch the powerplay. Such fans would be flabbergasted to see the score sheet from the Bruins-Sens match:

(That yellow circle is my finest MS Paint work yet.)

Norris-winning d-man Erik Karlsson wasn't even allowed on the ice when his squad was shorthanded.

Apparently Karlsson is head coach Paul MacLean's go-to-guy to serve penalties incurred by the team's goaltender. Personally, I'm thrilled with this decision because I often get into arguments for suggesting that Karlsson excels at everything except playing defence. Now I can use Saturday's game as proof that Paul MacLean agrees with my opinion of the Sens' offensively-gifted/defensively-deficient blueliner.

For further evidence of Karlsson's suspect defensive game, take a look at this Bruins goal scored midway through the first period. Daniel Paille blows by Karlsson with ease and scores a goal that was both unassisted and unimpeded. Anderson must have looked dumbfounded as he watched Karlsson shy away from making a check--a lazy effort that allowed Paille to break for the net effortlessly.

As this video demonstrates, when Karlsson is the only man standing between an opponent and the Sens net, Anderson is virtually defenseless.

Ultimately, the Karlsson fiasco suggests that the NHL Awards are broken: how can the league award the trophy for the best defenceman to a guy who doesn't even have his coach's confidence? Perhaps it's time to introduce a separate trophy to award offensive defenceman so that the Norris can be awarded to blueliners who excel at playing defence.

I get the notion that coaches should ride a hot goalie, but Rask was at the apex of good goalie fortune; there was no place for his confidence to go but down. On Friday, Rask had a solid 33-save shutout against the Sens at TD Garden in Boston. How could he reasonably outdo that performance in the second half of the home-and-home series against Ottawa?

Since it's absurd to expect Rask to outdo himself, it would have been better to let the team's starter enjoy the decisive win for at least a full day before putting him back in action. Instead, Julien put him in a situation in which he was almost certain to fall short of the expectations created by his performance on the previous night. Sure enough, Rask was benched from the net after allowing 3 goals on 12 shots.

What's worse: by setting Rask up to disappoint himself and the team, Julien emboldened the opposition that was embarrassed by Rask the night before. They not only exacted revenge on Rask by breaking his bid for back-to-back shutouts, but they also had the satisfaction of chasing him from the net. As a result, the Bruins ended up chasing most of the game as against a team that thrives on schadenfreude.

Thus Julien's rash decision resulted in Rask being subjected to the highs of a shutout to the lows of being benched in less than 24 hours. 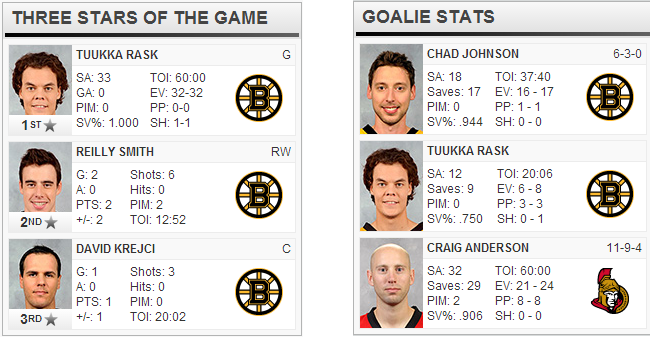 Rask's fortunes fall from first-star of the night on Friday (pictured left) to an "also ran" on Saturday (pictured right).
Posted by Unknown at 18:41