Dear Sens fans, Alfie's just not that into you

Among the defining characteristics of Leafs Nation are a relentless (although often shamefaced) support for the blue-and-white, and an uncompromising abhorrence of Daniel Alfredsson.

During previous installments of the Battle of Ontario, viewers could count on two things: seeing more blue than red in Scotiabank Place, and hearing Alfie booed by Toronto fans. Responding to the later phenomenon, Hockey Night in Canada's Jim Hughson often mused on-air about whether or not Leafs fans knew why they were booing the Sens longest-serving captain.

Well, I hope Hughson was watching Alfredsson's homecoming game yesterday as the highlight reel cleared up the issue. Here's the clip in question:


Based on this clip, the Senators organization considers Alfie's most celebrated actions include mocking Mats Sundin and delivering a dirty hit from behind on Darcy Tucker. Peter Raaymakers offers a recap of these incidents in a Silver Seven Sens post unironically titled ""Top 10 moments from Daniel Alfredsson."

Sens Army's again expressed this lack of irony when lauding Alfie's disdainful and dirty sportsmanship as #11's most infamous moments were replayed to the tune of U2's "Beautiful Day". As a result, this clip has probably set Ottawa back decades in its attempts to forge an autonomous team identity.

While offering Sens Army exactly what it likes to see in a game, the tribute nevertheless contributed to the impression that the franchise isn't a hockey club in its own right so much as a team founded in loyal opposition to the Leafs. If Ottawa ever wins an NHL championship, I would be surprised if they opted to follow the convention of having each player's name engraved on the Stanley Cup instead of asking for "Leafs Suck" to be chiseled onto the trophy.

I had hoped that Sens fans would boo Alfie throughout the game yesterday in order to prove that they were, first and foremost, fans of the team that Alfredsson happened to captain for a long time, not fans of Alfie and fairweather friends of the local NHL team.

Alfredsson gave them plenty of reasons to boo him. In the on-ice interview ahead of the game, Alfredsson added insult to his injurious absence from Ottawa's roster by openly remarking that the struggling Sens were desperate for a win in that game. Unfortunately, no one asked Aflredsson if he thought the Sens could make the playoffs, so viewers at home weren't treated to another "probably not" speech.

Alfredsson was also asked how he felt about all the hoopla surrounding his return, which he scorned in saying that he'd just like to get the game going. This indifference toward his adoring fans suggests how little Sens Army means to him. Sure, he said all the right things after the game by calling the experience humbling and unforgettable, but, when he had his game face of, he couldn't seem to care less about the outpouring of support for him.

Ironically, the Red Wings were the only ones to razz Alfredsson by making him wear the scarlet letter during the game. 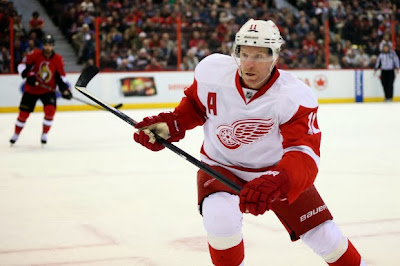 The "A"  actually stands for adultery, right?

In contrast, Sens fans gave him a hero's welcome complete with an acrostic poem of questionable literary merit. 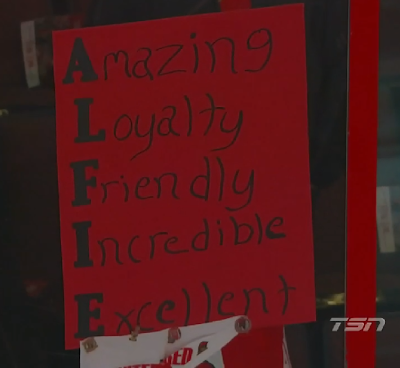 Aside from the obvious problems with parallelism (the single noun seems out of place among the four adjectives), the poem perpetrates a heinous act of historical revisionism by praising Alfredsson, who abandoned the team that he had captained for17 years, for his supposed loyalty. Praising Alfredsson for being loyal is like honouring Robespierre for his clemency, Stalin for his philanthropy, or Erik Karlsson for his defensive prowess. (Oh, wait, the NHL actually did that last one.)

As though one fan's uncritical adulation wasn't bad enough, the organization as a whole similarly indulged in similarly shameless hero worship by using U2's "Beautiful Day" in the opening montage. In the context of the homage to Alfie, the lyrics "I know I'm not a hopeless case" and "What you don't have you don't need it now" seem to be shamelessly begging Alfie to put aside his dreams of winning the cup with Detroit and come back to the Sens.

Apparently, the organization hasn't figured out how to handle being dumped even after what happened with Alexei Yashin, Dany Heatly, and Zdeno Chara. Sens Army is never going to gain closure and move on with the franchise until someone pulls them aside and says, "Alfie's just not that into you."
Posted by Unknown at 17:03