Back in Black (and Gold): A first-hand account of Jarome Iginla's return to Calgary

WARNING: The following is an unabashed fan post. I went to the Flames-Bruins game last night, so I thought I'd offer my biased thoughts on the return of Jarome Iginla.

Prior to this game, sportscasters tried to ramp up controversy regarding Iggy's return. True, they admitted, Iginla did what was best for the team last year by accepting the trade, but, hockey writers argued, the Flames could have received a better return for him had he not nixed a trade to the Bruins--the club he would later sign with upon becoming a free agent later on. 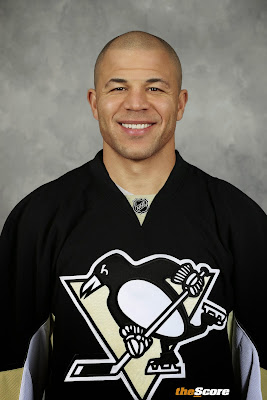 Pictured: a dubious source of controversy.

Their efforts were geared toward creating a compelling story for the event, but I also wonder if they were trying to take some heat off of Daniel Alfredsson after he deserted the Sens last off-season. Unlike Alfie, Iggy seemed reluctant to leave his team after becoming its longest tenured captain. He never told reporters that the Flames were "probably not" going to compete in the playoffs--not even during the team's worst struggles following their last appearance in the Stanley Cup Final back in 2004.

Iginla's first game at the Saddledome since being traded last season was a raucous event, but I didn't detect any of the resentment that members of the hockey media hoped to hear last night. The boisterous "Iggy" chants began as soon as the former captain took the ice for the pre-game warm up. This spontaneous fanfare would be heard throughout the evening as fans heralded Iginla's every shift in hopes that he would score a goal for them.

The opening announcements and national anthems were almost completely derailed as the fans' chants overpowered the stadium's loudspeakers, forcing Canadian nationalism to take a backseat to a rival form of patriotism that night.

The match itself seemed like an afterthought compared to the excitement during the pre-game entertainment--especially the tribute video and the standing ovation for Iginla.


Note that the official tribute video does not include clips of Iginla concussing the fan favourite or mocking the captain of a provincial rival (a.k.a. "the Alfredsson special.")

Following the video, the bashful Bruin embraced the outpouring of support by giving fans a wistful smile and a humble stick salute. Clamouring for an encore, the crowd's standing ovation continued to cheer until Iginla took another circular skate in recognition of the support. His tearful gratitude made the delay of game worth it.

This outpouring of support also had an affect on Iginla's new teammates. At first, Milan Lucic looked confused that fans were making such a ruckus when Boston hadn't even blindsided or bludgeoned an opponent yet.

Milan puzzled and puzzled till his puzzler was sore. Then Lucic thought of something he hadn't thought of before. "Maybe hockey," he thought "isn't measured in gore. Maybe hockey...perhaps...means a little bit more."

Moments later, Lucic seemed to appreciate Iggy's importance to Calgary and that though made him smile, which is surreal to see as I assumed Lucic didn't smile unless he was watching highlight reels that showed only kill shots from nature documentaries.

When the puck finally dropped, chaos ensued as the home crowd abruptly switched from cheering the Flames to the Bruins whenever Iggy was on the ice. The fans even booed some defensive plays that took scoring chances away from #12. The booing became venomous when the former captain was denied an empty net goal in the dwindling seconds of the third period. Even though the home team had a chance to make a comeback late in the game, Flames fans were desperately hoping that Iggy would clinch a 3-1 win for the Bruins.

If I had been watching at home, I might have scoffed when Iginla was given the third star of the game. After all, he didn't notch a single point that evening. However, having seen the game first-hand, there was no question that Jarome Iginla's mere attendance was the main event that night. Iggy deserved at least the third star of the evening on account of the fact that his long-awaited homecoming defined the entire game.

UPDATE: 10:10PM, December 11: In the original post, I forgot to add the best part of the game. Following the game, the Flames played the Iggy Dance even though #12 didn't score. In case you haven't seen it, I've pasted it below: enjoy!