While sorting through hundreds of items on nhl.com the other day, I came across some hilariously awful Bleacher Creatures--plush toys that are (allegedly) based on current NHL players. Here are the best of the worst. 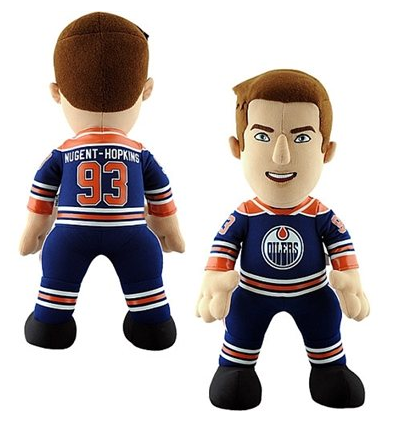 When I first saw Nugent-Hopkins' Bleacher Creature, I immediately assumed that the manufacturer had made some sort of error: that head clearly belongs to some other player as it doesn't even vaguely resemble Nug-Ho. I'm guessing that the designer ran out of time and put Peyton Manning's head atop an Oilers' body.

Come on, there's more than a slight resemblance here.

My second reaction was one of concern: why is a tuft of Nug-Ho hair sticking out on one side? Is #93 known for having day-long bed head, or is he sprouting an antler here? 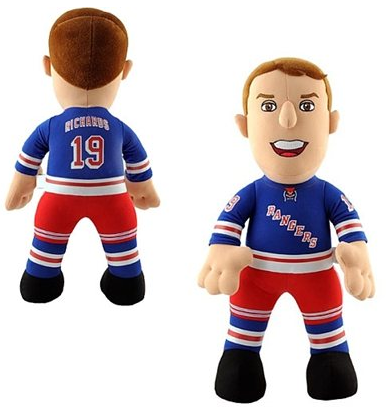 Of all the pictures of Richards that the designers could have used, they apparently settled on one that shows him in the violent throes of a sneeze.

6. Business in the O-Zone, Party in the D-Zone 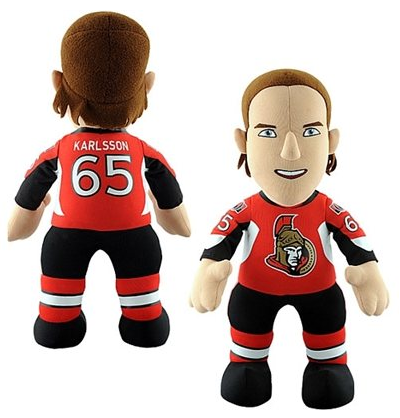 Now, you might argue that the long hair at the back is supposed to be the same length as that in the front. However, the hair in front is close to the scalp whereas the latter strands dangle freely. That can only mean that plush Karlsson is rocking one of the most starkly pronounced ever: a crew cut with mullet fringes. Yikes!

When determining the concept behind the Tyler Ennis doll, the makers apparently chose the idea "ultra-frigging-Aryan" and ran with it: 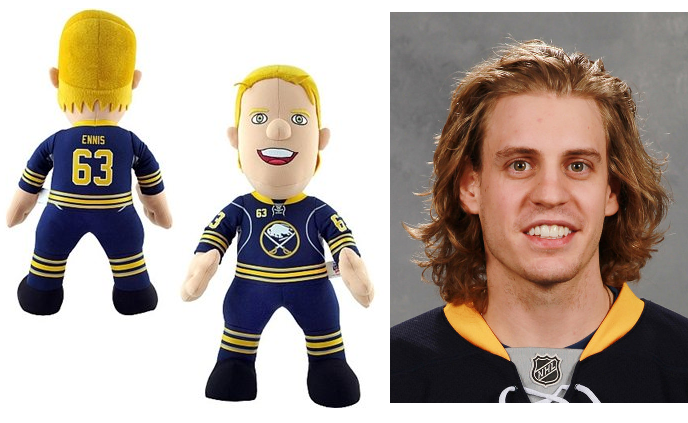 There's no telling where they got that noxious yellow, but it seems likely that the manufacturer used the Sabres' abundance of unsold third jerseys.

While some Bleacher Creatures look nothing like the players after whom they are fashioned, others look freakishly similar. Take, for instance, Evgeni Malkin: 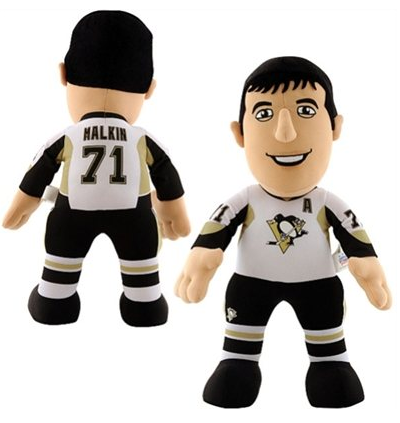 This doll make the manufacturers look bad for not achieving this same level of similarity with the other plushified players. The only thing that sets this doll apart from Malkin himself is the smile: when does Malkin ever smile? The smile is particularly creepy because it makes this Bleacher Creature seem more human than the emotionless man of Magnitogorsk.

While the Malkin Bleacher Creature may have more soul than its namesake, the Daniel Sedin doll seems intent upon eating your soul: 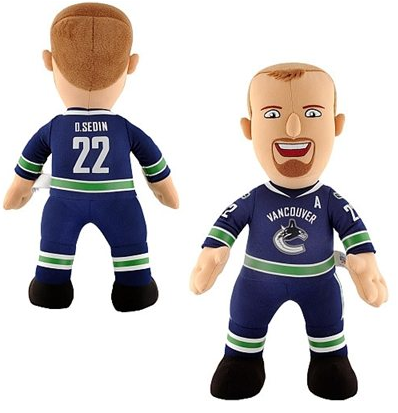 Unlike with most toys, parents can extort good behaviour from kids by threatening to make them play with this ravenous replica. Luckily there's a forelock that kids can grab to keep Sedin from biting them: otherwise, I think the infectious bite will turn their flesh-and-bones into plush-and-stuffing.

To their credit, the designers dared to dream big when they ambitiously tried to tackle a difficult specimen in Scott Hartnell and his unruly hair. Despite their grand aspirations, the product is rather underwhelming:

They've basically given Hartnell the same hairstyle as Chewbacca's: matted on top, mangy at the back.

I'm not sure how one could truly capture the unwieldy nature of Hartnell's hair adequately, but I think that sticking the head of Fozzie Bear on this doll would have yielded a much better result.

"What do you call a radioactive goalie? Roberto Luon-glow! Waka! Waka!"

I don't want to beat the "this doll doesn't look anything like the model" joke to death, but the Ryan Kesler Bleacher Creature is exceptional. Take a look at Kesler's Ronald McDonald hair: 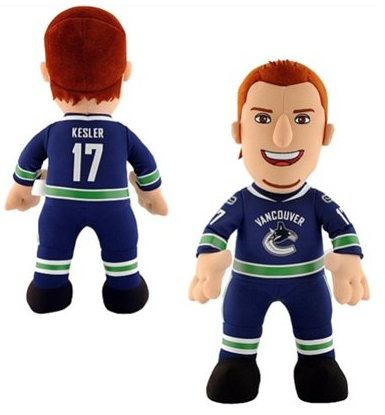 Did you know that Kesler was as ginger as an animate cookie in a wolf's mouth? Me neither--and that discrepancy makes me think that the folks responsible for the Bleacher Creatures actually intended to make a Cory Schneider doll.

Assuming that Roberto Luongo would be traded, the company moved ahead and foolishly produced an arsenal of Schneiders before the jilted goaltender was dealt to New Jersey. Following the trade, the company (I assume) went into damage control and slapped Schneider's head on a Kesler body in the hope that none of us would notice.