In case you haven't noticed, a vocal contingent of Leafs fans are still upset about Dave Nonis' decision to buyout disgruntled centre Mikhail Grabovski last summer. While every move made by the Maple Leafs is heavily scrutinized, this buyout has caused dissent of Guy-Fawkes proportions. 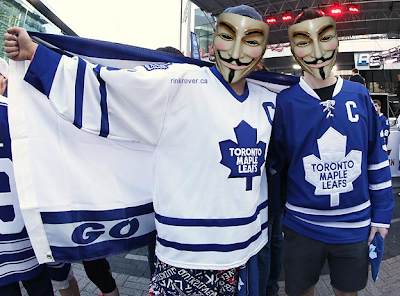 I hate to say it, but I miss the old days when despondent fans would simply wear paper bags over their heads.

I wasn't thrilled about the move when it happened, but I quickly came around after two developments: Grabo's (*cough*) "professionalism" when departing the team, and the Grabovski worship (a.k.a "Grabophilia") that followed #84's departure.

I understand that it must be awful to see one's favourite player given a dishonourable discharge via compliance buyout. Still it seems that by now (over 4 months later) people should be moving toward acceptance as per the 5 Stages of Grief.

When word of the buyout first broke, many fans experienced the first stage of grief (denial and isolation): they went on twitter to express incredulity over MLSE's purported stupidity, or they signed out of social media entirely because they couldn't bear the bad news.

Others jumped immediately to the second stage (anger) by denouncing Randy Carlyle and Dave Nonis on twitter. Their tweets represent the first time that a head coach and GM have been publicly charged with treason against Toronto's hallowed hockey club.

Less than a month after the buyout, bloggers entered the third stage--bargaining. Posts (such as this one) diligently put together scenarios in which the Leafs could keep Grabovski, let Bozak walk, buyout John-Michael Liles, and lead the team back to the promised land after wandering in the desert of their 46-year Stanley Cup drought.

Since that time, progress has halted entirely. Less than two weeks ago, one prominent hockey writer added the latest delusional installment of bargaining.

Putting aside the fact that this idea had been proposed two months earlier, let's focus on the more important point ignored by Grabsessed writers. Nonis didn't panic about the salary cap and foolishly buyout Grabovski. He bought out #84 because MLSE didn't want him in the organization anymore--not in the top six, not in the bottom six, not even in the Raptors' lineup.

Let's face it, MLSE's dislike must have been very strong if they didn't even want to exile Mikhail to the Raptors.

While the bargainers have refused to move forward, other commentators have ironically taken steps backward in dealing with grief. Grabo has long been the darling of the advanced stats community. These bloggers are known for two things: testifying to the greatness of the "Belarusian Biter" and preaching that the Leafs will, at some point, regress (i.e. lose more games) due to unsustainable stats (e.g. shooting percentages).

Given these fundamental beliefs, it's rather ironic that they themselves are regressing presently in their Grabo grieving. When Tyler Bozak and Dave Bolland fell to injuries in quick succession, twitter flooded with sarcastic tweets that rebuked Nonis for not signing highly-prized UFA Mikhail Grabovski when a moronic GM made him available last summer. Grabo clearly has some circean ability to morph devoted Leafs fans into a bunch of nose-less face-spiters. 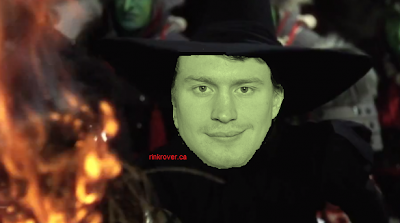 Seriously, has anyone in the fancy stats community considered the likelihood that Grabo's possession numbers stem from necromancy?

The overarching irony is that fans are acting hostile toward the Leafs rather than being happy for Grabo. Since leaving the Leafs, Grabo has gone notched 14 points in 15 games with the Washington Capitals. You'd think that would make the Grabophiles happy, right? Wrong--they use his performance to harangue the Leafs for mismanaging their roster.

To recap, Grabo wasn't happy working with Carlyle, and Carlyle wasn't happy with Grabo. The buyout offered a way for the two sides to part amicably. Grabo is doing well with Washington while the Leafs are winning without him. Hurt feelings and misgivings about the Leafs' depth at centre aside, isn't this the best possible outcome for both parties?
Posted by Unknown at 16:00