Brendan Shanahan of the NHL's Department of Player safety has suspended Carter Ashton of the Toronto Maple Leafs for his illegal hit on Derek Smith of the Calgary Flames.

According to Shanahan, the hit was "extremely dangerous" and could have been avoided. Alternatively, Ashton could have minimized the impact by not extending his arms in following through with the illegal check.

And so #37 goes from receiving a two-minute penalty to a two-game suspension for the same hit. Ashton has never been fined or suspended for actions in any of his previous 24 NHL games, and the incident in his 25th did not cause an injury.

I'm not necessarily objecting to the fact that Ashton was suspended. He clearly hit Smith from behind and launched the Flames' defenceman into the boards. However, I am taking issue with the reasons for suspending him and not other players.

If Ashton deserves to be suspended for a dangerous hit that didn't end in injury, then Mike Fisher of the Nashville Predators should probably be exiled to the Greek Elite League (if such a hockey organization exists) for his potentially devastating hit on Cody Franson. 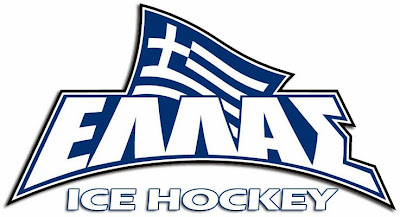 UPDATE: Yes, such a league does exist, but it is called the Hellenic National Ice Hockey Team. I have not heard back if the team is nicknamed the "Trojan Horses" or "Greek Fires."

On October 10, Fisher rammed Franson face-first into a stanchion. The dangerousness of the play could have been minimized had Fisher not extended his arms. Instead of merely colliding into the barrier, Franson became the unfortunate cream filling in a Fisher-stanchion Oreo. While Derek Smith played on after the hit from Ashton, Franson had to leave the game after surfacing from the pool of blood that formed as he was sprawled out on the ice.

Fisher was given a game misconduct for delivering one of the dirtiest types of hits in the game--one made infamous by Zdeno Chara--but he didn't receive any supplemental discipline from Shanahan. Fisher wasn't even reprimanded, which is disappointing as Shanahan often balances his inconsistent brand of justice by reprehending players such as Rick Nash for dirty hits.

Some might say that the ejection from the game was punishment enough for Fisher, but Ashton's retributive beating at the hands of Shane O'Brien was a comparably sufficient form of punishment. Based on his comments on enforcers, I think that Flames exec Brian Burke might feel the same way. 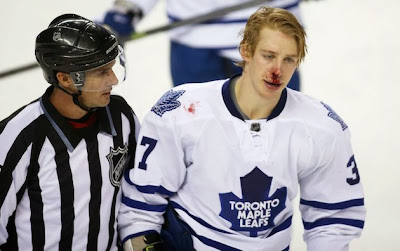 This picture (source) won Ashton a walk-on (or "shamble-on") role in The Walking Dead.

So why was Ashton punished more harshly than Fisher? Is the league desperate to avoid the wrath of Carrie Underwood, who was (to the chagrin of every female hockey player) voted one of the most influential people in hockey by The Hockey News? Is the league concerned about tarnishing Fisher's reputation as "a man of faith on the ice"?

We may never know what unseen hands tip the scales of Shanahan's justice, but we can certainly count on being blindsided by the inconsistency of the league's future rulings.
Posted by Unknown at 19:21