A Requiem for Team Toughness, or, Bonnie Reimer & Clyde Bernier

In keeping with my recent slew of A Tale of Two Cities references, it's safe to say that Wednesday night's Leafs-Penguins match was the worst of games and the worst of games for both teams. Evgeni Malkin's shootout victory offered Pens fans closure to a tumultuous, and it gave Leafs nation further evidence that there is either no justice in the universe or the hockey gods truly hate Toronto.

In some ways, last night's game was worse than the Leafs' playoff loss last postseason. The buds were at least playing hockey in that dreadful Game 7 defeat to Boston. Wednesday's "efforts" suggest that the club has taken a huge step back in its progress. Now is probably the time to commemorate the passing of a key part of the team's identity. 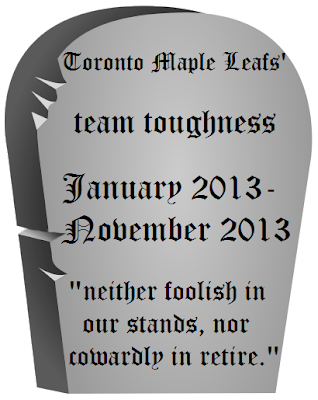 Did Leo Komarov siphon all of the truculence out of his former teammates before returning to the KHL? How else can we explain why the Leafs have lost their much-touted toughness? On Wednesday, they let Malkin crush Phil Kessel along the boards, cross-check Mason Raymond in the face, and slash Bernier in the chest with impunity. This inaction emboldened Malkin to boll Bernier over and score the tying goal as the defenseless goalie looked on while sprawled in a heap at the back of his own net.

Of course, that goal, as even a Penguins hockey writer has observed, should have been waved off as a flagrant case of goaltender interference. Regardless, the Leafs never should have let the game come to a point in which Malkin felt safe enough to manhandle Bernier like that.

Sending Malkin a message would have been a first step toward reclaiming the team's identity, but it certainly would not be a panacea for all that ills the Leafs lately.

Last year's team worked hard to earn wins. Those wins weren't always pretty, but it was fun to watch the Leafs play through some tough games and come out as victors more often than not. This year's team seems to garner nothing but fluky wins and lopsided losses. When they win, it often feels like the team is getting away with something, and, when they lose, it seems like they're getting some much-deserved comeuppance.

I'm not generally interested in stats, but I'm sure everyone can agree that there is a problem when a team gets routinely outshot by a wide margin. Unfortunately for the Leafs, Wednesday night's game did not mark the first time that they have been outshot by a 2:1 ratio (48-24). The Leafs have basically turned James Reimer and Jonathan Bernier into the "Bonnie and Clyde" of goaltending tandems--meaning that they are wildly shot up when their posse (i.e. the defence) deserts them. 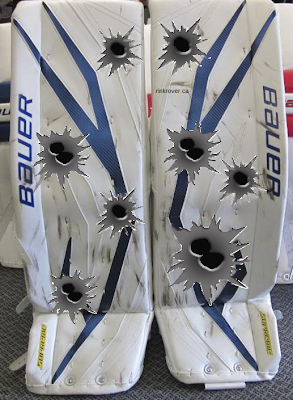 Reimer's pads shouldn't look like this after every game.

This problem with shots is an issue of common sense rather than a matter for advanced-stats analysts alone to dissect. We can all agree that it's detrimental to let Reimer and Bernier get shelled in every game. At this rate, they will both develop post-traumatic stress disorder by Christmas. The Leafs' crease has essentially become a war zone, and I'm not sure if anyone--let alone the team's young goaltenders--can handle the psychological strain of this blitzkrieg in the blue paint.

Head coach Randy Carlyle generally assesses the club's woes as a problem with consistency. However, getting outshot and out-chanced is perhaps the only thing that the Leafs have been doing consistently, and it doesn't seem to be working.

Following Wednesday's loss, Carlyle also suggested that the team gave up momentum in the game by taking too many penalties--some of which were soft calls. That may have swayed the advantage toward the Penguins for a time, but the Leafs weren't exactly shorthanded for those 25 shotless minutes of game play last night. They utterly relinquished the game to the Pens, and it's amazing that they managed to salvage a point from the debacle.

Hopefully the team can turn things around, but right now I'm not sure if the team can actually be classified as a hockey club given their inability to put puck and net together. At the same time, the team's defencemen have been chasing the puck around in their own zone like a bunch of catnip-crazed cats pursuing a laser pen's beam. 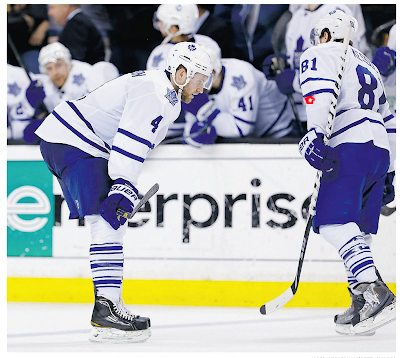 Quit staring at the laser beam and play some defence, Franson!

I'd like to see the team get back to winning, but after Wednesday, I'd be just be happy to see the Leafs play something resembling a hockey game tonight against the Sabres.
Posted by Unknown at 02:59