What to expect from the cash-strapped Sens

Without clarifying the reasons for the team's financial misfortune, Melnyk has left baffled hockey writers to ponder how a Canadian team in a major city loosely-incorporated suburb could lose money.

I speculate that there are two primary causes for the team's monetary hardships.

Some cats chase mice, but Spartacat chases vice. The Sens' mascot has a long track record of reckless behaviour. For instance, here's a video of him blatantly littering on camera.

Casting off stray pieces of paper astray, however, isn't Spartacat's only act of careless littering: he's also the subject of numerous paternity suits lodged by various humane societies located throughout North America. At one point, a legal team had to work nonstop to devise out-of-court settlements for the dozens of paternity suits that arrived daily. 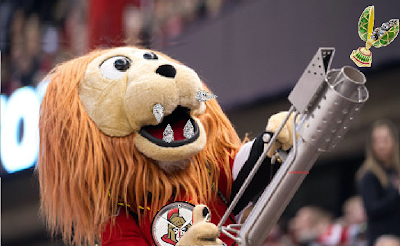 He also wore a diamond grill and a Flavor-Flav inspired Sens clock.

To his credit, Melnyk reportedly took the blame for Spartacat's incorrigible behaviour: he curbed these problems by paying to have the froward feline neutered.

Ever wonder how Daniel Alfredsson has managed to play competitively into his 40s? His secret doesn't have anything to do with genetics or off-season conditioning. No, the answer is simple: he's a vampire.

Alfie spends the off season building a new fleet of coffins and filling them with soil from his native Gothenburg, Sweden. Once stashed around NHL markets, these materials help Alfie rejuvenate during wearying road trips.

Here's a picture of Alfredsson taken shortly after a grueling NHL season. 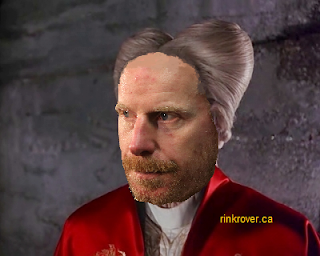 Due to quirks related to being a vampire, Alfie's shadow gets credited with an assist whenever he nets a goal.

This prep work costs thousands on top of the expenses associated with concealing the many victims of Alfie's vampiric blood lust. Thus it's no surprise that the Sens quibbled with their former captain over his salary demands last July.

Before you mention having seen Alfie in daylight, keep in mind that some folklore traditions (e.g. Bram Stoker's Dracula) maintain that vampires walk about in the day, but their powers are weakened. So, Alfie's poor play in the upcoming Winter Classic matinee game should confirm his undead status.

Since Alfie's departure and Spartacat's neutering, the Sens have diminished two major sources of financial hardship. Yet they still need to recoup losses accrued over the last decade. Here are some austerity measures that we might see the franchise enact in order to make a profit in the near future.

1. Murray must make due

On top of imposing an internal salary cap, Melnyk will slash front-office expenses by laying off the organization's scouting staff and downgrading its technological resources. To help Murray multitask during the trade deadline, Melnyk will crazy glue a Zack Morris phone to Murray's ear so that the GM can send paperwork via carrier pigeon while he continues to take calls from colleagues. 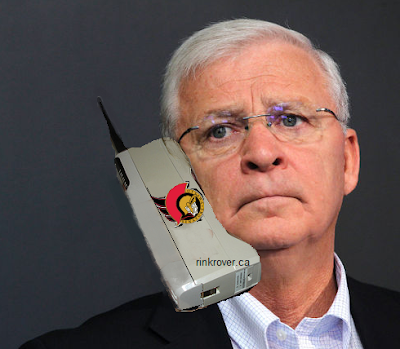 Although the Sens aren't experiencing any salary cap crunch, they will reduce costs associated with their hockey operations by having long-tenured defenceman Chris Phillips declared a UNESCO World Heritage Site.

This proposal will honour Phillips' dedication to the team. Unlike franchise players such as Alexei Yashin, Danny Heatley, Marian Hossa, Zdeno Chara, and Daniel Alfredsson, Phillips has never demanded a trade, held out during contract negotiations, refused to take a pay cut for the team, or walked away as a UFA over Melnyk's miserliness.

By making Phillips a heritage site in recognition of his unique willingness to be a career Senator, Melnyk would receive funding to ensure that tourists can visit the team's rare cultural artefact.

The Sens will stop providing Gatorade on the bench during games. Instead, water bottles will be filled with a mixture of Kool-Aid and crystal meth. At first, this measure will incur expenses as players chew through several mouth guards each night. However, those expenses will eventually drop along with the players' meth-rotted teeth.

During home games, the Sens will hold the "Anyone Can Be a Senator" fan contest. The winner will get to serve as a linemate during an actual NHL game (after he or she signs both a waiver regarding potential injury and an agreement to donate their league-minimum salary to a charity of Melnyk's choice). The charity will most likely be the Senators' "Help Stop this Contest" foundation for fans permanently injured after being conscripted into on-ice service.

5. Throwbacks that throw waaay back

In order to cut equipment costs, Melnnyk will introduce prelapsarian throwback jerseys. These outfits will allow players to skate as Adam and Eve did in the Garden of Eden. Should anyone complain about the franchise's decision to ice an entire lineup of naked men, the players will be instructed to put on Sens-themed fig leaves. 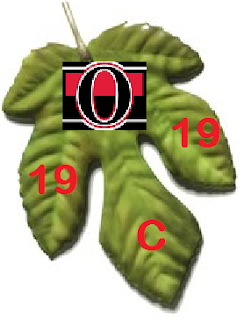 Instead of "thank you fans," Melnyk will have a sign reading "you're welcome, ladies" placed under the ice at  Canadian Tire Centre.

To shelter revenues from taxes, Melnyk will push to have the Ottawa Senators reclassified as a charity. To provide evidence in support of the team's charitable status, Melnyk will point to Erik Karlsson's many giveaways.
Posted by Unknown at 17:22