The hypocrisy of Hertl haters

In case you missed it, the San Jose Sharks' Tomas Hertl caused an uproar on Tuesday night by scoring a flashy goal. Here's the goal in dispute on social media and among hockey writers.


For some reason, people consider this awesome goal to be insulting toward the New York Rangers (the Sharks' hapless opponents that night) but also to the NHL as a whole.

Yes, Hertl's feat somehow disgraces the NHL, the same organization that has altered the rules, the dimension of nets, and the size of goalie equipment over the last few years in order to increase the number of goals scored per game. Given that directive, how could Hertl's goal cause such an uproar?

Aren't these exactly the type of plays that all-stars such as Pavel Datsyuk get praised for performing? Isn't there a statue commemorating a moment in which Mario Lemieux made two defencemen look incredibly stupid? 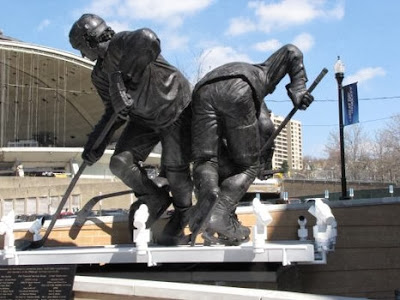 SPOILER ALERT: yes, there is such a statue of Lemieux deking around two d-men before scoring one of his most memorable goals. 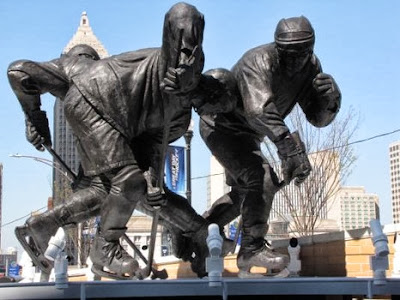 And here's how stupid those defencemen look. Whatever hockey-hating anarchist designed this statue apparently had the audacity to leave it outside of the Pittsburgh Penguins' arena. I'm sure that the NHL will send officials to remove this affront to the league ASAP. (Photo source) 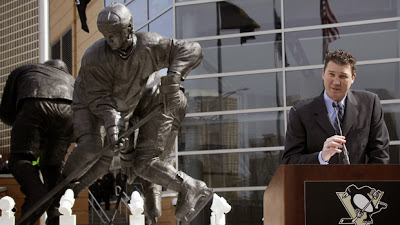 Lastly, here's Lemieux addressing the media about the statue. I'm sure he's telling reporters how shocked and hurt he was by the sculptor's flagrant abuse of his former opponents. (Source)

Kate Carrera of The Washington Post tries to explain the outrage by focusing on an objection from Washington Capitals head coach Adam Oates: "During Oates's playing days, a goal like that would have brought at least a fight or a solid slash from a goaltender, if not more."

I'm usually a proponent of fighting, but here's one case in which I find the circumstances for dropping the gloves to be baffling. A young player makes your team look stupid, so you try to start a fight with that kid or his teammates? Shouldn't the dressing room beat themselves up for letting themselves look stupid? Shouldn't the goalie slash his d-men or even himself for playing so poorly?

I'm okay with teams starting fights to save face in a losing effort. That's part of securing a moral victory in an otherwise disastrous outing. But such fights should be predicated on defending the reputation of the team, not as a punitive measure. The fight shouldn't be pursued as an act of revenge because the players have nothing to avenge. Hertl didn't do anything wrong. If the opposition has a problem with the way he scored, then they should learn to play hockey better.

Other hockey writers are debating this goal as a breach of etiquette. Damien Cox of The Toronto Star leads the charge in accusing Hertl of poor sportsmanship. 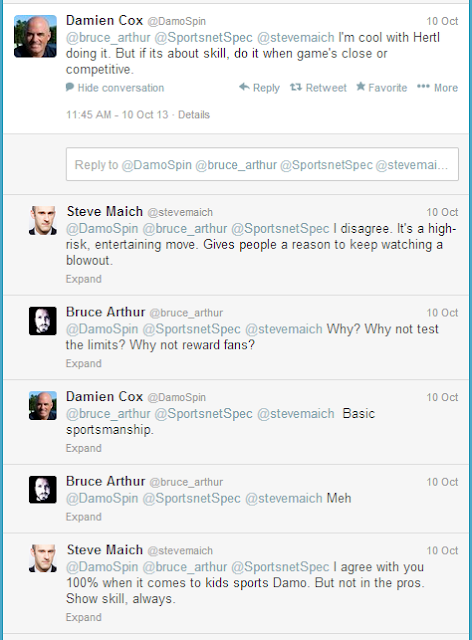 Apparently players are supposed to hold back when the game's outcome is no longer in question. Such decency is expected not only from opponents but also reporters, who eagerly seize upon any opportunity to write that a team nearly blew a multi-goal lead by failing to press their attack for a full 60 minutes.

Cox's comments also make me wonder when a game is no longer competitive. Even when a team has no chance to make comeback, aren't players still competing for the league's top honours? Hertl's fourth goal could make the difference between winning and being a runner-up for the Calder Trophy as well as other NHL accolades.

Aren't such efforts to tally as many points as possible the stuff that hockey legends are made on? Aren't these accomplishments the keys to the Hall of Fame? Every award given to scorers is predicated on other teams looking bad. How could the NHL wag a contemptuous finger at overachievers with the one hand and give out awards to top scorers with the other?

Joe Thornton understands the hypocrisy of Hertl's detractors. I'm not a San Jose Sharks supporter, but I'm a big fan of how Joe Thornton stuck up for his rookie teammate when a reporter asked Patrick Marleau if he thought that Hertl was showboating. The Neutral of fearthefin.com said it best when he praised Thorton's response as exactly "what a captain should do in coming to the defense of his teenage linemate."

I generally dislike it when players call out their critics by pointing out that most reporters haven't played the game, but that line of argument was appropriate when Thornton used it during his confrontation with the meddling reporter. In professional hockey, it's a forward's job to score goals regardless of what the scoreboard says or how an extra tally might hurt the opponents' feelings.

The "showboating" question was an inane attempt to bait an experienced NHLer into causing even more controversy for his rookie teammate. Whoever asked the question should be pleased to have received an unexpected but nevertheless headline-worthy response, which is exactly what she or he wanted.

Good on Jumbo Joe for blocking a cheap shot directed at one of his club's future stars. Now if he'd only sign this jersey to commemorate the interview. 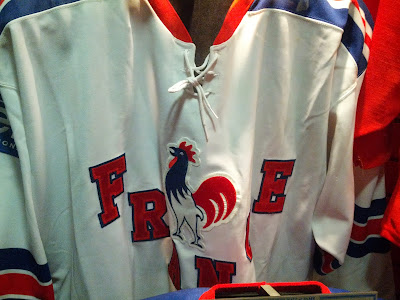