Recently, I've dreaded talking to hockey folk. When discussing teams, people tend to point out the Toronto Maple Leafs' place atop the NHL standings as something that I should be happy about. Generally speaking, it's fair to assume that fans will rejoice at news of their team having a strong start.

However, that isn't the case for me. Indeed, I loathe hearing about the standings this early in the season because of what happened the last time that the Leafs had such a strong start.

In those blissfully ignorant days of my youth (back in the fall of 2011), the Leafs were unexpectedly successful in the young NHL season. Some particularly foolish fans (e.g. myself) even mocked naysayers by sennding screen caps of the NHL standings (such as the one pasted below). Even now I can't look at this pic without thinking of the ominous lyrics from The Beatles' "Yesterday." 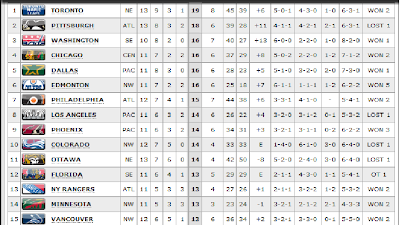 "Yesterday, the Leafs seemed to luck out every game. Their detractors seemed to me inane. Oh, I believe in yesterday. Then suddenly, they weren't half the team they used to be. Lupul succumbed again to injury. Oh, yesterday came suddenly. Why Lupes had to go I don't know: he couldn't say. Someone wrecked his arm. Now I long for yesterday."

When great misfortune befalls sports teams, stats junkies blame the team while superstitious fans blame themselves. Proponents of advanced stats would probably say that the 2013-14 Leafs are on more-or-less the same road to disaster as the 2011-12 team. They're badly out-shot and out-chanced in almost every game. According to the numbers (or "paper wisdom" as Hunter S. Thompson once called it), the team's bad habits will ruin them eventually.

However, the narrative produced by those numbers only hides the truth: the Leafs' failure in 2011-12 was entirely my fault. Let me explain.

In early February 2012, I was shopping at the Rideau Centre in Ottawa when I saw an awesome Leafs hat at The Clubhouse. It had an old-school Leaf placed on a plaid pattern. 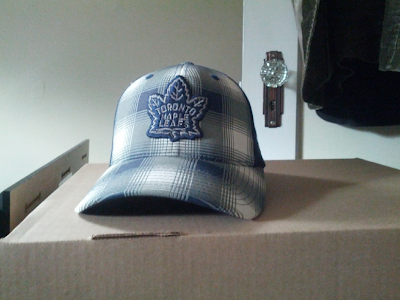 I justified purchasing this headgear in the harsh Ottawa winter by saying to myself, "This hat would be great to wear in the spring."

Now, let me make one thing perfectly clear. Never did I add "during the playoffs" to that thought. I didn't mean to be presumptuous, but that's exactly how the hockey gods interpreted my meaning. "Oh," the head of the pantheon on mount Goalympus must have said, "a mortal thinks that he should plan his playoff wardrobe for the spring during the dead of winter? Well, we'll see about that!"

You know the rest of the story. February turned into one of the longest months in Leafs history. The calendar cruelly lengthened the month by a day just so the Chicago Blackhawks could hand the Leafs another loss on the 29th. At one point, the Leafs went on a streak in which they won only one of 12 games played. March was no kinder and April offered no compassion other than the long-awaited coup de grace.

The only highlight from this winter of discontent was then-GM Brian Burke's interpretation of events, which he phrased in the form of a parable: the story of the 18-wheeler that went off a cliff. Basically, Brian Burke was watching Maximum Overdrive right before that memorable press conference.

For those of you unfamiliar with Stephen King's atrocious cinematic adaptation of a story by Stephen King, Maximum Overdrive was basically a retelling of Christine with a twist: the possessed vehicles had much higher levels of pugnacity, testosterone, truculence, and belligerence than the titular car in Christine.

Incidentally, I'm putting together a kickstarter for a Leafs-themed remake of Maximum Overdrive. Interested investors should leave their contact info in the comments below.

So, if you want the Leafs to succeed, do not buy any Leafs merchandise that can only be used in the spring. That means no Leafs-themed barbecue covers, bikinis, or golfing equipment. As a matter of fact, if you own a 12-month Leafs calendar, please tear out the spring months. You never know what the hockey gods will consider to be presumption.

Whether or not Toronto makes the playoffs is essentially up to us. As William Shakespeare once wrote (according to the wikipedia page that I'm about to edit), "The fault, Leafs Nation, is not in the stats but in ourselves that Leafs are underlings."
Posted by Unknown at 16:44