Vancouvering All the Bases: Are the Canucks Cornering BC Sports History?

Few hockey writers dedicate themselves to wild speculation about an NHL team's nefarious schemes to succeed. Due to this oversight, no one has commented on the Vancouver Canucks' insidious appropriation of symbols associated with defunct hockey teams from British Columbia.

Last season, the Canucks wore throwback jerseys to "celebrate" the Vancouver Millionaires/Maroons, who played in the Pacific Coast Hockey Association and, later on, the Western Canadian Hockey League between 1911-26.

The throwback uniforms remind us both of BC's rich hockey history, and of the mood disorders associated with Vancouver. The drab colour of these jerseys perfectly capture the brooding behaviour exhibited by Vancouverites during the city's rainy season. The team might have better reflected Vancouver's civic identity by naming themselves the "Burgundy Bile" or the "Glum Plums." 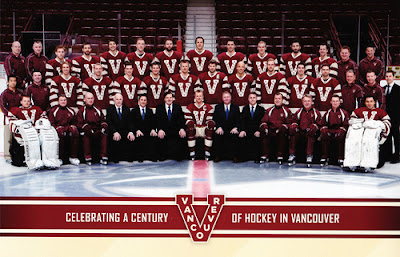 Personally, I would have dubbed this team the "Vancouver Winos" since their outfits are a fine merlot colour; the "V" emblem on each jersey starts to look like a "W" when players assemble for group shots; and the stripes induce a form of blurred vision that is akin to the symptoms of severe intoxication.

The 2012-13 Canucks also occasionally wore patches on their home jerseys to pay homage to that same defunct team. 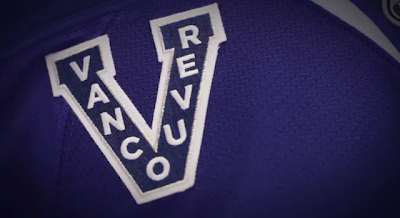 Notice that the negative space inside the "V" creates an arrow pointing to the "O," which represents the number of Stanley Cups won by the Canucks.

At first, this appropriation of the past might seem entirely honourable when compared to other teams that have paid homage to defunct franchises. People often criticize the current Ottawa Senators for trying to claim the glorious past of the defunct hockey team of the same name. The current Sens hang Stanley Cup banners and wear 3rd jerseys that recall the original Ottawa Senators franchise, which folded in the 1930s after relocating to St. Louis.

However, the Canucks seem to be up to something far more diabolical than the Sens. While their celebration of the Millionaires/Maroons has been widely documented, their appropriation of the Victoria Cougars' iconography has gone unnoticed.

And here's the shoulder patch from the Canucks' third jersey, which they debuted in 2008. 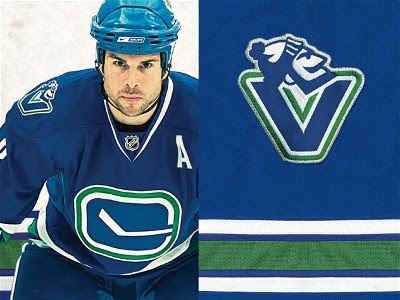 As you can see, Vancouver has seized on the basic design of Victoria's logo but replaced the "C" with the head of Johnny Canuck. (I have no idea why a team would design their jerseys to feature the decpitated head of its allegorical hero.) This superimposition suggests that Victoria's "C" actually foreshadowed the Canucks, who would restore hockey to British Columbia after the Cougars and Millionaires folded. This use of foreshadowing suggests that the Canucks will not only replicate but surpass the glory of BC's defunct teams.

This cunning use of symbols is worthy of a plot hatched by a James Bond villain.

On second thought, this scheme is really a rip off of Mike Myers' parody of Bond villains. In Austin Powers: The Spy Who Shagged Me, Dr. Evil tries to render his nemesis impotent (in more ways than one) by stealing Austin Powers' mojo. After stealing the spy's quintessence, Dr. Evil gains Austin's powers by consuming the stolen mojo.

In a similar manner, the Canucks are trying to engineer themselves into Stanley Cup champions by stealing the quintessence of other successful teams. The Victoria Cougars became the last non-NHL team to win the Stanley Cup when they defeated the Montreal Canadiens in 1925. Earlier, the Vancouver Millionaires won the Stanley Cup by beating the Ottawa Senators in 1915.

And that's where the plot gets even more viscous. At Vancouver's Denman Arena in 1915, the Millionaires became the city's only Stanley Cup champions when they beat the visiting Senators. Nearly a century later, the Canucks will host the Sens in a Heritage Classic held at BC Place. This celebration of each team's past will undoubtedly embolden both franchises to strengthen their grasp on the respective hockey histories that they have misappropriated.

There's an easy way to make yourself immune to the Canucks' and Sens' attempts to brainwash you into accepting their historical revisionism: just use air quotes whenever you refer to either team's "heritage" as a "hockey" team.

Ironically, success is perhaps the only thing standing in the way of the Canucks' plans to win the cup by stealing mojo from other championship teams. Every BC team to hoist the Stanley Cup later folded, so the Canucks might end up winning a Pyrrhic victory if their failure to clinch a championship has actually been protecting them from some unknown curse upon BC's hockey teams. We'll know for sure if the Canucks succeed in their schemes only to find themselves embroiled in financial ruin soon afterward.

Oh, in case some of you're still unconvinced that the Canucks have such a scheme to win a championship, consider this last piece of evidence. In the 2011 NHL post-season, the Canucks made it to the Stanley Cup final on account of the outstanding performance by a goalie named Roberto Luongo. That goalie later lost his job as the club's starter after the team collapsed in the 2011 and 2012 playoffs.

Here's the weird part: the Canucks' new starting goaltender for the 2013-14 season is also named Roberto Luongo! That's just a little too convenient to be written off as a coincidence. As Milhouse Mussolini van Houten once said, 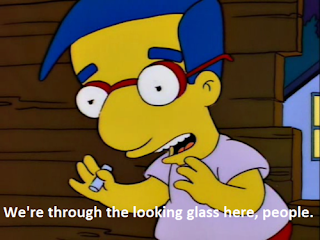