U Mad, Brony? Why Ray Ferraro blocked me on Twitter

It's absurdly easy to get blocked in Twitter these days. Take, for example, last night when I was blocked by Ray Ferraro after a two-tweet exchange during a preseason game between the Toronto Maple Leafs and Ottawa Senators.

After goalie Drew MacIntyre took over the crease from Jonathan Bernier, Ferraro (acting as the commentator between the benches for TSN) seized upon this opportunity to report on MacIntyre's mask. He said that the mask (pictured below) featured 3 Care Bears. 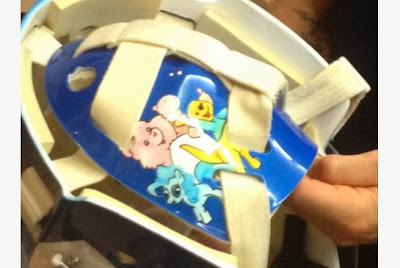 Don't let the harmless appearance of these cuddly critters fool you: they've dealt a mortal wound to the Leafs' reputation as a truculent, pugnacious team.

I can see how these groups of characters can get confused. Both have a penchant for rainbows, and both have symbols on their bodies. (Apparently these are called "cutey marks" on My Little Pony and "belly badges" on Care Bears.)

However, there is one palpable difference between these groups--one is ursine and the other is equine. In layman's terms, one's a damn bear, and the other's a frigging pony! (The third figure on the mask, of course, is a Kangaroo.)

I don't expect hockey commentators to know such nuances surrounding relics of 80s nostalgia, but I do expect them to have a sense of humour when they refer to a pony as a bear. With that expectation in mind, I tweeted the following:

Maybe Ferraro misunderstood my avatar (of Jonathan Toews dressed as Titus Andronicus from Julie Taymor's Titus) as a declaration of war. Maybe the name I was using ("Bobo") caused some of Ferraro's repressed hostility toward the real Bobo (Bob McKenzie) to bubble up to the surface. Whatever the cause, Ferraro fired back with the following reply.

Seriously, how did things get out of hand in such a short period of time? Perhaps Ferraro was already receiving a lot of flack over this pop-culture mess up from others on twitter as well as his colleagues at TSN. My lighthearted correction, then, may have become the straw that broke Ferraro's camel.

Temporary insanity is perhaps the only way to account for Ferraro's strange response. I know there's a Care Bear on MacIntyre's mask, and I appreciate that the goalie had it included as a shout-out to his wife. That doesn't change the fact that Ferraro failed to recognize the differences among ponies, kangaroos, and bears.

It's not like Ferraro's journalistic integrity hinges upon his ability to discern bears and ponies, so why did he take such offence to my tweet? What made my tweet so offensive that Ferraro had to drop whatever he was doing between the benches in order to block me on the spot? While I appreciate being given notoriety, I'd rather become infamous for saying something that actually mattered.

Given how upsetting my tweet was, I'm impressed that Ray managed to remain composed for the rest of the game knowing that people with a superior knowledge of bears and ponies were ready to pounce on his every mistake.

However, there was one noticeable slip up. Perhaps I merely imagined, but toward the end of the game,  it kinda sounded like Ray said "Mason Roo-mond" instead of "Raymond" when announcing TSN's "electric player of the game." Was Ray distracted by the Winnie the Pooh fans trolling him vengefully on behalf of Kanga and Roo? 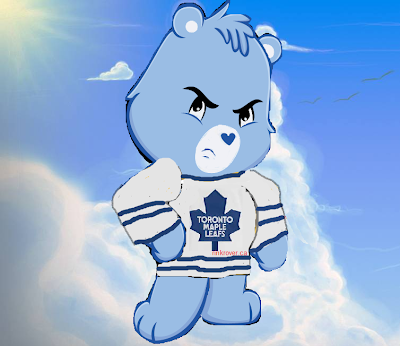 We may never know why Care Bears are such a sensitive issue with Ray Ferraro. Maybe young Ray once desperately wanted a Care Bear, but his mother could only afford a My Little Pony, so she bought him the pony and convinced him that it was a bear. Maybe last night was the first time in Ray's life that he understood why the other kids made fun of him as he fruitlessly struggled to force a horse into a cloud car.

If that's the case, then I'd like to make a peace offering. Ray Ferraro, this Care Bear's for you! 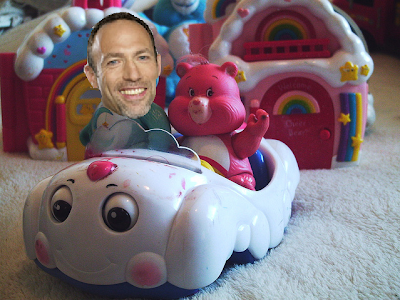 United at last, Ray Ferraro and Cheer Bear drove off into the sunset together.