If, like me, you're a Toronto Maple Leafs fan living outside of Ontario, you probably had to subsist on highlights and post-game interviews while more fortunate fans watched the Leafs rookie tournament live.

I can't offer an in-depth analysis of the tournament. Instead, I've prepared some general comments on the event as a whole (especially on comments made during post-game interviews).

1. Two Ruperts Are Better than One!

If the Leafs can sign Matt Rupert, I'd be ecstatic. Matt has been passed over in the last two drafts. I'm not sure if he can sign now as a UFA. If not, I wouldn't the marginal loss if Toronto decided to use a mid-round pick (3rd-round and up) on him next year.

As I wrote earlier, Brian Burke praised the Ruperts' brand of hockey for its surliness. I only hope that Matt makes his game more edgy than surly so that the Leafs can debut them as members of the "7 Duffs."

Feel free to suggest which players should fill in as the other Duffs. It's too bad that the Leafs didn't draft Tyler Seguin: he'd be a shoe-in for Dizzy and/or Remorseful.

Matt and his twin brother Ryan (already a Leaf prospect) are the closest thing this team will come to signing the Hanson brothers from Slapshot. Although undersized as NHL forwards (hockeydb.com might be a bit too generous in saying that they are 5'10" tall), the brothers deliver infuriating blows with and without their gloves on, and they often add insult to injury by scoring afterward.

Tie Domi attended Budweiser Gardens regularly to watch his son play with the London Knights, but (and I'm not trying to knock Max here) he probably saw more of himself in the Ruperts.

Added bonus: If the Ruperts manage to get into the NHL while the Sedins still play, Leafs-Canucks games would be an exciting match up between two very different sets of twins. Proposed title for these games: "Finesse under Duress."

I feel bad for Antoine Bibeau. Judging by the box score last night, he was ridiculously outmatched by the Baby Sens. It almost seems cruel to send a guy who still has that new-draft smell against a group of Sens prospects that had quite a bit of AHL seasoning with a dash of NHL experience.

Mark Stone, who has had a smattering of NHL and WJC experience to go along with his excellent AHL debut last season with the Binghamton Sentaors, lit up Babeau last night like a Christmas tree. Bibeau played Santa Claus in this game by gifting rebounds to opponents such as Shane Prince. Combined Stone and Prince scored 1/3 of Ottawa's goals in the 6-2 beatdown.

I'm not too surprised by this result as it's no secret that the Sens currently have a very strong prospect pool. Still, it seems like a form of cruel and unusual entertainment to thrust Bibeau into the lineup against a dominant prospect team.

Of course, Bibeau needs to learn that the road to the NHL is paved with players who have been crushed by the pressures of professional hockey. There's no sense sheltering him from that reality, which is probably best for him to face in a tournament with an outcome that is mainly of symbolic importance.

I wasn't a huge fan of Steve Spott during the 2012 Subway Super Series and the 2013 WJC. During that tournament, he seemed rather complacent with team performances, and he often looked directly into the camera during interviews. 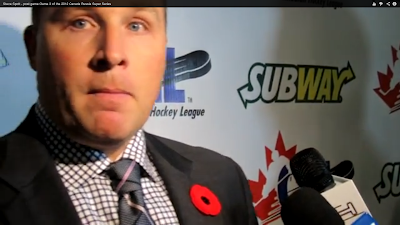 "Stop trying to peer into my living room! Seriously Steve, it's creepy."

Well, my opinion of Spott skyrocketed after the game against the Pittsburgh Penguins' prospects on Saturday. Noting that the Leafs were outshot 7-0 early in the match, Spott credited Jamie Devane's fight with Liam O'Brien as a turning point that gave the Leafs momentum.

So fighting turned the tide against a team that (at least at the pro level) is synonymous with finesse instead of physicality. Twitter must have exploded immediately after Spott made these unequivocal remarks, which he spoke deliberately and directly into the camera. I only wish that he'd followed up these comments by dropping the mic, sauntering away from the scrum, and giving Randy Carlyle a Fresh Prince of Bel-Air handshake.

"Put this in your excel spreadsheet and formulate it, advanced-stats partisans!"

To summarize--the Leafs firmly believe that fighting is an essential part of hockey that contributes directly (albeit often imperceptibly) to the outcome of a game.

The Leafs dominated in the least likely part of the game during the rookie tournament. Well, maybe "dominated" is too strong of a word, but they won two games in the shootout. And, as far as I could tell, Tyler Bozak wasn't inserted into the lineup for the second frame of OT play.

We shouldn't take these wins as signs that Leaf prospects have some extraordinary shooutout skill. Perhaps their success represents the hockey gods making up for the Leafs' SO futility in the 2012-13 season. Perhaps these wins foreshadow greater SO success in the 2013-14 campaign. Even if all of these interpretations are wrong, it was a pleasant surprise to receive news of the Leafs going to the shootout without dreading the inevitable loss-due-to-lack-of-scoring.

Spott's valorization of fighting was a highlight from the post-game pressers, but the most entertaining interview took place following the Leafs' SO win over the Chicago Blackhawks.

As you can see, the interview with Frederik Gauthier is somewhat upstaged by Tyler Biggs, who is giving us his best "how you doin'?" look. 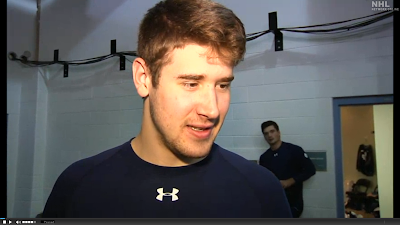 I assume that Biggs was trying to channel Ryan Gosling, so let's give him the meme treatment. 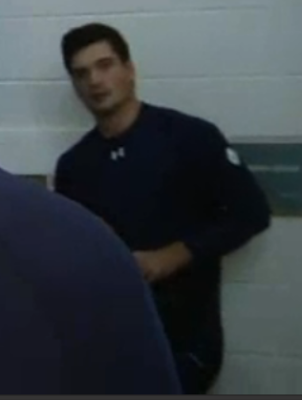 "Hey girl, I might be a tough guy on the outside, but I have a Biggs heart."

"When I'm thinking of you, two minutes in the penalty box is like seven minutes in heaven."

"Hey girl, I fought a guy just to frog his jersey for you."

"Hey girl, I don't think the "no-touch icing" rule should apply to your habitual snacking on cake frosting."

"Don't eject me from the game for being the third-man-in the fight for your heart."

"Hey girl, I'd give you more than two minutes for holding."
Posted by Unknown at 17:01