The Cain Mutiny: An Attack on Hockey Clichés

If anything could be considered inevitable in sports, it would be that sportswriters are wired to make a biblical joke whenever something happens to a player named Cain or Kane. In terms of Kanes Patrick and Evander of the Chicago Blackhawks and Winnipeg Jets respectively, we often hear support for each player phrased with the formula "Kane was always able" or "Kane is very able." Get it? It's a pun on "able" as in competent and "Abel" as in the guy murdered by his brother in the Book of Genesis.

This oft-repeated joke makes no sense. The jokers strain the source material to make a lousy pun. Kane was always able? So, the brothers were the same person all along? According to that logic, the first murder was an inside job (suicide).

The only way to make sense of this joke would be to note that Cain received some (perhaps undeserved) criticism on his religious game. Both Cain and Abel made offerings to God: Abel's was accepted, but Cain's was rejected for unknown reasons. Do hockey writers mean to say that criticisms of Kane are unjust rejections of what he has offered us? Such a conclusion elevates journalists to the status of gods who weigh in on the worthiness of players. It hardly seems likely that any sportswriter intended this sort of theological controversy with a pun that he or she made flippantly.

No, the simple conclusion is often the best. In this case, it seems to be that puns are fun, so we should make them all of the time.

The Cain-Able pun, however, is particularly annoying because it seems to have a perpetual newness to it. People treat each reiteration of it like a bold new witticism. Last season, I heard the joke made on two separate occasions when the hosts of TSN's "Sportscentre" dissected the play of Kanes Patrick and Evander. Both jokers wore smug expressions of self-satisfaction. Each seemed to believe that he was the first person to use Sunday-School education in such an outrageous way. Perhaps they thought we at home would react as follows: "OH SNAP!!! Did he just make fun of the first murder in biblical history?"

Neither host, of course, was charting new territory in the world of sports humour. Each was stumbling down one of the most over-trodden paths in the field of puns by mercilessly beating a zombified horse.

If we accept South Park's theory that cultural traumas become fair game for risque humour after 22.3 years, then it's reasonable to conclude that stories from Genesis entered the "comic domain" a long time ago. Since the story of Cain and Abel took place shortly after Eve snacked on the forbidden fruit, punning on it has been kosher for millennia. I Mel Brooks' ancestors made quips about Cain and Abel between lashings as they helped build the pyramids.

Of course, the main problem with this joke isn't the fact that it's old but that it doesn't make sense. I've already discussed the "Kane was always able" iteration of the pun, so let's focus on the one included in the tweet posted above. Cain was cut because he wasn't able? No, Cain isn't Abel in this case because he was cut from a team instead of being bludgeoned to death by his brother (Cody). It's not like Cain was a draft bust while Abel went on to have a Hall-of-Fame career as a shepherd. 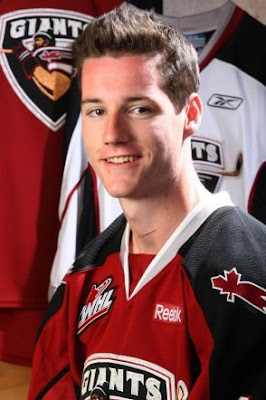 These comparisons are particularly meaningless since Cain Franson has a famous brother (Cody) who is neither a shepherd nor victim of fratricide.

Maybe I'm being a bit nitpicky about the differences between not making a team and being murdered. My point is that these puns on Cain/Kane don't contribute anything to our understanding of events in sports. We use figures of speech to help us grasp actions in games. For example, we often hear a slapshot described metaphorically as a howitzer in order to express the strength and suddenness of the shot.

Our knowledge of the Cain-and-Abel story doesn't enhance our understanding of Cain Franson's misfortune. There's a word for excessively-used phrases that have little meaning: cliché.

Of course, making these points won't stop these puns from being made. Instead of merely complaining, I'll try to improve hockey discourse by suggesting ways to nuance these jokes.

1. In terms of Cain Franson's release from training camp, we could play on the fact that Cain was exiled. Example: "The Vancouver Canucks have decided to assign Cain to the Nod Wanderers of the AHL."

2. We could pun on Cain's physical punishment. Example: I'm surprised that Cain Franson was cut: he received high marks for his truculence." (Get it? Mark of Cain!)

3. We could make fun of the fact that some cultures depicted the "Mark of Cain" as a horn or a set of antlers. Example: If Cain Franson isn't careful when wandering through the outskirts of Vancouver, he might end up in David Booth's trophy case! (NOTE: David Booth likes to kill things.)

4. If Cain Franson was released because he refused to buy into John Tortorella's emphasis on blocking shots, we could pun on Cain's altercation with God. Example: When Tortorella asked why Franson didn't throw himself in the way of a shooting lane, Cain replied: "Am I Luongo's keeper?"

5. Perhaps it's time to put the Cain-and-Abel story to rest. There are many other ways to pun on the name Cain. We could compare players named Cain or Kane to characters played by Michael Caine. We could dust off some old Herman Cain jokes from the 2012 US Presidential Election. We could even put aside clever comparisons and just have Kanes Evander and Patrick dress as candy canes to promote hockey during the holiday season. 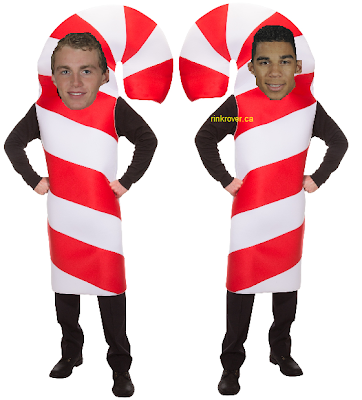 THIS NEEDS TO HAPPEN!