Randy Carlyle did it again! Leafs Nation erupted in a whiny volcano of molten negativity today when the head coach of the Toronto Maple Leafs announced that he intended to try noted pugilist Frazer McLaren on the team's penalty kill.

Much like when Carlyle chooses to tie his left shoe before the right, this decision created a surge in the number of tweets that denounced Carlyle as a moron and lamented that Dallas Eakins hadn't been hired to helm the Leafs. (Side note: at any given moment of the day, someone is calling for Carlyle to be fired. The sun never sets on bitter Leafs fans.) 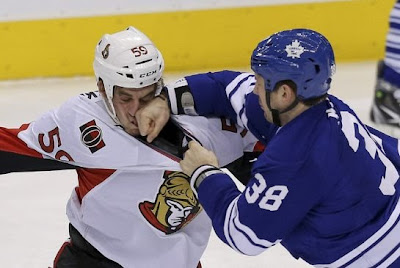 Could Frazer McLaren knock out penalties like he has so many opposing players?

I have no idea if Frazer McLaren has any ability to kill penalties. I also wonder if those who seem convinced that he would be a disaster on the PK have any evidence to support their tirades against Carlyle and one of his prized fighters.

This type of response is essentially prejudicial. A significant portion of Leafs fans have long  decried the team's emphasis on toughness and other intangibles. The problem is that their disdain for these aspects of the game appear to be informing their negative opinions of Carlyle's actions. 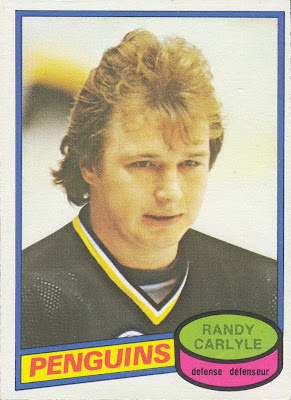 I'm not saying that Carlyle is incapable of making mistakes. Take, for example, this hair.

Here's how I imagine a dialogue between Carlyle and fans who dislike enforcers would go.


Randy Carlyle: I'm glad that we re-signed both Colton Orr and Frazer McLaren this summer because they contribute to our team's overall toughness.

Fan: That's stupid. Face-punches like Colton Orr and Frazer McLaren have no place in the NHL. I wouldn't mind them as much if they could actually play hockey, but they don't belong on an NHL team because they're one-dimensional players.

Randy Carlyle: Well, we're going to try McLaren on the PK during camp and pre-season games.

Fan: That's stupid. Why would you put a one-dimensional player on the PK?

Randy Carlyle: To see if he has another dimension to his game.

Fan: That's stupid: he only has one dimension to his game. If you don't see that, then you're stupid."

Basically, fans are using their perceptions of McLaren (without any evidence of his potential as a penalty killer) to pigeonhole him into being a one-dimensional face puncher. To them, it's apparently an affront to offer an enforcer the chance to contribute something other than a handful of minutes on the ice and dozens more in the penalty box. The real problem here seems to be an unwillingness to give McLaren a chance. 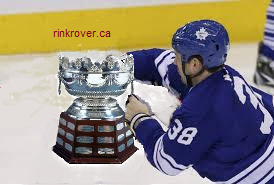 Granted, in all likelihood, McLaren won't come anywhere near the Selke Trophy unless he's giving it some left hooks in order to teach it a lesson for taking liberties with the Leafs' star players.

Sure, McLaren might be a terrible penalty killer. But shouldn't we give him the opportunity to be terrible before writing him off as such? With his frame, he might be able to succeed in shorthanded situations simply by lying down on the ice and blocking 2.5 shooting lanes with his sheer size!

I'll update this post if anyone comes up with evidence that McLaren shouldn't come anywhere near the ice--that he shouldn't even look at a snow cone--when his team is killing a penalty.

However, even with those arguments in mind, it's still worth noting that there's little to lose by trying McLaren on the penalty kill in camp and during the pre-season. At best, the Leafs may find that there's another dimension to McLaren's game. At worst, they give up a bunch of power-play goals in games that don't really matter. It's a win/insignificantly-lose situation that the Leafs should exploit by experimenting with their lineup and testing their personnel.

In the meantime, I hope that Carlyle's detractors ask themselves the following question honestly: should we fault Carlyle for putting a guy in a position that he might not be cut out to play, or for refusing to give his enforcers a chance to prove that they can offer more to the team?
Posted by Unknown at 15:50