If you haven't heard anyone complain about the new third jersey released by the Buffalo Sabres today, that's probably due to the fact that most people who have seen it were immediately turned to stone. Seriously, even Medusa thinks that these jerseys are grotesquely nauseous. 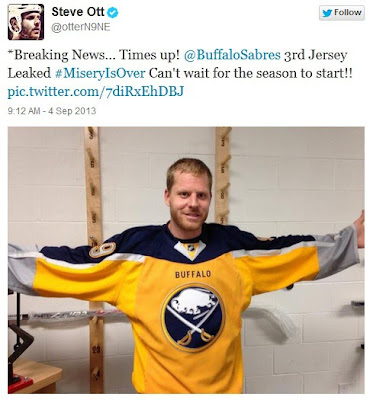 If hugs could kill, this one would be registered as a lethal weapon. 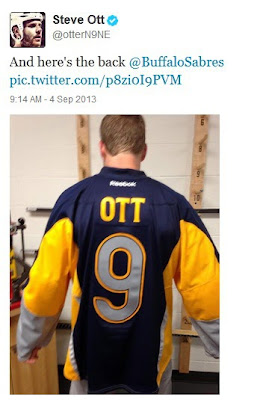 Saddened that no one will hug him, Ott weeps alone in a corner.

Unless there's something wrong with the lighting, it appears that the designer intended to have two different tones of hideous yellow. If Mountain Dew ever went rabid, it would probably look like this shade of radioactive urine.

By having a strip of the one yellow flanked by the other, it looks like players are wearing a bib or an apron. Maybe the design is supposed to show that Buffalo's wingers are cooking up some spicy offense, but it'd be just as easy to interpret these jerseys as Buffalo's admission that the team is a bunch of cry babies.

It's baffling that the designer incorporated so much hideous yellow. It's used in the lettering, as a border around the numbers, and along the underside of the arms. There's even a little glob of it around the NHL's logo on the collar. Combined with the grey trim, it looks like the designer wanted the jersey to look like a florescent ascot.

The most unsightly aspect of the jersey has to be the yellow trim on the underside of each arm. Spectators at First Niagara Centre are going to have their digestive systems thrown abruptly in reverse when they see players racing down the ice in these jerseys with their arms extended. I predict that fans will begin to nickname the club the "flying phlegm wads" because of these outfits.

The worst part of these hideous jerseys is probably the fact that they're not even original. It's understandable that some attempts to differentiate a franchise from others will result in outfits that scald the eyes and raise doubts about the existence of a benevolent God. 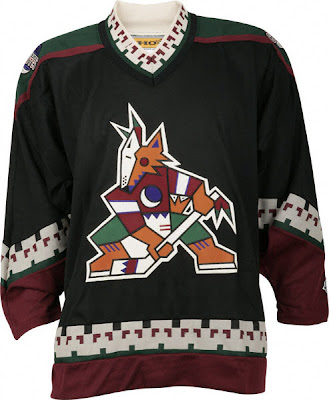 Atheism hit an all-time high in Arizona after the Phoenix Coyotes debuted these duds.

Buffalo, however, pretty much ripped off the Nashville Predators style and yet somehow found a way to enhance the Predators' ugliness. 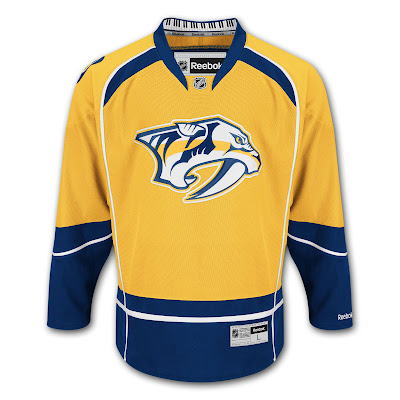 Come on, Buffalo! You're a much older and, presumably, more viable hockey market than your colleague in Tennessee. Why would you open yourself up to being called "Nashville North" by issuing a jersey that has all the genetic defects of an over-bred species? Buffalo's new jersey shows more signs of inbreeding than the setting of Deliverance.

Maybe they ripped off the Predators because they felt that Nashville's "sabre-toothed cat" logo infringed on Buffalo's rights to all things "sabre." Even so, imitation is a poor form of revenge.

I assume that someone in the Sabres organization noticed that their jerseys look like knockoffs. Maybe Perhaps that's why Buffalo's monstrosity has the word "BUFFALO" appear as though stenciled in just above the logo. This way, casual fans will be able to tell Nashville and Buffalo apart.

Of course, the easiest way to tell these two apart would be to look at the cuffs. Nashville's are a dark blue whereas Buffalo's are a light grey for some reason. Was light grey was on sale at Costco? I can't think of any other justification for slapping another colour on the cuffs. Sure, this grey also appears in the number on the back of the jersey, but that could just as easily (and perhaps more logically) have been a third shade of noxious yellow.

I assume that the cuffs were included to make the team look like a bunch of Civil-War era gentleman officers. The outfit is kind of reminiscent of this get up worn by a captain in the Confederate army. 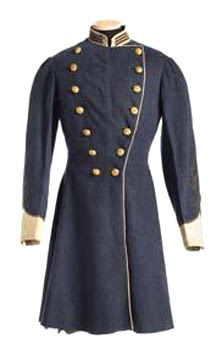 I'm probably giving the team waaaay too much credit. However, if they were trying to appeal to nostalgia for agrarian America, they might have gone with something more like this. 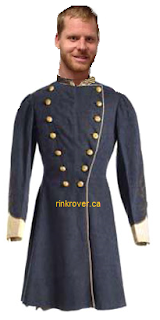 "I have to take a faceoff against Claude Giroux? Fuh-fuh-fuh fortunately I keep my faceoff numbers from nhl.com memorized in cause of just such an emergency."
Posted by Unknown at 15:25