Just when the preseason was getting stale, the Toronto Maple Leafs and Buffalo Sabres spiced things up with a brawl that quickly devolved into algebra as officials tallied the exact number of penalties incurred during a melee reminiscent of the opening scene from Gladiator.

To no one's surprise, the anti-fighting contingent of hockey writers denounced last night's game as a fiasco, gong show, disgrace to the game, or the hockey equivalent of The Godfather III. (Okay, I made up that last one, but it would be nice to see these writers nuance their diatribes now and then.) 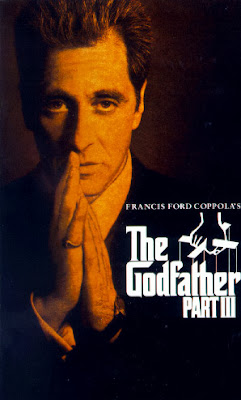 Perhaps these writers felt compelled to condemn last night's brawl because it may have a tangible result and make a significant contribution to the game. The fights might convince pending UFA Phil Kessel to re-sign with the Leafs.

As a few people noted following the game, Kessel has been surprisingly truculent lately. (Well, as truculent as #81 can be.) Kessel has been dishing out hacks and slashes more often than goals thus far in the preseason. Some consider this behaviour to be characteristic of a player in his contract year, but last night's incident wasn't about Kessel proving that he deserves a big pay day. The two goals that he tallied earlier contributed to that end.

No,  last night was more about the team courting Kessel to stay with them. The line brawl was tantamount to teammates negotiating with Kessel on Dave Nonis' behalf.

As Carter Ashton put it following the game, "we got twenty guys that are gonna back Phil up." The Leafs sent a strong message to the Sabres yesterday, but they sent also sent an even stronger message to Kessel. With the Leafs, Kessel has a team that will protect him from the John Scotts of the league. Can Phil count on that kind of support elsewhere? Kessel would be wise to stick with teammates who are willing to get their noses bloodied and broken for him.

Here are some other thoughts following the game.

I'm impressed with Carter Ashton's performance in the preseason. In the last two games, he's battled hard during every shift, fought at least one Sabre in both halves of the home-and-home series, and tallied some assists along the way.

I'm kicking myself for not listing him on my list of Leafs Prospects Guaranteed to Infuriate the Opposition. It was such an obvious omission that it prompted the following discussion on twitter: 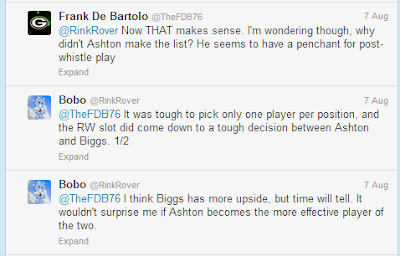 Well, time has told me that Frank was right. As of today, Ashton certainly is more infuriating to play against than Tyler Biggs.

A number of writers of seized upon yesterday's brawl to decry "the code" (an informal agreement among players as to how enforcers should function in hockey) as a "myth,"  "lie," or "worthless idea." Here's one such example. (And here's another.)

Bruce Arthur's article in The National Post exemplifies the inanity of these arguments. He writes, "the code is a worthless idea whose actual value to the game...doesn't strictly exist." Does anything strictly exist? Isn't existence a loosely-understood phenomenon based on the personal or shared perceptions of a person or thing and documentary evidence that supports an understanding of its realness? Arthur's dubious attempt to condemn fighting succeeds only as a way to infuse hockey discussions with unwanted existential angst.

These dubious, naive, and sometimes hysterical overreactions belabour a rather obvious point. Of course "the code" is flawed and can be broken. It's devised and followed by people, who are similarly flawed and breakable. 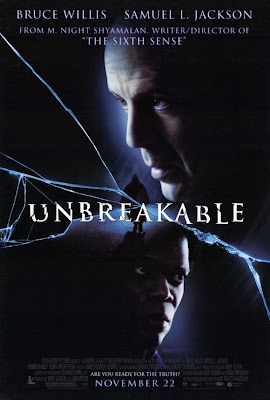 Bruce Willis, however, is an exception to that rule.

"The code" can't ensure a player's safety, but it can prepare people for what they can reasonably expect in a hockey game. In that sense, it's similar to criminal law. Enforcers aren't supposed to go after the Phil Kessels of the league just as people aren't supposed to rob others. That doesn't mean that such incidents don't happen: it simply means that they are exceptional cases that merit punishment. We can't denounce the entire justice system because it fails to prevent crime from ever happening, and we shouldn't dismiss "the code" because players such as John Scott flout it.

Carter Ashton explained that the Leafs "didn't expect" Scott to target Kessel in retaliation for Jamie Devane KOing the Sabres' Corey Tropp; such a response was "drastic".

Scott's breach of etiquette, however, didn't leave Kessel defenceless: it simply required extraordinary measures to protect #81 (i.e. David Clarkson leaving the bench to restrain the rabid Scott). Scott will undoubtedly be chastised for his actions by enforcers because he's proven himself to be untrustworthy. Likewise, officials will scrutinize Scott's every move from here on out since he can't be relied upon to respect hockey's honour codes.

These measures will either force Scott to clean up his game or make it impossible for him to play even the meager number of minutes expected of a 4th liner. Thus the system will work itself out.

3. Sympathy for the (former) Devil

I understand that David Clarkson will most likely be suspended for 10 games because he left the bench for the sole purpose of joining a fight. I don't disagree with the enforcement of an established rule, but I do object to the purpose of the rule and its uncompromising nature. Frankly, if I had the power, I'd have this measure to prevent bench-clearing brawls struck from the NHL rule book.

After all, even baseball has bench-clearing brawls. Do we really want to let baseball players seem tougher than hockey players?

Even if we accept that this rule is legit, shouldn't some lenience be shown to players such as Clarkson given the circumstances surrounding their infractions? I normally follow the rules at sporting events, but even I would have tried to scale the glass last night to save Kessel from certain death at the hands of John "descendant of the biblical Goliath" Scott.

Okay, Phil's life might not have been in danger, but his career could easily have been jeopardized had no one intervened: the league should be happy that Clarkson's intervention prevented the league to take extraordinary measures (like S.H.I.E.L.D. in The Avengers) and scramble a fighter jet in order to pacify the hulking Sabre.

Here's what would have happened if Clarkson hadn't saved Kessel.

In the slew of posts calling Randy Carlyle an idiot today (e.g. this one from Pension Plan Puppets), none of the head coach's detractors seem to appreciate his unexpected candor during last night's post-game presser.

Carlyle explained that he put Kessel's line on the ice following Devane's fight with Tropp in order to calm things down. Carlyle's reasoning was that he could defuse the situation by putting a scoring line on the ice to show the Sabres that there was no threat of a subsequent fight ensuing. Given Scott's unexpected attempt to jump Kessel, Carlyle confessed, "Obviously, I was wrong."

Such accountability is refreshing in a league full of coaches and players who prefer to point fingers elsewhere and deny any culpability for their mistakes or wrongdoings. Even if you don't like Carlyle, you should at least respect him for admitting that he was wrong to put Kessel in that situation. 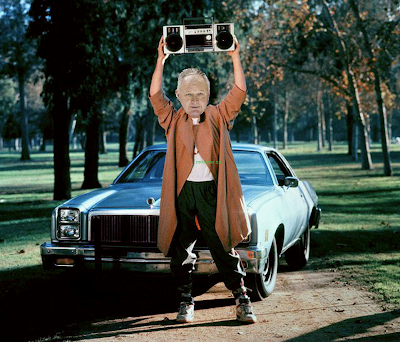 Of course, Carlyle will have to do more than admit he was wrong in order to win back Kessel's trust.

With this section, I'm turning things over to whomever is reading this post. Were any records set last night? Has a goalie ever notched an assist and a fight in the same game? How close was Bernier to becoming the first goalie in NHL history to notch a "Gordie Howe hat trick"?

Here's another highlight that might be a record-seter: all three players credited with a goal (Phil Kessel's second-period goal, assisted by Ashton and Bernier) would later be ejected from the game for participating in the same fight. How often has that happened?
Posted by Unknown at 16:31