UPDATE August 23: Mikhail Grabovski's signing with the Washington Capitals has forced me to edit this post.

Each new NHL season offers teams a chance to settle scores with various opponents, and the Toronto Maple Leafs certainly aren't short on uneven scores that they should try to balance this year. Doing so will help to shore up their identity as a tough, playoff-calibre team that doesn't shy away from grueling battles on the ice and in the standings.

Some unsettled scores are rather obvious. The "Battle of Ontario" will rage once again this year; any match up with the Boston Bruins will be seen as a chance to pay them back for ending the Leafs' playoff hopes in 2013; and every game between the Leafs and an Original 6 rival will have a long backstory that gives the match gravity.

In terms of personal vendettas, sore feelings between current and former Leafs will ramp up the intensity of certain games. For instance, when the Leafs first play the Ottawa Senators, they will need to prove that they were right in letting Clarke MacArthur leave for Kanata as a free agent.

The Leafs will also need to prove that the Carolinian Komisarek is the same defensive liability as the Torontonian version. If the Leafs fail to capitalize on their unwanted defenceman's shortcomings when playing against the Hurricanes, they will fuel speculation that Mike Komisarek's difficulties since being an all-star player with the Montreal Canadiens were due to deficiencies in the Leafs' defensive systems rather than his own shortcomings.

One personal contest that remains unclear involves the Leafs and non-compliance buyout Mikhail Grabovski. It's becoming increasingly likely that the Leafs will have to show up the disgruntled centreman not by beating his new NHL team but The biggest personal score to settle is between Randy Carlyle and disgruntled centre Mikhail Grabovski. After Grabo's expletive-laden rant following his buyout, simply beating Grabo and the Washington Capitals next season won't be enough to satisfy Carlyle. No, the supposedly stupid head coach will problem only feel vindicated when Tim Leiweke alters his Stanley Cup parade route so that the team can repeatedly pass by Grabo's Belorussian home. 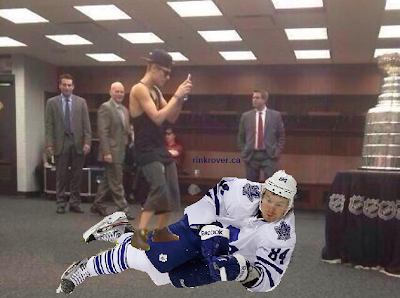 Or they could just have Justin Bieber take a picture of the Stanley Cup while standing on Grabo.

These are all uneven scores that come immediately to mind, so I've prepared a list of some of the less obvious ones that need to be settled starting in the 2013-14 season.

In case you just tuned in, the Leafs haven't been a great team for a while. Some say that they still aren't, but I think that we've seen substantial improvement over the last few years. Still, those years of futility have left the Leafs with an unenviable record against a number of NHL clubs.

Here are a few clubs that the Leafs haven't beaten in a long time. In the team's defence, all of these opponents are from the Western Conference, so they don't play Toronto very often. However, the Leafs nonetheless need to beat them to prove that they are playoff contenders.

These losing streaks are listed in order from shameful, disgraceful, and horrendous.

1A. Toronto's offence dries up in the desert

While the Phoenix Coyotes have suffered through uncertain ownership since Jerry Moyes declared them to be bankrupt 2009, but the former Winnipeg Jets have had no problems owning the Leafs over the last decade.

That's right: the Leafs haven't beaten the Coyotes once since their last win on October 23 2003. They won't have a chance to beat the 'Yotes until December 19 2013, so there's no chance of preventing these years of futility from hitting the decade mark. During that time, the Leafs have compiled a record of 0-5-1 against Phoenix. This is the best record among the three teams that the Leafs haven't beaten since 2003.

Of course, we need to add a caveat to that poor record. They Leafs haven't beaten the Coyotes in 10 years, but they've only had a chance to do so in 7 NHL seasons because the 2004-05 was cancelled and the 2012-13 season was restricted to intra-conference play due to lockouts.

Still, the Leafs need to find a way to shutdown Phoenix's forward and break through their defence in order to win. Phoenix has outscored Toronto 29-13 from 2005-2012. That means the Leafs have mustered an average of just over two goals per game whereas the Coyotes have averaged nearly five per game over these years.

This season, the Leafs should send a clear message to Phoenix's roster: "George Gosbee may own your franchise, but we're taking ownership of your net!".

After playing 639 games against the Chicago Blackhawks, the Toronto Maple Leafs hold a comfortable all-time record of 284 wins, 258 losses, 96 ties, and one OT loss.

That all-time record, however, has been slowly eroding over the last decade. If the Leafs don't find a way to beat the Blackhawks, they'll likely squander their historical superiority.

The Blackhawks last lost to the Leafs on February 12 2003. Since that win, Toronto has put up a record of 0-6-1 against Chicago. They've been outscored 31-19 in that time.

At face value, this is by far the least worrying of the three uneven scores between franchises. However, the narrative behind this match up makes the Leafs' struggles against the Blackhawks much worse. People will likely forget Toronto's inability to beat Phoenix because that match up isn't going to be considered a marquee event in the 2013-14 season. In contrast, every match up between Original 6 teams shines a bright light on any warts that have developed on a historic franchise's record.

The magnitude of the Leafs' history with the Blackhawks will make this stretch of futility seem much worse than it is. Conversely, the Leafs will receive many more commendations if they end this losing streak in the upcoming season because the game will receive much more coverage. Added to that narrative is the fact that the Blackhawks won the Stanley Cup last year.

The Leafs have an opportunity to prove that they have regained respectability by not only defeating an age-old rival that has dominated them in recent history but also by beating the reigning NHL champions. It's time to carpe the crap out of that diem, boys!

1C. Pacified on the Pacific

Currently, the Leafs' worst losing record is against the Vancouver Canucks. The Orcas have lived up to their reputation as killer whales by outscoring the Leafs 45-16 since the 2005-06 season. The Leafs record against Vancouver since they last beat them on November 23 2003 has been a pathetic 0-9-1.

Similar to the situation between Chicago and Toronto, the Leafs' losses to the Canucks receives greater attention in the media. Hockey Night in Canada and other Canadian broadcasters seize upon these sorts of stories behind match ups between Canadian teams. Moreover, a certain Canuck makes matters worse by offering these broadcasters sensational remarks on the Leafs.

Alexandre Burrows once admitted that he hates the Leafs and takes pleasure in beating them every chance he gets. Now you might think that Burrows was exaggerating when he said "hate." However, in that same interview he clarified that he hates the Leafs and Vancouver fans dislike them. Burrows has apparently pondered anti-Leaf sentiments long enough to define his feelings as hateful and those of Canucks Army as mere aversion.

Burrows also confessed that, for no particular reason, he's hated the Leafs since he was a kid. This makes the task of the Toronto's 2013-14 team clear: give Burrows a reason to hate the Leafs. By reversing the trend and thoroughly beating the Canucks from this year onward, Burrows will know exactly why he hates seeing blue and white. 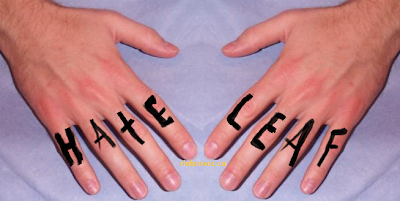 And maybe the Leafs will drive Burrows crazy enough to get these Knight of the Hunter themed tattoos!

Was there anything more painful than watching the Leafs head into a shootout last year?

The problem isn't just that they lost every SO: it's that only one player (the much maligned Tyler Bozak) scored in the second stage of post-regulation play. It's hard enough to win 1-0 NHL games in regulation--doing so in the shootout seems highly unlikely.

By notching a mere 3 goals in 24 SO chances, the Leafs had the worst goals/shots percentage last season (according to The Hockey News' yearbook).

The simple solution here is that other players need to score. Maybe Randy Carlyle needs to put greater emphasis on winning SOs when revising his approach to practices. Maybe players like Phil Kessel need to vary their approach to shootouts in order to score next year.

The best case scenario would be for other players to score AND Bozak to keep producing in the SO.

Scratch that: the very best scenario would be for other Leafs to score while allowing Bozak to net the SO-winning goal in order to counteract criticisms of his contract, cap hit, hairstyle--okay, basically everything he's done has been sharply criticized this off season. By adding SO expertise to his skills at faceoffs and short-handed goals, Bozak might just earn some respect (SPOILER ALERT: no, people will state despise his contract).

In terms of living up to his billing as an enforcer, Colton Orr has been pretty successful while making his rounds over the years. Orr has fought 25 out of 30 NHL teams. As of last season, Orr had fought the entire Eastern Conference--including the Toronto Maple Leafs when he played on other teams.

All that has changed due to realignment: Orr can no longer claim to have dropped the gloves with every team in the Eastern Conference now that the Detroit Red Wings have been added to the Leafs' division.

I don't know if Orr keeps a list of teams that he has yet to fight. Even if he doesn't, it's likely that he's circled every date with the Red Wings because each one will be documented by the producers of NHL 24/7. Since the Winter Classic is based around hockey's roots, I expect that Orr will try to engage someone from Detroit in a bout of "old time hockey" during or leading up to the Winter Classic.

Hopefully he doesn't try to fight Daniel Alfredsson: the universe might collapse if Leafs fans and Sens fans both cheered on Orr to clobber Alfie! 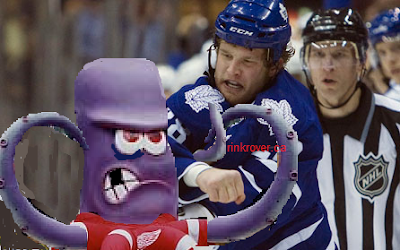 It's probably best to let Orr duke it out with Al the Octopus.