The One Where Alfie Takes a Break

For some strange reason, Daniel Alfredsson showed up to practice with his former teammates on Monday. He even wore an Ottawa Senators practice jersey just to make things especially awkward. Sure, it'd be worse if he wore a Detroit Red Wings jersey, but couldn't he just wear a generic training shirt? I don't imagine he's endeared himself to Red Wings fans by hanging out with the team that he dumped for Detroit.

I'm not sure how Sens fans reacted to this odd reunion between members of the team and their captain-turned-deserter, but I hope that the following captures what they would say if they could somehow appear on the scene as Robbie Hart from The Wedding Singer. 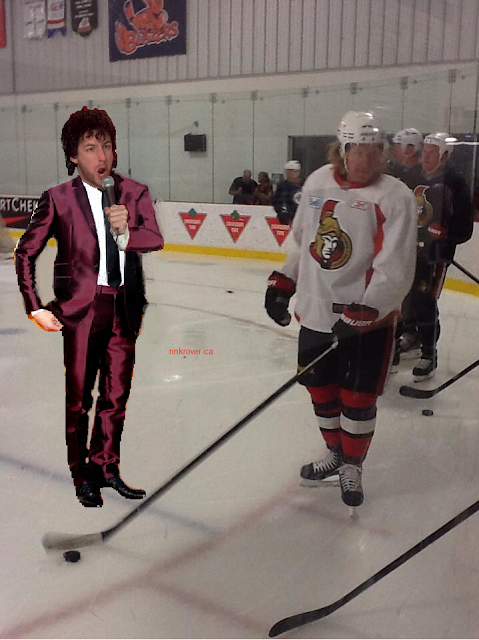 Daniel Alfredsson: I told you last night. I realized I was wrong, and I want to play in Ottawa. I can learn to deal with the fact that the Sens are just another hockey team, not a Stanley Cup contender.

Robbie Hart: I don't want you to lean to deal with that. That's not how NHL contracts work!

Daniel Alfredsson: I'll talk to you about this when you're feeling better.

Robbie Hart: Hey, psycho! I'm not going to feel better about this. It's over. So please get out of my Ottawa Senators jersey before you jinx the team and they never win the cup or relocate again!!!
Posted by Unknown at 23:03