The Next Ones: 6 Leafs Prospects Guaranteed to Infuriate Opponents

To whittle away the weeks before the preseason begins, bloggers have begun discussing the Toronto Maple Leafs' best prospects. Check out these links for lists of the best Leafs's best overall prospects by age or development system.

In order to contribute something different, I've put together a list of the Leafs' top prospects at each position based on (say it with me now) truculence, pugnacity, and belligerence. Yes, Brian Burke is back in Anaheim, but his mantra for the Leafs' team identity lives on through the philosophies of Dave Nonis and Randy Carlyle.

These baby buds might not tear up the score sheet, but they will make playing against them a pain in the neck, mouth, eye sockets, shoulders, and pretty much every other body part that can be hit in a game.

(If you're interested in the Leafs' present and past team toughness, check out these links for my All-Scar Team Part I and Part II.)

Bob McKenzie ranked Tyler Biggs as the toughest player, most physical player, and best fighter in the 2011 NHL Entry Draft. It's unfortunate that TSN pegged Biggs as a player who is most like Colby Armstrong given that the latter was a bust for the Leafs, an underwhelming player later on for the Habs, and now the latest NHL expatriate to find work in Sweden's top league.

Others such as Michael Trikos offer a more encouraging evaluation by comparing Biggs to Milan Lucic.

Biggs will probably end up playing a game that's somewhat better and worse than that of those comparable forwards. He'll be more durable and physical than the oft-injured Armstrong, but he probably won't put up as many points in a season as Lucic has. That's not necessarily a bad thing since (based on his 2012-13 season) Lucic isn't playing up to the expectations set by his current cap hit of $6 million per season.

A player who plays a Lucic-like game but with a lower cap hit would be a huge asset to the Leafs.

As a self-declared prototypical power forward, Biggs won't wow people with finesse. Rather, he'll pull his own weight by getting the ugly, fugly, and gorgonesque goals that players who prefer not to get their hair mussed (e.g. Phil Kessel) will shy away from. 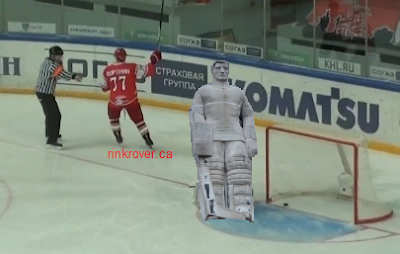 "Gorgonesque goals" are so petrifyingly ugly that the turn goalies to stone.

Next season will probably be the most important in Biggs' young career as he has the opportunity to make himself an invaluable player on the Toronto Marlies. No one wants him to accomplish just that more than Jim Hughes (the Leafs' Director of Player Development). A number of prime roster spots have opened up on the Marlies, and Hughes says that Biggs needs to seize a spot for himself in all situations--5 on 5, 4 on 4, killing penalties, and executing power plays.

There's an outside chance that Biggs will earn a spot on the Leafs, but it'd be more realistic for him to prepare to work hard with the Marlies in order to make himself indispensible.

As a London Knights fan, I was delighted when the Leafs picked Ryan Rupert with in the 6th round (157th overall selection) of the 2012 NHL Entry Draft.

Rupert, whose 5' 9" stature makes him tower unripe corn stalks*, won't be known in the NHL as an enforcer. He's more likely to be a fourth-line pest than a brawler. Brian Burke recognized this reality when he described Ryan and his twin brother Matt's style of play as "surly" rather tan pugnacious or truculent. 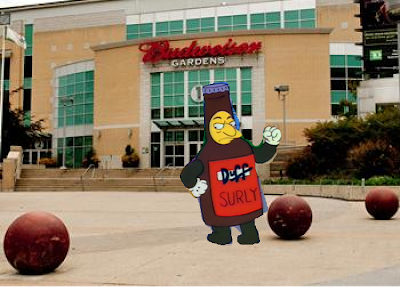 The Ruperts likely learned such behaviour from the security guard at Budweiser Gardens, home of the London Knights.

Rupert fits the mold of an undersized agitator like Brad Marchand to a lesser and greater extent. While he lacks Marchand's scoring ability, Rupert's feistiness makes Marchand look as cuddly as a grumpy Care Bear. Both Ryan and his twin brother Matt are hated by opponents in  the OHL for three simple reasons: the Ruperts beat them along the boards, in brawls, and on the score sheet. 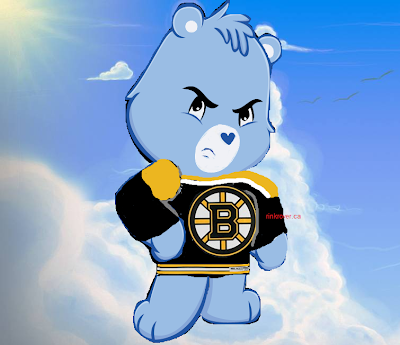 Pictured: Marchand after a teammate scratched the paint on his cloud car.

Rupert will nettle opponents with his aggressive play and clutch scoring. In the 2013 playoffs, for example, Rupert was nearly a point-per-game player as he tallied eleven goals and nine assists in 21 games. If he can translate even a bit of that prowess to the NHL, he'll help eke out some unlikely points with his fellow bottom liners with the Leafs.

Of course, Rupert is a number of years away from playing in the NHL. This is a good thing since the Knights host the 2014 Memorial Cup. The team's guaranteed spot in the playoffs will benefit Rupert by providing him with further seasoning as a high-stakes scorer and defensive forward.

Brad Ross has been a bit of a disappointment so far in his pro career, so I'm not giving giving him the MS Paint treatment. That kind of tough love is the least I can do to motivate him. It's also the most I can do as I have no power to influence prospects.

In his final two years with the Portland Winterhawks, Ross scored at above a point-per-game rate. He also notched more than 160 PIMs in both seasons. His ability to make an impression via racking up points and dishing out contusions has made scouts such as Dave Morrison and many hockey writers compare Ross to Darcy Tucker.

Ross can be excused to some extent for his lackluster 2012-13 season as a crowded roster and a broken wrist made it difficult for him to secure a spot on the Marlies. Kyle Cicerella attributes some of Ross' difficulties last season to problems with adjusting from playing in the top six in major junior to the bottom six in the AHL. That excuse works for now, but Ross needs to acclimate himself to succeeding as an agitating grinder since he doesn't project to be a top-six player with the Leafs.

Ross did prove that there's more to his came when he began putting up some points after returning to the Marlies after a conditioning stint in the ECHL. Like Biggs, he should be able to stick with the Marlies lineup next season as many veterans have left the organization.

However, whether or not he will make the most of this opportunity is uncertain. Signs that Ross might not live up to his billing as the next Darcy Tucker appeared in the prospect camp ahead of the 2012-13 season. Ross was noticeably less than his usual agitating self during scrimmages. When asked why he was off his game, Ross explained that it's awkward to harass players who will be teammates in a few weeks.

And, of course, the last thing that Brian Burke and the rest of Leafs management would want is to see prospects fight each other during camp.

Petter Granberg is the most decorated prospect in the Leafs system. Granberg has won gold at both the World Juniors and the men's World Championship tournaments. He also won the Swedish Elite League's championship last season with Skelleftea AIK.

As a shutdown defenceman, Granberg is often compared to fellow Swede and Leaf Carl Gunnarson--except that Granberg plays a more physical, aggressive, and meaner game than his compatriot.

Granberg stands 6' 3" tall, weighs 209 lbs. and feels no pain. He hails from Gallivare, a town in Sweden that is 100 miles north of the Arctic Circle and known to have "an astronomically high incidence of congenital insensitivity to pain." That means residents often do not register painful stimuli, which is a handy mutant ability to have when blocking a shot or absorbing a hit.

We can safely say that Granberg offers the closest thing to having one of the X-Men play for the Leafs. Of course, comparisons to the T-1000 from Terminator 2: Judgment Day are also acceptable.

Since Granberg is almost a lock to make the Leafs' blueline within the next few years, I'm going with a dark horse candidate for my second selection.

To call MacWilliam an unheralded prospect is a severe understatement. The 7th round selection (188th overall) at the 2008 NHL Entry Draft has been all-but written off by analysts. As a defenceman with limited offensive potential, MacWilliam earns his keep by mastering defensive positioning, hitting everything that moves, and fighting. Less generous assessors of his potential have referred to him as the least likely to succeed among the  Leafs' "coke machines."

MacWilliam, however, has a highly influential defender within the Leafs organization. Jim Hughes not only speaks highly of him, but calls others to task for overlooking the former captain of the University of North Dakota's NCAA hockey team.

In an interview for mapleleafshotstove.com, Hughes pointed out that Alec Brownscombe had overlooked MacWilliam when discussing the Leafs' most noteworthy prospects.

Perhaps Hughes' confidence is misplaced, but he seems certain enough to wager his own integrity on MacWilliam's ability to perform.  By saying that MacWilliam has "the pro mentality" and complimenting other aspects of his game, Hughes is putting his own credibility on the line for the underrated defenceman.

I imagine that these compliments are strategic--a maneuver to enhance competition and cultivate an elite mentality among the Leafs' defence corps. If so, Hughes shouldn't be ridiculed as Brian Burke was for being boastful. By showing a bit too much confidence in order to offset those who disregard MacWilliam, Hughes shows that he's willing to stake his own reputation on the team's depth players. That's an admirable quality to have in the person who is responsible for the development of those players.

Goalie fights are so rare that it's tough to say which net minder in the Leafs' system will become the feistiest. The organization has made my selection even tougher by releasing their underachieving back stoppers (Jussi Rynnas and Mark Owuya) following the 2012-13 season.

That means I have to pick among a group of goalies with whom I'm unfamiliar.

With that in mind, I'm going to make the safe bet and pick Drew MacIntyre as the Leafs' scrappiest goaltender. As a journeyman goalie who has bounced around the AHL and ECHL, MacIntyre is well- conditioned to fighting for time in the blue paint.

However, what's most impressive about MacIntyre is his ability to defy the laws of time and space like Neo from The Matrix. Check out this amazing behind-the-back-glove-save that MacIntyre executed last season with the Marlies.

If we could only upload highlight reels of the best saves in NHL history into his brain via headjack, MacIntyre could become the best goaltender in hockey history quicker than it took Keanu Reeves to learn Kung Fu.