Remember when Wayne Gretzky and David Copperfield teamed up?

The pseudo-religious observance of the 25th anniversary of "The Trade" has eclipsed another milestone in the history of "The Great One." This year marks the twentieth anniversary of the greatest coif-laboration in the 90s: the teaming up of the golden and raven mullets worn by respectively hockey superstar Wayne Gretzky and illusionist David Copperfield.

Here are the highlights from Gretzky's guest spot on "The Magic of David Copperfield XV: Fires of Passion." NOTE: the title is a bit of a misnomer as this was one of the few specials in which Copperfield didn't creepily hit on his guest star.

The scene begins with Copperfield setting up the premise: "We're in my warehouse with Wayne Gretzky, and he's going to let me tear up his $500 000 baseball card just so I can try to magically put it back together." NOTE: That was not an illusion. Copperfield actually sawed an infinitive in half only to leave the sentence for dead. Apparently he's no wizard of grammar.

The baseball card in question features former Pittsburgh Pirate Honus "The Flying Dutchman" Wagner (1874-1955). There are few extant copies of this card, which is probably why Copperfield refers to it as "the Mona Lisa of baseball cards." That comparison, of course, is absurd: Lisa del Giocondo (the woman immortalized in Leonardo da Vinci's portrait) was an outfielder who was widely reputed to be more caustic than Ty Cobb when he served in the US Army's Chemical Corps during World War I. 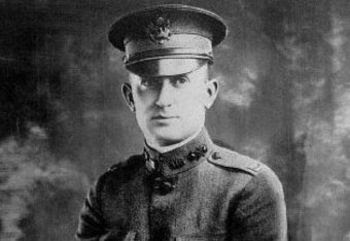 Seriously, Ty Cobb belonged to a branch of the USA Army that was responsible for subjecting the enemy to gas and flamethrower attacks. (Read more here.)

Originally produced by the American Tobacco Company, Wagner's baseball card became valuable after the "The Flying Dutchman" forced the company to halt production. (Wagner detested the idea of kids having to buy tobacco in order to get his card.)

Before beginning the trick, Copperfield asks if Gretzky is entirely comfortable with the plan to destroy and restore his valuable property. Gretzky pumps Copperfield's tires by recalling how Americans entrusted the illusionist with a national landmark. (Copperfield had previously made the Statue of Liberty disappear.)

However, Gretzky also deflates Copperfield's ego by telling him that the card is fully insured. As we all know, having insurance means that you can have others destroy your property and still be reimbursed for the damages. SPOILER ALERT: no, it doesn't. Destroying property to make a bogus claim is illegal. What we have here is documentary evidence of Wayne Gretzky conspiring to commit insurance fraud.

Now you might expect Copperfield to pull the old switcharoo by using two baseball cards--tearing up one and swapping it out for a duplicate. Well, David anticipated your cause for disbelief. He asks Gretzky to sign the card so that we know that it's the same one. (Of course he could have had Wayne sign the duplicate before this scene was filmed, but whatever--magic!)

In a moment of unapologetic Canadianness, Gretzky politely protests Copperfield's request that he sign the card because doing so would debase its value. Aw shucks, Wayne, don't you think someone might want your signature as proof that this isn't any ordinary Honus Wagner card but the one once owned by "The Great One"?

Copperfield parries Gretzky's insincere modesty by arguing that the signature will increase the value. David estimates Gretzky's autograph to be worth about $100 (yep, the US dollar was much stronger in 1993--back then Americans used matchsticks made of ivory to light cigars stuffed with Dodo feathers).

Gretzky, always the self-promoter, retorts that his signature will increase the card's value "by at least ninety-nine" dollars (daww!).

As Wayne enriches the value of the baseball by signing it, LA Kings owner (and co-owner of the card) Bruce McNall tries to constrain his obvious displeasure.

Perhaps the sight of Gretzky's signature reminds McNall how much it cost to trade for and re-sign the superstar player who had not yet and never would help the Kings win their first Stanley Cup. McNall only looks displeased as the card is signed: he cracks jokes when it's being torn up.

Next, Copperfield undermines his expertise as an appraiser by quartering the baseball card and saying, "Four pieces, each worth about $125 000 each only if I put them back together." Let's put aside the fact that you can't cut up a card into numerous pieces and assume that each retains an equal fraction of the value attributed to the whole.

Let's instead look at what Copperfield says: the four pieces are worth X amount of dollars only if they are put back together? No, if they're reassembled, the whole thing is worth $500 000 and the pieces are worthless because they no longer exist! The pieces can't retain value once they've ceased to be. Ugh!

Always outdoing himself, Copperfield immediately offers an even more imbecilic remark when he tries to ease his guests' anxiety. He reminds Gretzky and McNall that their insurance will cover the card's loss if he can't put it back together. McNall (the only voice of reason in this scene) chimes in to inform Copperfield that "the insurance only covers accidental damage; it doesn't cover willful destruction."

It's at this point that the excrement gets real. Copperfield looks straight into the camera with an expression that perfectly captures the sudden apprehension of self-loathing that is commonly experienced by alcoholics during moments of clarity.  He says directly to us, "Well, I guess the heat's on me."

How did this moment not garner Copperfield an Emmy for best dramatic performance?

Copperfield's choice of words are apt given the stakes. If he fails to fix the card, he will owe a lot of money to powerful people. Since Copperfield's warehouse is located in Las Vegas, it's worth remembering a crucial quote, from Martin Scorsese's Casino, that discuses the usefulness of the desert surrounding Sin City: "A lot of holes in the desert, and a lot of problems are buried in those holes."

To avoid becoming one of those interred problems, Copperfield quickly reassembles the card.

McNall is probably thinking, "If only he could make the Kings' roster cohere with such ease!"

So there you have it: the card is restored, right? Well, it's not in mint condition. Wayne, who didn't object when Copperfield claimed that each piece of the card was worth $125 000, suddenly gets wise and tells David that the creases remaining on the card ruin its value.

Luckily, Copperfield isn't just a guy with voluminous hair: he's also an iron and ironing board!

Next, Gretzky petulantly pleads, "That's great, David, but what about the signature?" Oh, you mean the signature that increased the card's value? The autograph signifying that this card is rarer than others because it was once owned by the greatest hockey player ever?

Since Wayne insists, Copperfield calmly removes the signature with as much ease as Gretzky removed himself from the St. Louis Blues. (Indeed, Wayne's signature may have spent more time on that card than Gretzky did in a Blues unifrom.)

Now something unsettling happens. As Copperfield finishes removing the signature, he tells his guests, "Remember: you collect baseball cards; I collect autographs."

And with that, he peels the signature off, rolls it into a ball, and flicks it at the camera saying, "Name dropper!"

Gretzky and McNall laugh and walk away, carelessly leaving Wayne's valuable signature on the ground. How do they know Copperfield won't return later, iron out the autograph, and use it unscrupulously? After all, he just showed them that he can mangle things and restore them to mint condition, and he even sinisterly admitted to collecting autographs. What are his intentions, exactly?

I suspect that, from this point onward, Copperfield usurped the role of Gretzky's agent by applying the stolen signature to various lucrative deals. These probably include everything from signing "The Great One" to play for the Rangers, and even to shill for products that have nothing to do with hockey. 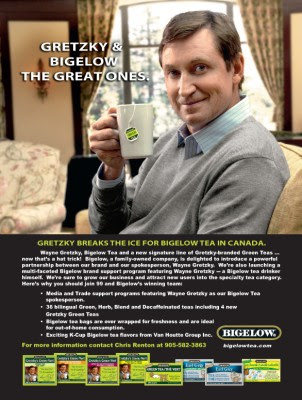