Unbreakable Records: The St. Louis Blues and the 1978 Draft

This article was originally posted on thehockeywriters.com. I've added some extra pictures to this repost to make rereading it more enjoyable!

In 1978 the St. Louis Blues set an unbeatable record at the final NHL Amateur Draft. In the following year, the NHL allowed teams to draft players from the defunct WHA and those who had played overseas. In light of these changes, the league renamed the annual inventory-taking event as the NHL Entry Draft to reflect that many players selected had already played professional hockey.

In what has become the best experiment undertaken by a sports team in order to determine whether quality or quantity is better, the St. Louis Blues accumulated 31 draft picks in 1978. Sadly, Baskin Robbins has never commemorated this unprecedented and unrepeatable achievement.

To make a treat designed that memorializes the St. Louis' draft, I recommend throwing together bits and pieces of what's left from a dozen other desserts.

So how did St. Louis become flush with draft picks?

They reportedly added 19 picks to their arsenal by purchasing them outright for cash. The NHL responded to this ploy by banning teams from acquiring future picks in the same manner. However, they might as well have just allowed teams to find out the hard way that shelling out money for draft picks doesn't pay. As I'll discuss further below, St. Louis learned this lesson as they watched the majority of their prospects change from NHL hopefuls to no-shows.

Here's some highlights from St. Louis' legendary scheme, including some other records that they set in 1978 and an overview of how the Blues' attempt to flood their organization's system with new talent panned out. Spoiler alert: it didn't. 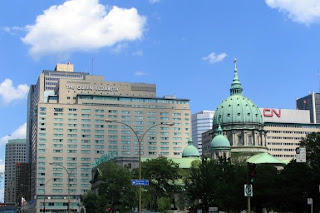 From 1963-1979, the NHL held its Amateur (and, later, Entry) Draft at The Queen Elizabeth Hotel in Montreal. This hotel was also the site of John Lennon and Yoko Ono's second "be-in" where they recorded "Give Peace a Chance."

1. Breakdown of the Picks by Round and Overall Standing

Given the number of picks, it might seem surprising that the Blues only had one selection in the first round and none in the second or fourth. They had the most picks in the 13th round (6 selections), which, superstitious commentators would say, may have jinxed their draft strategy as only 5 of the players drafted went on to play in the NHL.

Since the NHL has ceased including any double-digit rounds, it seems safe to say that the Blues' record for most picks in the 13th round will go unbroken. Less safe but likely unbreakable records set in the 1978 draft include the most consecutive odd- (203, 205, 207, 209) and even-numbered picks (214, 216, 218, and 220). This record, however, is protected by the trauma that researchers experience when combing through records of past drafts in order to count numerical sequences. I tried to chart the entire history of the draft and nearly went permanently cross-eyed, so perhaps we should spare ourselves the trouble and say that the Blues hold this record instead of trying painstakingly to verify it.

Besides, this draft yielded so little for St. Louis aside from obscure records, so we might as well let the franchise have one more.

Of the forwards that the St. Louis Blues drafted in 1978, 4 played left wing, 4 played centre,  and 9 played right wing. The team also drafted 8 defencemen and 3 goalies. The remaining players played a combination of positions (RW/C, LW/C, and D/C respectively).

Assuming that each prospect could make it in the NHL, the Blues drafted enough players to form a roster with four lines of forwards, four pairings of defencemen, and an extra extra goalie in case the backup was injured.
When you look at how the Blues essentially put together a replacement team, it seems that there must have been some method to their madness. Unfortunately, we don't know exactly why they assembled this well-stocked troop of replacement players. Perhaps a fortune teller told them that they would lose the entire team in the near future to some catastrophic event, so the team's management decided to have a backup team waiting in the wings for that eventuality.

If any of you readers can suggest or point to a specific explanation, I'd be glad to revise this post and include those insights.

The Blues drafted 19 Canadians, 8 Americans,one player from Finland, and a single Swede.

They also picked players from two countries that no longer exist: they drafted a player from West Germany and another from the U.S.S.R.

Surprisingly, despite having all these picks, the Blues rank third in terms of the most Canadian players selected by one team in a single NHL draft. Ahead of them are the New York Rangers who picked 21 Canadians in the 1974 Amateur Draft. At that same draft, the Washington Capitals set an NHL record by selecting 25 Canadians with their 25 draft picks. Washington's steadfast "buy Canadian" policy in 1974 must have pleased Don Cherry.
However, the fact that this corps of Canadian players did not help the Capitals win the franchise's first Stanley Cup suggests that there may be a flaw with his mathematical theorem for producing championship teams: 23 x 1 Canadian - visors + fighting = Stanley Cup.

Try to disprove this one, good Will Hunting!

One record that the Blues came close to achieving was selecting the first player from West Germany ever to be selected in the NHL Entry Draft. Indeed, the Blues might feel somewhat cheated of this milestone as they selected Gerd Truntshcka with the 200th overall pick--a mere four spots after the Atlanta Flames used the 196th overall selection to make Bernhard Englbrecht the first West German ever drafted by an NHL team.

As I mentioned earlier, only 5 players selected by the Blues in the 1978 draft played in the NHL. That means their organization had a 16.1% rate of success. If that number doesn't sound bleak enough for you, consider that the 16.1% refers to players who played for at least one team in the NHL. Only 3 players (or 9.6% of those drafted) played for the St. Louis Blues.

Those three players are Wayne Babych, Paul "I Am the Walrus" MacLean, and Jim Nill. Combined, these players suited up for 573 regular-season and 44 playoff games with the Blues over their careers. 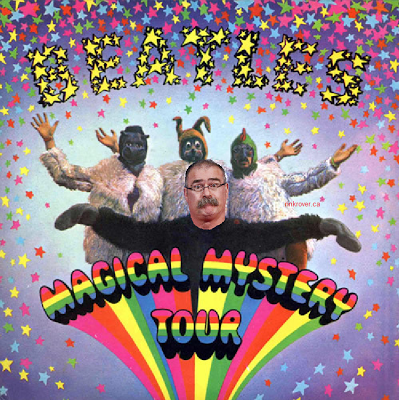 Paul MacLean was featured prominently on the original cover for The Beatles' Magical Mystery Tour.

While draftees Jim Nill and Bob Froese would each make an appearance in the Stanley Cup Final during their careers, neither these two nor any of the other players drafted by St. Louis in 1978 would take the Blues to the Final. Moreover, none of the players drafted this year would win the Stanley Cup. While it may be more injurious for St. Louis' cup-less club to see a player drafted by them win hockey's holy grail with another team, it nevertheless suggests that the organization spent a lot of money on inadequate or pathologically underachieving players.

Of course, some of the Blues' picks would achieve other accolades. For example, 3/5 of the prospects that made it to the NHL were selected to play in NHL All-Star games (only one, however, was chosen when playing for St. Louis). Although he never played for the Blues, St. Louis prospect Bob Froese was listed on the NHL's second All-Star team and was also awarded the Jennings Trophy (along with Darren Jensen) while playing with the Philadelphia Flyers.

To cut away from this unflattering close up of the St. Louis Blues and discuss the 1978 draft as a whole, I'll wrap up this post by mentioning another record set during the event. This record will certainly be surpassed over time, but it is nevertheless fun to consider for the moment. The draft for which St. Louis accumulated 31 picks also featured the selection of more current (as in, up to today's date) NHL General Managers and Coaches than any other draft to date. Here are the GMs and coaches of today that were the aspiring draftlings of 1978:

Here's a collage that I put together from pictures of these coaches and GMs circa their year. 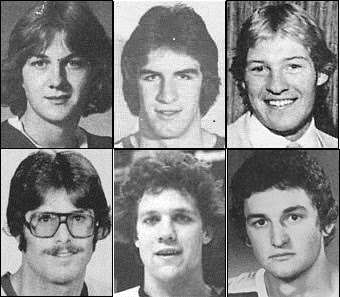 So, when you're watching the next draft, keep in mind that the draftees of today (regardless of in which round they are selected) may be the future catalysts of tomorrow's cup champions!