Oswald: What dost thou know me for?

Kent: A knave; a rascal . . . a base, proud, shallow, beggarly, three-suited, hundred pound, filthy, worsted-stocking knave; a lily-liver'd, action-taking, whoreson, glass-gazing, superserviceable, financial rogue; one-trunk inheriting slave; one that wouldst be a bawd in way of good service, and art nothing but the composition of a knave, beggar, coward, pander, and the son and heir of a mongrel bitch; one whom I will beat into a clamorous whining, if thou deny the least syllable of they addition.

Full disclosure: I'm updating a blog post that I wrote originally for the trade deadline. The message remains the same, but I've changed a few things here and there to fit the possibility of Alfie leaving Ottawa as a free agent.

Fuller disclosure: I lived in Ottawa for years and attended a number of Sens games. Their arena has some of the best sight lines among NHL facilities. There are few poor vantage points from which to see a game, but I still wouldn't say that the experience is entirely worth the drive to Kanata.

Fullest disclosure: The only decent type of beer at Canadian Tire Centre is Rickard’s Red, and it’s hard to find.

Although no one is suggesting that there's a strong possibility of Daniel Alfredsson signing with another team, commentators from every major Canadian sports outlet are reporting that many teams are pursuing Alfie's services. The Boston Bruins are making the strongest push for #11, but teams such as (Ottawa's new rival due to realignment) Detroit Red Wings and San Jose Sharks have expressed interest. It's also safe to assume that Paul Holmgren has at least invited Alfie to a money fight in his office as the Philadelphia Flyers seem keen to throw money at everyone these days.

I haven’t heard any Sens fans supporting the possibility of Alfie moving on, so it's probably safe to assume that they are virulently opposed to this suggestion. I wouldn't be surprised if Senate pages marched on Canadian Tire Place with "Stop Alfie" signs ahead of the official commencement of free-agent signings tomorrow at noon.

Here's my take on the situation. Bryan Murray and Eugene Melnyk can't let Alfredsson walk simply because he means too much to the franchise and the community. Sure, another player could step up and be the face of the franchise (although I haven’t heard anyone cheer “Spezza,” “Michalek,” or “Phillips” when the game clock ticks down to their corresponding numbers.) But it would be best for the organization and for Alfie himself if #11 retired as a Senator.

Why? Because the passion of Ottawa fans that makes them (excessively, I might snark) adore Alfredsson will make them hate him even more if he plays for another team. Don’t believe me? Here’s some anecdotal evidence in support of my claim. I used to see a decent number of Sens games when I lived in Ottawa, but I can only recall one time in which the organization used a commercial break to honour their top scorers on the big screen. The response was highly surprising. 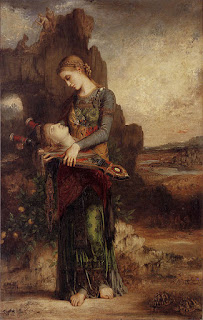 Ottawa fans apparently hate players who did well for them and then left the organization. Mats Sundin created a lot of controversy during his last days as a Leaf, but he still received a standing ovation when he returned to the ACC as a Canuck. Upon returning to Canadian Tire Centre as a Penguin or Bruin (or whatever else the rumour mill would have him), Alfredsson would probably be torn apart just like Pentheus when he put a damper on a rowdy Bacchanalia.

Apparently it's not a REAL toga party unless someone loses limbs.

Trading Alfie could mortally wound the spirit of Sens fans and the franchise itself. Without Alfie, I’m not sure many fans would endure the long bus ride to and from Kanata to watch the team. Alfredsson’s performance in Ottawa’s rink and in the community in general has endeared him to people so much that Ottawans probably believe that he could turn the water in the Rideau Canal into Lingonberry wine. If the organization trades him, he won’t even be able to show his face in any of the 3,000 Royal Oaks in the city (maybe not even the one in Kanata). It would be best to ensure that the cornerstone player retires as a Senator and continues to work in the organization at some level thereafter. (I’d suggest having him replace Denis Potvin as the colour commentator for Sportsnet Sens).

Letting Alfie walk would damage his enviable reputation and perhaps undermine the very foundation of Ottawa’s franchise.
Posted by Unknown at 14:20