Tim Leiweke, CEO of Maple Leaf Sports & Entertainment, spiced up an otherwise dull week in the offseason by offering some provocative remarks regarding his plans for the Toronto Maple Leafs.

Leiweke's plan to remove from the Air Canada Centre trappings of the last Toronto Maple Leafs dynasty has made commentators react in derision or dismay.

I found the new CEO's decision to be intriguing, which isn't necessarily a good thing. I study the significance of the past to a group's sense of community and identity, so Leiweke's actions present an interesting topic for study in the same way that a political scientist would gain a lot of material for discussion if a coup turned the UK into a theocracy.

One of the things that makes this whole news interesting is the scale and context of Leiweke's plans. This is perhaps the least significant attempt to break with the past that I've had a chance to consider. In the 16th century, attempts to quell resistance to the English Reformation resulted in the state-sanctioned destruction of objects that preserved memories of England's Catholic past. It's easy to see how reminders of an outlawed set of religious and political beliefs would be suppressed, but what is the point behind a non-violent iconoclastic campaign against a sports team's past? Are not a team's history and traditions essential to the vitality of its fan base?

The only comparable situation that I can think of for this move is the Seinfeld episode in which George Constanza tries to get fired from the New York Yankees (or, as James van Riemsdyk would call them, the "Toronto Maple Leafs of Major League Baseball"). George's efforts involve soiling Babe Ruth's uniform and dragging a Yankees' World Series trophy through the organization's parking lot.

If tearing down the past is Leiweke's intention, then he must be sorely disappointed with David Clarkson's decision to wear #71 instead of #17 (the latter being the same number of his boyhood hero Wendel Clark) because he doesn't feel he can live up to that honour.

If Jerry Seinfeld and Larry David could script a sitdown between Leiweke and Clarkson following this decision, it'd probably go something like this:


Leiweke: Clarkson, you've been here less than a fortnight and you've already let me down. MLSE wants to look to the future. We've gotta pave over the past like it's Richard III's grave. Wendel Clark was nothing more than a punch-drunk mullet. And here's something I just found out recently: despite his nickname, Clark wasn't the real Captain Crunch.

Now check this out (removes his jacket to reveal that he's wearing Red Kelly's old jersey). You know what I hate about Red Kelly? He knew there was no "I" in "team," but he capitalized on the "m" and "p" in Maple Leafs to win a seat in parliament during the 1962 cup run. It's despicable. The team won him a seat and he couldn't even get the Canadian flag to be blue and white. No, he showed his true allegiance to Detroit by making the flag red and white. Why should we cherish such traitors?"

Incidentally, Red Kelly's efforts to convince the House of Commons to stop using the Union Jack and adopt a distinctly Canadian flag in its place met strong opposition from former Leafs owner Conn Smythe. Smythe fought in the First World War under the Union Jack, and the war forged an affection for the contentious ensign that made him staunchly oppose Kelly's support for this political project. Leiweke, then, isn't the first Leafs exec to embroil the Leafs in a conflict surrounding its attitudes toward the past and present.

But how will Leiweke enforce this ban on commemorating the past? Some players from Leafs history still very much alive and strongly opposed to MLSE's attitude toward their accomplishments. Moreover, some of the franchise's stars and accomplishments have been imprinted on Canadian culture. Will the first Leaf who brings a double-double to practice have to take his coffee on a bag skate because the Tim Hortons cup reminds everyone of those championship teams that have suddenly become taboo? 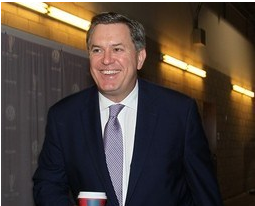 I imagine that Leiweke singled out the 1961-62 team in his comments to avoid contradiction. He couldn't claim that the Leafs want to divorce themselves from teams of the 60s in general because the current team uses a revision of the 1967 champions' uniforms as a third jersey. By maneuvering around obvious contradictions, Leiweke makes himself susceptible to accusations of hypocrisy. Such allegations aren't entirely unjustified: Leiweke deserves some scorn for proclaiming his decision to put aside the team's past during the offseason before the Leafs play in the 2014 Winter Classic--an event that is characterized as a celebration of hockey history.

Why would Leiweke open himself up to such criticism? Perhaps he has sensed that the organization's glorious past are creating expectations that stifle the growth of current players and eclipse their accomplishments (however meager those may be in comparison). To prevent those players from being criticized by the press, Leiweke deflected attention away from them by representing the decision as his own policy. If that's the case, then it's admirable of MLSE's new CEO to draw the ire of fans and reporters toward himself and thereby allow his personnel to focus on their on-ice performances.

Furthermore, I wonder if Leiweke tried to deflect the already-deflected ire over the Leafs' treatment of the past by offering more fodder for diatribes against him. By announcing plans for the upcoming (?) Stanley Cup parade in Toronto, many reporters and bloggers focused on the ridiculousness of the CEO's misplaced confidence rather than his displacement of images of the past.

Now you may object to this evidence by saying, "But the teams played a dozen fewer games back then." That's exactly my point: we can't make accurate comparisons between NHL teams now and 46 years ago because the game has changed dramatically in that period. If we're going to use figures from bygone eras as benchmarks for how today's players should perform, we should at least pick ones with records that still hold up to today's standards. If not, we might as well put up pictures of Greek heroes and tell current Leafs to emulate them. 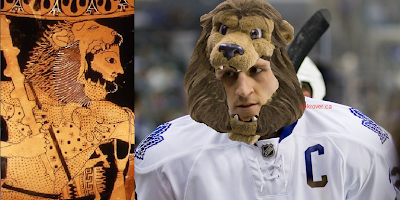 WARNING: If you tell Phaneuf to ask himself "What Would Herakles Do?" before a game, he'll probably turn Los Angeles Kings mascot Bailey the Lion into a headdress just as Herakles turned the Nemean lion into a fashion accessory.

Creating bonds with the past can be an effective form of advertisement. It can promote a sense of continuity between teams then and now that gives fans and players a sense of both history and purpose. But such such bonds can also be detrimental when a team outplays and yet doesn't outdo former champions in terms of tangible accomplishments. Chief among those accomplishments are Stanley Cup victories, which were likely much easier to win back in the Leafs heyday.

Take, for example, this Canadian recruitment poster from the Second World War. 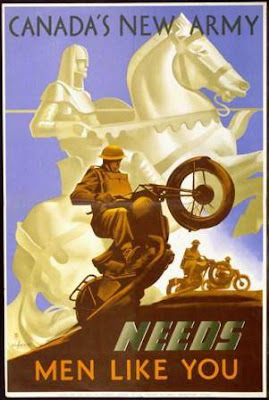 Side note: Why doesn't the Calgary Stampede include an event in which motorcyclists and knights battle each other from their mounts?

The poster's appeal to chivalry would be effective if, by filling minds with ideas of knightly deeds done for noble causes, it enticed men to join the armour. However, its romanticizing of modern warfare would be an utter failure if it led new recruits to attempt jousting with machine gunners. A similar problem arises if current players try to emulate how the game was played before such technological advances as video coaching, composite sticks, and the Moon Landing.

Leiweke's policy toward the past is fraught with inconsistencies, and it's impossible to remove all memory of bygone heroes from the minds of current Leafs. Nevertheless, diminishing the presence of former Leafs in the ACC may help the current roster focus on competing with present teams rather than measuring themselves against former Leafs.

The problem is that Leiweke needs to live up to his promise of making the Leafs into champions or else he might damage the brand rather than enrich it (as he's pledged to do). Sports generally thrive on the rich histories of teams, and few (if any) fans have relied more on a glorious past to suffer through "the slings and arrows of outrageous fortune" more so than the Leafs Nation over the last 46 years.

By "sacrificing a few sacred cows" in order for the current Leafs to make their own legacy, Leiweke risks eroding the foundations of Leafs nation. After all, milking those "sacred cows" for all they're worth has been the bread and butter of the Leafs over the lean years during this ongoing cup drought.