The first part of this series sparked some lively discussion on twitter Tuesday, but there still isn't enough feedback to put together a full roster of famous fighters from Toronto Maple Leafs history. For now, I'll proceed with my list of All-Scars.

To recap, my top three fighting forwards ranged from players prized mainly for fighting (Colton Orr), scrappers who could score (Darcy Tucker), and stars who excelled at scoring as well as scrapping (Wendel Clark).

Today I'm discussing players with a similarly broad scope when it comes to fighting. Two of the guys chosen are well known for their fighting while the third  merely found himself engaged in a memorable fight.

It was tough picking only two defencemen since their position requires the most confrontations between players.

Making things even more difficult was the fact that some players fought battles during their careers that went far beyond one-on-one bouts.  Borje Salming, for instance, isn't known primarily as a fighter on the ice, but he did have to carve out a career for himself as one of the first Swedes in the NHL by constantly fighting the stereotype that European were soft and focused more on skill than toughness. Even though he won't appear on many All-Scar Teams, Salming certainly deserves recognition for pummeling this stereotype and, in so doing, making it easier for other Europeans to join the NHL.

Here's the second part of my All-Scar Team.

As in the first post, I've included one current Leaf to the team. By choosing Mark Fraser, I hope to offer some consolation to members of Leafs Nation who (regardless of what comes of Fraser's filing for an arbitration hearing to determine his next professional contract) will be outraged by the result.

In a preemptive strike against such negativity, I'm going to focus on the bright side of the Leafs keeping Fraser for at least another season.

Of all the blueliners currently employed by the blue-and-white, none is more willing to scrap than Mark Fraser. Indeed, if we combine his AHL and NHL battles, Fraser fought more in the 2012-13 season than any of his teammates.

Fraser also has an excellent sense of duty and showmanship. When the Leafs traded Keith Aulie to the Tampa Bay Lightning in exchange for Carter Ashton at the 2012 NHL trade deadline, they acquired Fraser later in the day as as Aulie's replacement.

It's rather common for a replacement to feel compelled to spar against the guy he replaced in order to justify his assumption of the other person's spot. Bill Murray, for example, seems to have this way when he started an altercation with Chevy Chase during the third season of Saturday Night Live. Murray had been hired in the second season of SNL to plug a hole in the show's roster that Chase created after departing suddenly after the show's inaugural season. When Chase returned to host SNL in 1978, he received a bellicose reception from Murray. (You can read more about that story in this book.)

Entering his first match-up against Tampa Bay as a Leaf, Fraser presumably channeled his inner Bill Murray by breaking out into fisticuffs with Aulie.

Here's the fight between the two towering defencemen.


As Joe Bowen notes in the above clip, this match was not only between a former Leaf and his replacement but players whose names recall two of the best boxers in this history of the ring: "Smokin' Joe" Frazier and Muhammad Ali. Frazier fought Ali three times and ended with a 1-2 record against the boastful boxer. If we accept (as Bowen seems to suggest we should) that Fraser is the spiritual heir to "Smokin' Joe," then he tied up the series with this resounding win over Aulie.

Since Fraser's fight card records him dropping the gloves 8 times in 30 games with the Toronto Marlies and 9 times in 45 matches with the Leafs in the 2012-13 AHL and NHL seasons respectively, you might expect him to take it easy during the off season. You'd be wrong in that assumption.

Less than a week after the off season officially began, Fraser instigated a fight with MLSE by refusing a two-way contract offer. Apparently for Fraser, it's NHL or bust (Toronto's salary cap) next season. Fraser's chief bargaining point during arbitration will be what some hockey writers (e.g. Cam Charron of theleafsnation.com) consider to be a flukey plus-minus stat from last season: according to nhl.com, Fraser was a +18 over 45 games in the 2012-13 NHL season.

By relying on such stats, Fraser isn't just throwing the gauntlet down to challenge MLSE but also every blogger who considers plus-minus to be an irrelevant stat. Since pretty much every blogger holds that view, it's safe to say that if you have a blog that has ever used a spreadsheet--or even a calculator in a post, Mark Fraser is looking for you!

To put things simply, George Reginald "Red" Horner is the scariest defenceman in Leafs history. "Red Horner played for the Leafs from the 1928-29 to the 1939-40 NHL seasons. During that time, he accumulated enough on-ice infractions to make him the sixth most penalized player in Leafs history.

That record might not seem impressive, but in Horner's day, the NHL;s officials were reluctant to call penalties unless someone caused significant bodily. That's the view offered Esteban, who notes that a mere 85 PIMs were enough for Horner to be the league's penalty leader during the 1938-39 season.

Horner took his poor reputation in stride. In this interview, for example, he shrugs off Foster Hewitt's question, "How does it feel to be called a 'bad man,' Red?" Horner goes on to explain how he can play with a cast on his broken hand.

Like Mark Fraser, Horner played much of his career in minor leagues until the Leafs thought his talents were being underused. In 1927, owner and GM Conn Smythe despaired that his Leafs lacked sufficient levels of truculence and pugnacity to compete against the marauders employed by the Montreal Maroons. (Well, he didn't use those exact words which were made famous by Brian Burke, but the gist of Smythe's sentiment was Burkean.)

In order to toughen up the team, Smythe personally poached Horner from the Toronto Marlboros: after seeing Horner play a matinee game, Smythe offered the rugged defenceman a spot on the Leafs' blueline immediately following the match. He would play his first NHL game that evening.

Since he was never considered to be an elite defenceman on his team let alone in the league, it seems that Horner was inducted into the Hockey Hall of Fame in 1965 for setting an NHL record by leading the league in penalty minutes for eight straight seasons. It's quite possible that Horner is the first and perhaps only pure enforcer to make it into the HHOF. Horner also became the first NHL player to tally 1000 penalty minutes, beating Boston Bruins brawler Eddie Shore to this milestone by two years.

That's not the only time Horner famously beat Shore. On December 12 1933, Eddie Shore attempted to rush the puck into the Leafs zone when he was thunderously checked by Leafs defenceman Francis Michael "King" Clancy. Disoriented by the hit (concussion-like symptons?), Shore sought vengeance by delivering a devastating trip on his attacker. However, Shore targeted the wrong guy: it wasn't Clancy but Leafs star Irvine "Ace" Bailey that he had felled. That fall put Bailey's life in peril.

As Bailey slipped in and out of consciousness as he lay sprawled out on the ice, Horner demanded that Shore explain why he attacked the Leafs star viciously. Shore simply grinned and tried to skate away, but Horner decked him with a single punch that left Shore unconscious. Shore would be medically treated alongside Bailey although Shores' injuries were far less severe. (The fracture to Bailey's skull was life-threatening.)

Years after his most famous altercation with Shore, Horner was rewarded for his many gritty contributions to the team by being named captain of the Leafs for the final two seasons of his career. He is perhaps the nastiest defender to be made captain in NHL history (although Chris Pronger and Zdeno Chara might challenge that claim). 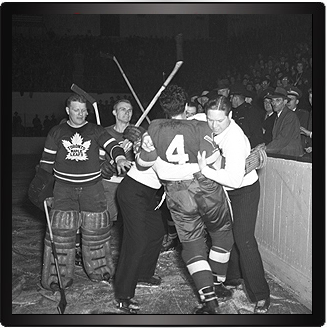 Red Horner would later switch sides by working as a linesman in the NHL following his retirement as a player. (Source: Hockey Hall of Fame digital archives)

This selection is the most difficult to make since goalie fights are rare and (with the possible exception of Ron Hextall) there are no enforcers among the ranks of NHL goalies. In order to decide which net minder to put on my All-Scar Team, I've deferred to hockeyfights.com and its list of the best goalie fights in NHL history.

The third highest-rated fight by the community of fans at hockeyfights.com belongs to Ron Hextall and Felix Potvin. This scrap took place on November 10 1996 when Potvin's Maple Leafs visited Hextall's Philadelphia Flyers.

Despite Hextall's superior pedigree as an agitator, Potvin held his own in the scrap. Fans are generally split regarding who won the fight: as of today, 42.5% of votes have been cast for Hextall; 38.4% for Potvin; and 19.2% for a draw.

Who would you say won this famous goalie fight?