Last week, Pension Plan Puppets released lists of the best and worst Leafs of all time based on a survey taken by the website's community of readers.

Needless to say, I was rather dismayed by Colton Orr's appearance on the worst team's first line. Apparently all of my efforts to change people's minds about Orr have failed.

After taking time on a rainy heath to rail against humanity's unjust treatment of good people, I thought it would be more productive to put together a similar team in which Orr and his particular brand of hockey (read: brawling) would be appreciated. Ideally, I would conduct my own survey in order to crowdsource the best Leafs team based entirely on outstanding achievement in the field of fighting.

The only problem with this plan is that my last attempt at a poll failed miserably (due, perhaps, in part to my insinuation that Vancouver wasn't really a part of Canada).

Since I can't rely on feedback, I'll have to come up with my own team. The problem here is that I'm rather young as a Leafs fan, so I don't know many of the team's past pugilistic greats. It's easier to put together a team of the best players in Leafs history because those marquee players are highly googleable.

Instead of putting together a full team, I thought that I'd share which players (one drawn from each position) I consider to be the best based on their pugilistic prowess. Hopefully disagreement over my opinion will spur debate that will eventually lead to the development of a 23-man all-star roster filled with fighters.

For each player, I've added some details on his best or, at least, most memorable fight. Wherever possible, I've included clips of those bouts!

Let's get the most obvious selection out of the way first. If Stanley Cups were won by fighting alone, then Colton Orr would be a one-man dynasty. I'm so confident in Orr's ability to beat up on other players that I've already earmarked him as the Leafs' champion should the league consider my idea (SPOILER ALERT: they won't) of replacing the shootout with single combat.

As a pure fighter who was listed 2nd only to Geroge Parros in The Hockey News' most-recent list of "The Best of Everything in Hockey," Colton Orr gets a lot of grief for not being much of a scorer, skater, or passer. Indeed, there may be truth to the rumour (which I'm starting right now) that Randy Carlyle brought a massive blue rock into the Leafs' backstage area just so that Orr would have the second stoniest hands in the dressing room.

While Orr won't win any scoring titles in his career, he has perhaps set a record already for the most penalties incurred in the least amount of time. He played all of two seconds in a game between the Leafs and Buffalo Sabres before he was assessed 29 penalty minutes, including a game misconduct that ended his evening early.

Since Orr still plays with the team, I thought I'd offer up a recent clip of him showcasing his bellicose abilities. The videos will be of much poorer quality from here on out, so enjoy this high-def footage.


The Winnipeg Jets' Chris Thorburn gets so outplayed in this fight that he should be renamed "Chris Orr-Burned." 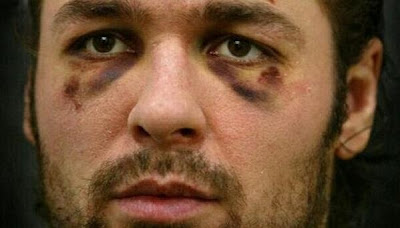 If you think this looks grisly, you should see the fragments of Chris Neil's cheek bones that are permanently lodged in Tucker's knuckles.

On May 13 2013, Darcy Tucker tweeted the above picture on his twitter account to rev up Leafs Nation for the team's first playoff berth since Randy Carlyle was named head coach. (Oh, it was also the first playoff appearance for the team in nearly a decade.)

The picture epitomizes the sacrifices that players have to make in the playoffs, but (given the specific person depicted in this photo), it also reassures Leafs fans that the team will do its best to make opponents look far worse.

There are probably better fighters in Leafs history, but not a single one of them showed as much tenacity and psychotic levels of fearlessness as Darcy Tucker. His style reminds me of my preferred method of playing old Wolfenstein games: I began levels by using the loudest weapon available to alert the Nazis of my presence, and then fought a pitched battle in a corridor for as long as possible. Sure, I often failed missions by taking this approach, but my rampage probably destroyed the computerized Nazi war effort just by making the Third Reich's leaders fear that the Allies would unleash another crazy Canadian upon them.

Some players invite opponents to a fight at the start of the game. These "staged fights" are often derided as an embarrassing sideshow that mars the integrity of the game. Tucker similarly offered up open challenges to opponents, but his challenges were less of a one-on-one invitation and more of an open challenge on which every player on the other team was CC'd. As a result, his fights became one of the main attractions during the Battles of Ontario.

Take, for instance, this clip in which Tucker treats the the Sens bench as an all-you-can-punch buffet.


As Down Goes Brown explains, you should disregard Dean Brown's assessment  of this fight. Brown names the Sens as the victors and tsk-tsks the Leafs because this fight occurred when Toronto's superior truculence deluded commentators into believing that the Sens were honest, peace-loving players who didn't want the Battle of Ontario turned into "a gong show" like those evil, nasty Leafs. Thus Brown had to declare the Sens to be the winners in every fight in order to bolster his rudimentary understanding that good must always triumph over evil.

Aside from the above heroics, Tucker belongs on this list because his fighting spirit lives on even though he retired years ago. (And I don't just mean that he's still on the Leafs' payroll as of this date.)

For Christmas 2011, I bought my girlfriend Heather a Tucker jersey because he is her all-time favourite player. (Yeah, she's awesome like that.) Shortly thereafter, that jersey (and Heather's saucy mockery of the Habs) sparked an altercation in an Ottawa bar that we visited to watch a Leafs game.

Yep, wearing a Tucker jersey isn't just an expression of team pride and fan loyalty: it's a declaration of war on the Leafs' divisional foes.

Yeah I know, my list doesn't include a single centre. But hey, the Leafs have been playing without a legitimate first-line centre for years, so my list at least reflects the team's commitment to overlooking this pivotal position.

Since Clark really needs no introduction, I'll just jump to one of his most ferocious fights. One particularly grainy night in Toronto, Bob Brooke of the Minnesota North Stars foolishly allowed himself to be goaded into a fight. What followed was essentially a re-enactment of that famous scene from A Christmas Story in which Ralphie (Wendel Clark) pummels Scut Farkus (Bob Brooke) until his mother (the ref that night) intervened.

Here's a top-to-bottom comparison of those fights.

It's safe to say that Clark used swear words stronger than "fudge" in this fight.

Despite the lopsidedness of this battle, someone still voted Scut Farkus as the winner at hockeyfights.com.

Here's a more-detailed recap of Clark's fight with Brooke. Unfortunately, sources are uncertain as to whether or not Harold Ballard rewarded Clark's efforts by finally getting his star player the coveted "official Red Ryder carbine action, two-hundred shot range model air rifle with a compass in the stock and this thing which tells time."