With the announcement that Chris Chelios, Scott Niedermayer, and Brendan Shanahan would be inducted into the Hockey Hall of Fame, I thought it was time to release the latest installment in my series that discusses  things that I learned after visiting the HHOF last March.

Here are links to the first and second parts of this series.

This post focuses on perhaps the most cursed relic that I saw while in Toronto. To put that claim in context, let me just say that I also visited the Royal Ontario Museum on the trip and had a chance to see many objects with supernatural associations. For instance, I saw the following reliquaries on display there. 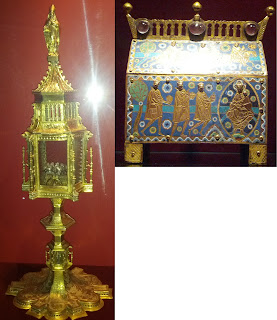 It's my understanding that reliquaries were the late-medieval equivalent of lockets that supposedly contain Elvis' hair.

SIDENOTE: I took over 400 pictures at the ROM, so I basically have a digital archive of all its holdings that were on display in the Winter of 2013. The best surprise at the museum was the unexpected convergence of hockey and history. 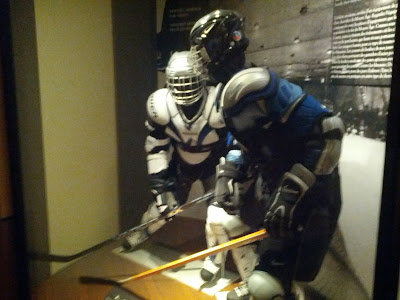 The gallery showing developments in armour ends with the use of protective gear in hockey!

Anyway, let's get back to those reliquaries for a moment. While artefacts containing the body parts of saints might seem especially spooky, they did not cause the hairs at the back of my neck to stand apprehensively as the sight of a now-defunct hockey trophy did.

Behold the Avco World Trophy in all its dreadful glory! Unfortunately, my camera failed to pick up the imps that flew around the display case while spewing fire and singing religious masses in reverse.

Some might wonder just what exactly the Avco World Trophy is let alone why it inspires fear. This award was basically the World Hockey Association's equivalent of the Stanley Cup. It was awarded to the WHA champions from 1973 until 1979 (when the league folded, and a few of its franchises were absorbed into the WHA's main rival--the NHL).


Incidentally, the WHA was way ahead of its time. While NHL teams had not yet begun to advertise on the boards or sell the naming rights of their arenas to corporations, the WHA raised money by selling the name of its highest accolade to The Avco Corporation. The WHA trophy, therefore, prompts the question, "Will one day sell its trophies naming rights and hand its champion the "Canadian Tire/ShamWow Stanley Cup"?

Putting aside the avaricious aspirations of the NHL, let me explain why I believe that the Avco World is cursed. First, have a look at the names of the four teams that had won it:

Three of these teams were absorbed into the NHL, but none of them hoisted the Stanley Cup playing under the name or in the city in which they won the Avco Trophy. The Quebec Nordiques franchise won the cup twice (1996, 2001) as the Colorado Avalance, and the New England Whalers franchise won it once (2006) as the Carolina Hurricanes. The Arizona/Phoenix Coyotes (nee Winnipeg Jets) still haven't won the cup, but based on its colleagues' success, I'd pencil them in as the favourites to win in 2016. That would follow the pattern of the other former WHA franshises winning for the first time in years that end in six (1996, 2006).

So why would the Avco World Trophy be cursed? And why should the curse follow those teams to the NHL after they had endured miserable circumstances in the WHA? After all, these teams teams suffered financial instability, opponents folding midseason, and bouncing paychecks when they were part of professional hockey's renegade league.

Apparently those misfortunes were not enough to atone for the WHA's affront to the hockey gods' favoured trophy--the Stanley Cup.

Disrespecting the cup has caused other curses in the past. Take, for example, the Curse of 1940. That year, the New York Rangers recorded two milestones: they won their third Stanley Cup, and the team's management had finished paying the mortgage on Madison Square Gardens. To celebrate both their NHL championship and newfound financial freedom together, the Rangers burned the mortgage in the cup's bowl. The team would not win the cup again until 1994.

According to hockey lore, the hockey gods made New York's efforts futile as punishment for desecrating the most sacred of sports relics.

If we accept that the Stanley Cup is, indeed, hockey's holy of holies, imagine how WHA teams incensed the hockey gods by hoisting the Avco Cup as though it were as good if not better than the cup. To the hockey gods, the Whalers, Aeros, Nordiques, and Jets were blasphemers who venerated a false idol. While some players on those championship teams were drafted by and only played in the WHA, others were heretics who once tacitly avowed the sanctity of the Stanley Cup by playing in the NHL but later forsook the one true trophy in order to pursue a heathen bauble.

The offence may have been great, but the manner in which the hockey gods avenged those who wronged the cup by blighting hockey markets in Hartford, Quebec City, and Winnipeg (until 2011) would make Medea look merciful in comparison.

What's worse is that the curse attending on the Avco World Trophy may yet take another victim. Take a look at this pic that shows the trophy's left side: 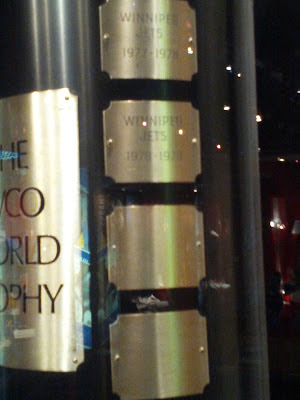 Those empty plates reveal that two more teams may suffer the "Avco Curse" if their names are engraved on the trophy. I wouldn't be surprised if Gary Bettman threatened to etch teams on the trophy in order to intimidate them into accepting his strategy for the 2012-13 lockout. How else can we explain the overwhelming support that he generally received during the fourth-longest work stoppage in the history of North American professional sports?

I imagine that some of you aren't convinced by this evidence. Perhaps those doubtful readers consider the "Avco Curse" or hockey superstitions in general to be ridiculous. To those cynics, I'd like to quote an old saying: "There are no atheists in foxholes."

Sure, the WHA's cursed championship might not threaten any NHL teams at present, but I bet that even the most skeptical fans would become immediate believers in the curse if anything associated with their team were to be placed next to let alone etched on the Avco World Trophy.

Come to think of it, does anyone know if this trophy came into contact with Toronto Maple Leafs paraphernalia at some point? That might explain part of the "Curse of 1967."
Posted by Unknown at 14:51