During this particularly slow week in the NHL off season, Sports Illustrated posted a list of the the 12 greatest hockey commercials. In response, Jason Brough of NBC's prohockeytalk.com quickly posted his own list of the best hockey-themed ads.

Rather than offer another yet another list of bests, I thought I'd look at some of the disturbing implications behind these and other commercials that feature hockey prominently.

1. Bobby Hull is the most terrifying helicopter parent

"Helicopter parents" are guardians who hover about their children and often interfere in their lives outside of the home. I've heard numerous stories from other teaching assistants and profs about such parents who would try to negotiate better marks or special accommodations for their undergraduate offspring.

The worst of these parents is hockey legend Bobby Hull. Well, I'm not sure what he was like as an actual parent, but he plays a menacingly overbearing one on TV.

In this commercial, which I'd like to subtitle "White Snowflake Down," Hull threatens a guy who questions his kid's grammar.

In this commercial, the young boy says that he likes Log Cabin maple syrup because it tastes "not too." That's right; the kid offers only these two words, which do not even form half a sentence since neither is a noun or a verb. Understandably annoyed, the spokesman tries to coax the kid into giving a more complete answer, but the boy only offers roundabout answers. Eventually, the exasperated spokesman (perhaps serving as the film's director) tells the kid to say the following: "Log Cabin is just right."

After pleading with the kid to say the slogan so that they can both move on with their lives, a threatening adult voice interjects and says, "Look, if the kid says 'it's not too,' it's not too." The incredulous spokesman then asks the irate parent just who exactly he is. When Hull clarifies that he plays hockey professionally, the startled spokesman loses his determination to teach the boy how to communicate. Instead, he offers the kid some servile compliments in an effort to avoid receiving an NHL-calibre beating.

So there you have it: anyone who tries to educate Hull's son is asking for a lesson in pain from Hull himself. Unfortunately, we have no idea what became of this kid who couldn't put together so much as half a sentence, but it's safe to say that sooner or later Hull's helicopter approach to parenting caught up with his illiterate child.

Or maybe Hull used such tactics to help the kid through even the highest forms of education: after all, I wouldn't fail this kid if it meant having to fight Hull. 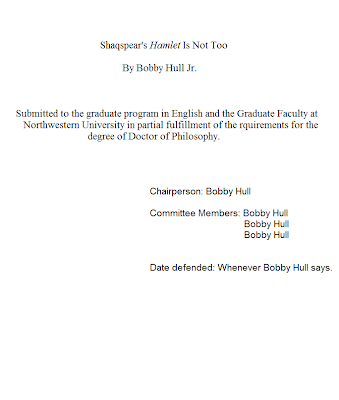 Companies that profit from gambling are already ethically suspect by encouraging what some consider to be a vice, so it's rather alarming that Pro-Line released a commercial that suggests the company operates at an unconscionable level of moral depravity.

In this ad, a group of painted fans celebrate a goal with so much glass-pounding that the barrier itself comes loose and falls onto the players beneath. The players who had been standing before the accident are suddenly forced into being hunched over backwards. Their limbs dangle lifelessly as the stadium becomes suddenly silent with horror.

Well, the arena isn't completely silent: one fan cheers loudly and kisses his Pro-Line ticket. The commercial does not clarify exactly why he's cheering, but we can determine the cause of his joy by assessing the situation.

Before the accident, the home crowd was cheering a goal. By the sounds of their jubilation, this was a significant goal--maybe it tied the game, put the team slightly ahead, or sealed the deal on a close contest.

That goal does not get disallowed due to the accident. There is no reason to believe that the unfortunate incident will cause the home team to lose. Indeed, only a portion of the team was (possibly fatally) injured, so the game could continue and result in the home team winning. While it's possible for the officials to postpone the rest of the match, it's unlikely that they would just hand a victory to the visiting team if (as the crowd suggested) it was a close or blowout game for the home team.

Despite the inconclusiveness of the injury, the gambler is ecstatic: his chants of "yes, yes, yes!" and woohooing of "woohoos" suggest that this accident hasn't just improved his chances of winning; it's created a windfall for him.

Based on this analysis, it seems reasonable to conclude that he bet on this freak injury. It's bad enough for a fan to celebrate a victory if it's predicated on the other team being seriously injured, but it's even worse to think that the bet solely on the likelihood of that accident happening. It makes the fan look bad, but Pro-Line appears even worse.

If Pro-Line had any conscience, this maniac would be in a holding cell rather than an arena. When the company received his call, they should have immediately called the local authorities to inform them that a crazed fan was gambling on the local team getting seriously injured during a game. Instead, they seem content to payout ill-gotten winnings to this sadistic gambler.

If not for any moral reasons, Pro-Line should have refused this bet out of concern for the company's best interests. What kind of gambling company bets against circumstances that the bettor could put into effect? Sure, in this instance it was the painted fans who unintentionally did the gambler's dirty work, but it could just as easily have been the gambler himself interfering with the stanchions to cause the glass to fall on the players.

In the end, Pro-Line's commercial offers a cautionary tale for companies such as...(wait for it)...Pro-Line. The moral is that it's never safe to gamble on the welfare of players by taking a bet from a person who celebrates the injuries of others. (Note that the gambler doesn't even wait to find out if the crushed players are still alive)

3. Canadian Tire will help you exact revenge on those who wronged you

This Canadian Tire commercial shows just how nasty children can be.

Two captains are picking players for an outdoor hockey game. As the number of unpicked players diminishes, so too does Albert's self-confidence. With only Albert left standing, one of the captains thinks over his options carefully before spotting another draft-eligible boy on a picnic table. Albert stands even more alone.

The other captain shrugs his shoulders and establishes that Albert is indeed the last kid available. His opponent states the obvious by responding, "Hey, he's your kid brother: you take him."

But the jerk captain won't pass up the opportunity to let Albert know that he is specifically not picked to be on the jerk's team. Why does this kid need to stress the point that no one wants Albert? Does he hate Albert so much that he can't stand the idea that even the measliest scrap of uncertainty concerning the situation might be useful to Albert? Such uncertainty might have helped Albert mend the tattered pieces of his shredded self confidence so that he could at least appear oblivious to the fact that he's been utterly rejected by both teams.

In actuality, Albert is far too sensitive not to perceive that he's been shunned, but he might have been able to pretend not to know if no one had pointed it out. Instead, the jerk captain leaves Albert no recourse but to recognize and accept the reality of his own wretched state of being both unwanted and utterly alone in the world (well, at least the portion that encompasses the outdoor hockey rink).

Albert's situation is similar to one that occurred during the 2011 NHL All-Star Draft. Before making the second-last pick in the draft, Eric Staal took the opportunity to sneer at the Leafs and their star player Phil Kessel in order to make it clear that he wasn't just selecting Paul Stastny with his final pick: he was specifically not picking Kessel.

Unfortunately for Albert, James Duthie was not on hand to hand him the keys to a new car as a consolation prize for being picked last.

As though it wasn't bad enough that the jerk captain went out of his way to stomp on poor Albert’s self-esteem, Albert’s own family abandons him. His brother only picks Albert when the jerk captain insists that he do so out of familial obligation. The brother might as well have said to Albert, “Ugh, fine--having you screw up my bottom six is better than getting in trouble when mom finds out that I made you sit on a cold bench and cry frozen tears until you were waist-deep in a self-wept snowbank of woe.”

It's hard to believe it, but Albert’s brother is a bigger jerk than the jerk captain. And why is that? Don't elementary schools teach kids about The Godfather anymore? Michael risked the family business by starting a feud with Moe Greene in order to repay Greene's disrespectful treatment of Fredo and, by extension, the Corleone family itself. Sure, Albert's a bit of a mopey lump, but he's no worse than Fredo and, therefore, no less deserving of fraternal protection.

Now I'm not saying that older brother should whack the other captain or even send him a horse's head. Simple hockey justice (such as jerseying and knocking the jerk down) would do.

Luckily for Albert, Canadian Tire was there to pick up the shards of his shattered self-esteem and piece them together again by outfitting him in the best hockey equipment that money can buy. In doing so, they helped him develop into a professional player. As the commercial nears the end, we see a guy presumably playing in the NHL with “Albert” emblazoned on the back of his jersey.

However, this touching ending only makes poor Albert’s life that much worse. Apparently the brother captain had such a loathing for his sibling that he, like the other kids, only called him by his surname. Can you imagine calling your sibling only by your shared surname? That's basically telling the little kid, "Respect for our family is the only reason that I acknowledge your stupid, useless, poor-hockey-playing existence."

If living well is the best revenge, then this commercial is the hockey equivalent of Kill Bill volumes 1 and 2. Personally, I hope Albert got back at his brother the Alexander Ovechkin way: by using room service as an economic weapon.