A Crease of Their Own: The Luongo-Schneider Goaltending Controversy

The conclusion of the goaltending controversy that has plauged Roberto Luongo, Cory Schneider, and the rest of the Vancouver Canucks since the 2012 playoffs bears a striking resemblance to events from the movie A League of Their Own (1992).

A League of Their Own was Hollywood's homage to the All-American Girls Professional Baseball League that was started in 1943 when the MLB's ranks dwindled as more and more players enlisted in the Second World War. Aside from the antics of Tom Hanks and the sarcastic rejoinders of Jon Lovitz, the film is like a Norman Rockwell painting in motion. 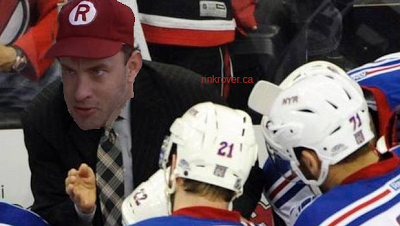 "When I played for the Colorado Rockies, my coach told me that the team might as well have drafted me to play as another guy's jockstrap because I had hands like bricks and I skated in cement, but did I cry? No! Because there's no crying in hockey!"

The movie does, however, offer some interesting dramatizations of in-fighting among teammates. The most prominent instance happens when Dottie (Geena Davis) recommends that Kit, Dottie's own sister (played by Lori Petty), be pulled from a game. Dottie argues that Kit isn't playing well that day, and Kit retorts by attacking her sister in the dugout. If the New York Yankees had adopted this approach to handling personnel, we'd be watching A-Rod spitting out his own teeth rather than heaps of sunflower seeds during the 2012 MLB Playoffs.

Dottie, who reluctantly agreed to play baseball professionally and later became an all-star caliber player, tries to resolve the situation by removing herself from it. She tells Ira Lowenstein, the AAGPBL's general manager, that she intends to quit. Knowing that Dottie's fame has staved off the undervalued league from being discontinued, Lowenstein convinces her instead to request a trade in order to give Kit, the more ambitious player, some space.

That request backfired in more ways than one. After shrewdly assessing the situation and realizing that Dottie was more valuable to her team than Kit, Lowenstein traded the latter behind the former's back. This betrayal turned Kit from a sister-beater into a general menace: she vandalized the club's rooming house, stole property belonging to the team, and shrieked at her former teammates over the injustice of the situation. Only the opportunity to accuse her sister of sabotaging her career could calm Kit down enough to depart peacefully but nonetheless vengefully.

Cut to 69 real-world years later when a similar controversy began after Roberto Luongo was pulled from a playoff match-up against the Los Angeles Kings after LA took a 2-0 series lead. Assuming that his days as the Canucks' #1 goalie had come to an end, Luongo requested a trade so that he could pursue being a starter somewhere else. Just over a year after he was benched in favour of Schneider, Luongo was informed that his new starting gig would be his old post in Vancouver.

In contrast, the conflict in A League of Their Own was resolved in less than a half hour in real time and less than a week in the world of the movie. While Hollywood is particularly adept at introducing and resolving conflicts in a timely (although often generically-strained) manner, it seems like the Canucks could have ended this controversy almost as soon as it began by trading Schneider, retaining Luongo, and promoting Eddie Lack to backup duties. Schneider's value was never higher than after the 2011-12 season, and it didn't seem like trading Luongo would fetch much in return.

Of course, it's much easier to gamble with the future of a franchise when it's fictional or when you're acting as an armchair GM. Both Luongo and Schneider are great goaltenders, so Gillis couldn't have resolved the problem with having two starting goaltenders with as much ease as Lowenstein solved the Dottie-Kit debacle. Only time will tell if the Canucks made the best decision by trading Schneider rather than Luongo, but even that judgment based on hindsight will be clouded by the protracted controversy that overcast Vancouver's 2012-13 season.

The characters in Vancouver's hockey drama are also far more complex than the personas who brought a sisterly rivalry into the AAGPBL. I won't address Gillis' culpability in this conflict because many people have already singled him out as the most blameworthy figure. However, it's important to keep in mind that Luongo put Gillis in a poor position by first forcing and then tipping Gillis' hand.

Luongo saw the end of his tenure in Vancouver approaching and decided that he would not go gently into that good night. In some ways, Luongo did Gillis a favour when he asked for a trade during the end-of-season interviews following the team's elimination from the 2012 playoffs. Gillis hoped to keep Schneider, so he would have had to bring up the awkward request for Luongo to waive his no-trade clause at some point. By asking for a trade, Luongo deflated some tension in the organization.

Yet by requesting a ticket out of town, Luongo also made it known to the NHL's other GMs that an All-Star goalie could be had for less than market value because he was disgruntled. If Luongo and Gillis had teamed up to make the situation appear as though Vancouver had to pry one of their goalies away from the crease despite their willingness (out of an undying love for the city, the team, and the fans) to play backup if asked, then suitors for Luongo might have made better trade proposals.

Of course it's not just Luongo's unhappiness that diminished his trade value. The big issue, as everyone knows, was Luongo's contract. Now as much as it's the fault of Gillis, Luongo, and Roberto's agent Gilles Lupin for creating a costly contract, it's still a terrible situation for Lu. While he'll be rich whether he plays or not, it must feel terrible to be a burden to your own team and be unable to play for another (despite being able to help out most team in the NHL) because of a disastrous deal.

Still, Luongo didn't help out his team or himself when he discussed his contract at the 2012 trade deadline. At the time, I found Luongo's candor refreshing: unlike players who respond roboticallly with answers learned by rote, Luongo refused to countenance the controversy and instead cut to the rotten core of the situation when he explained that he hadn't been traded because, his "contract sucks."

For me, Luongo's candid response made him a sympathetic figure. For others, the unadorned answer made great television. For Luongo himself and the Canucks, it did little to improve the problem. I'm not faulting Luongo personally for what he said, but we should note that his comments exacerbated the situation. By asking for a trade, Luongo put Gillis in a corner. By disparaging his contract, he metaphorically bayoneted trade talks in the foot.

Trying to perform damage control, Gillis characterized Luongo's comments as spoken out of emotional distress and not reflective of how Roberto actually felt toward his contract. Riiiiight.

No one was buying that explanation. What Luongo said was the (albeit uncouth) truth behind the matter, and GMs knew it. The statement further tipped the balance in Gillis disfavour by giving would-be trading partners a pithy soundbite with which to justify offering slim returns for Luongo. Since the GMs can quote Luongo asserting that his contract sucked for him, his teammates, and his organization as a whole, why would they give up anything to take on such a sucky deal?

Like Luongo, Schneider's success makes him both a victim and culprit in this situation. Luongo didn't get signed to a monstrous deal because he blackmailed management with pictures of David Booth killing endangered species (although based on Booth's unabashed enthusiasm for hunting, I wouldn't be surprised if some exist). No, Luongo deserved a hefty contract because he's a star player. Similarly, Schneider deserved a promotion as an emerging star. While I haven't read that Schneider plotted to oust Luongo from the crease, he didn't seem opposed to unseating the team's #1 netminder when it happened.

Should Schneider have been less willing to seize that decapitated crown? Maybe, but it's unreasonable to expect as much in professional sports. If a guy doesn't have the competitiveness to capitalize on an opportunity when it presents itself, he probably doesn't have the drive to become a starting goaltender in the NHL. To borrow a phrase from Thomas Hobbes, the life of a goaltender is often "nasty, brutish and short" as there are always others waiting offstage for their chance to get bumped up from understudy to main cast.

Will there be a happy ending to this affair? According to Hollywood, we'll likely see Luongo and Schneider square off against each other in next year's Stanley Cup Final. Luongo will teach his teammates about Schneider's weaknesses, but Schneider will somehow manage to overcome them and beat Luongo. That's how I expect things to end based on expectations created by the plot in A League of Their Own.

Such an ending would vindicate both goalies. No one could question if either deserved to be a starter if they both backstop their teams to the Final less than five years after each franchise saw the cup plucked from its grasp (the Canucks were eliminated in 2011 by the championship Boston Bruins, and the LA Kings eliminated the New Jersey Devils in 2012). After that victory, Schneider and Luongo would drift apart until finally getting back together to rehash old times when they're inducted to the Hockey Hall of Fame in the same year.

To claim the exclusive right to film these events, I've prepared the following poster to promote it as a major Hollywood movie. 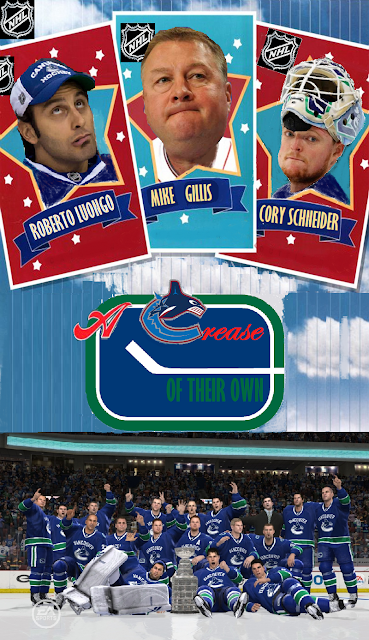 To pay respect to the original movie, I'm willing to cast Madonna as Kevin Bieksa and Rosie O'Donnel as John Tortorella.

That ending would certainly be cinematically pleasing, but it's probably more likely that Schneider will just seek petty revenge by assaulting Luongo (Jeff-Gillooly style). He's done it before, and I'm sure he'll try it again!
Posted by Unknown at 17:19