Let's start off by making one thing clear: the NHL, the New Jersey Devils, and Ilya Kovalchuk himself are using a euphemism to describe the star forward's obvious betrayal. A person doesn't retire at 30 to perform the exact same job for a rival league.

Darth Vader, for instance, didn't retire from being a Sith Lord in order to make the Rebel Alliance into a father-and-son operation. He picked up Emperor Palpatine and tossed him down a shaft in an act of treasonous insubordination.

What word best describes Ilya's actions? Some writers, including myself on twitter, have used the term "defection." That word might seem a bit much since other famous athletes who have defected include Mikhail Baryshnikov, who went AWOL from the USSR and joined the Royal Winnipeg Ballet in 1974.

According to Merriam-Webster's online dictionary, "defect" can refer to a person quitting one job to take a position with the former company's rival, or leaving one political party to join another. The NHL is somewhere between a job and a political party as it makes superstar players such as Kovalchuk into celebrities, and it has distinct, ideological business practices (e.g. the salary cap, the promotion of parity among teams, conventions of free agency) that distinguish it from other leagues such as the KHL.

Based on this definition, it's safe to say that Kovalchuk has indeed defected to the KHL. In so doing, he's provided future hockey historians with the opening salvo in what is already shaping up to be a Cold War between these two professional hockey leagues.

It's anyone's guess how the NHL will retaliate. Will they try to lure KHL stars to North America? Perhaps not just yet as the NHL currently has most of the best players in the world already in its ranks.

Maybe the NHL will take a page There Will Be Blood and siphon all the vodka out of Russia via an intricate network of pipelines. This plan, of course, might backfire if (as I've long suspected) Valdimir Lenin is sleeping in his mausoleum located in Red Square until a time when his country needs him most. Stealing the nation's entire supply of vodka might be a cause worthy enough for zombie Lenin to avenge.

Referring to Kovalchuk's defection as his "retirement from the NHL" is especially absurd when you consider the status of other players. Kovalchuk is 30 years old; he played 37 out of a possible 48 games in the NHL last season; and he scored a total of 31 points.

In contrast, Chris Pronger is 38 years old; he has played 11 games in the last two years; and he seems unlikely to play again after suffering a severe concussion in 2011. Although he's been on the Injured Reserve List for over a year now, Pronger is still technically a current NHL player.

So at the relatively dewy age of 30, Kovalchuk has decided to pull up his pants, shout at kids playing on his lawn, and declare himself a senior citizen in the NHL whereas Pronger remains in the game (albeit in one of the most reduced roles possible) because he insists that his career is not yet over. 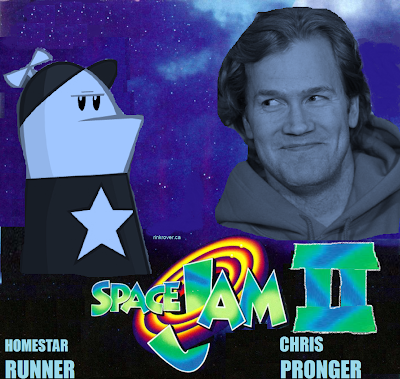 Of course, I've also heard that Pronger is playing hockey for charity that prevents cartoons from being enslaved by aliens.

So, given that it's more typical for players to put off retirement as long as possible rather than call it quits prematurely on a hall-of-fame caliber career, it seems that Kovalchuk didn't really retire: rather, he quit the NHL or dumped the Devils.

3. Hell Hath No Fury Like a Hockey League Scorned

Okay, here's my last point as to why we shouldn't refer to this incident as Kovalchuk's retirement. Following the announcement that Kovalchuk would be spending his golden years in sunny St. Petersburg, the NHL and the New Jersey Devils presented this decision as an amicable split. Their efforts were aided by professional hockey commentators, such as Bob McKenzie and Tom Gulitti, who pointed out how both sides benefit from this divorce.

That's the story given to the public, but another one has unfolded behind the scenes. Shortly after the announcement of their star forward's departure, the Devils hastily deleted Kovalchuk from their roster. That move, of course, needed to be made at some point before the start of next season, but doing it immediately after Kovalchuk's announcement makes the Devils look supremely miffed.

Even when people get dumped on Facebook, the dumpees doesn't usually unfriend the dumpers for at least a few days so as to make it look like they're not seething with jealousy when the cads that dumped them insensitively update their relationship statuses before the one-sided tears cried over this breakup have even dried.

What's worse, the NHL has removed Kovalchuk's stats from its website. There are still player profiles available for retired stars such as Mats Sundin and Eric Lindros. The profile is even still available for scrappy fan favourite Darcy Tucker, but Kovalchuk's mugshot and stats have been removed.

Some might see the NHL's suppression of Kovalchuk's involvement with the league as the actions of a dystopian organization that intends to erase the memory of a friend turned foe. However, I think it's more accurate to liken these actions to a scorned lover trying to move on with his or her life by forgetting a former mate. As in the movie Eternal Sunshine of the Spotless Mind, the NHL is trying to overcome heartbreak by using technology to remove its memory of that untrue partner. 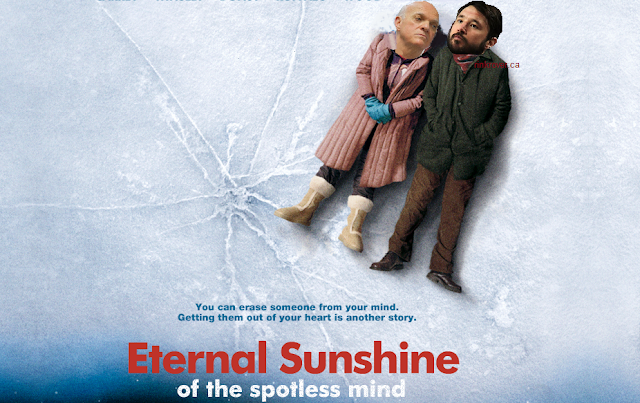 If Lou Lamoriello ever asks who's responsible for this pic, tell him @strombone1 did it.

While the NHL might be able to suppress its memories of Kovalchuk, it will be much harder for the New Jersey Devils to forget because they will cost them dearly in the short and long term.

Sure, they no longer have to pay their former forward the $77 million owed to him over the final dozen years of his terminated contract. However, the loss of Kovalchuk won't bring back the first-round pick surrendered as punishment for the way in which they acquired Ilya in the first place.

To punish New Jersey for crafting a contract for Kovalchuk that circumvented the salary cap, the NHL ordered the Devils to give up a first-round pick. Kovalchuk's departure hasn't changed anything: the Devils will still lose that pick in the 2014 draft. In case you haven't noticed, the Devils are in desperate need of a rebuild given that their core is aging and their shallow prospect pool makes the Sahara Desert look like the setting of Waterworld.

But wait, there's more! The Devils' salary cap will take, at the very least, a $250 000 hit per year for the remainder of Kovalchuk's contract length as a penalty for the early termination of his deal. That penalty only amounts to $3 million total over the next dozen years, so it isn't exactly going to restrict New Jersey's ability to build competitive teams. It will, however, serve as a nagging reminder of that awful break up.

Imagine getting married to a person that you predict will be an All-Star spouse for years to come. You both know that love might not last forever, but you still agreed to give your marriage at least 17 years. After 3 years, your spouse wants a divorce. Despite the amicable nature of the separation, you still have to sleep on your side of the bed and keep your clothes on your side of the closet for the next 12 years. That frustrating living situation is pretty much what the Devils will be going through in the post-Kovalchuk era.

Even though the residual cap hit from Kovalcuk's contract won't handcuff the team from making major moves, it'll nevertheless become a source of frustration and embarrassment. If you don't believe me, just ask fans how they feel about Colby Armstrong's and Darcy Tucker's contracts diminishing the Leafs' cap space.

Given how Kovalchuk will torment the Devils and their fans over the next dozen years, I assume certain filmmakers are kicking themselves for not basing the latest installment of the Child's Play franchise on Ilya. 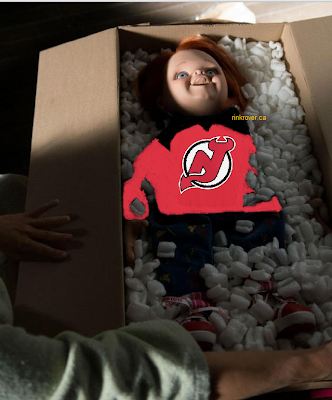 Suggested poster for The Curse of Kovalchuky.

5. Busting Out a New Record

Kovalchuk's contract, however, seems worse than all the others on the list considering that he only played three years of it. That's significantly less time than everyone else from the list put toward fulfilling the term of their lengthy deals.

Still, it might not be the worst bust on that list of longest contracts considering that Rick "Milbury's Doughboy" DiPietro had the third longest deal in sports history. In order to determine which pact was the greater failure, you'll have to choose between quantity and quality. DiPietro "played" more games for the New York Islanders than Kovalchuk did for the Devils, but Kovalchuk offered a much better performance even in his limited engagement.

Kovalchuk's contract began in 2010 and was originally intended to last until the 2026-27 season. To get a glimpse of what filmmakers thought the world would look like in the year Kovalchuk's contract ended, seee Fritz Lang's Metropolis (set in 2026).

Kovalchuk's abrupt resignation from the NHL has caused many to wonder if we might see more hockey players seek employment outside of North America. While it wouldn't be surprising to see Russian prospects getting snubbed more often in future NHL Entry Drafts, it's tough to say at this point if we'll see Canadian and American players of Kovalchuk's quality choose the KHL over the NHL in the future.

Some people are even wondering what Kovalchuk's departure might mean for disgruntled Vancouver Canucks goaltender Roberto Luongo. Will he seize this opportunity to start anew in a league in which there are no Chicago Blackhawks, Boston Bruins, or LA Kings to ruin his dreams of winning a championship?

Bob McKenzie weighed in on this matter yesterday via twitter:

Wait, is he talking about a different Luongo? Could he actually be referring to the same Lu who famously said that his "contract sucks," and that he'd "scrap it if [he] could right now" following the 2013 trade deadline?

If Lu truly wanted to be freed of his millstone-like contract, should he consider playing elsewhere? It's probably unreasonable to expect a player to uproot himself and, in the process, cause an even bigger controversy than the one he's trying to escape by jumping leagues when his request to change teams fell through. However, I'm sure some embittered fans might be even more hostile toward Luongo for not standing by his claim that he'd destroy his contract if he could. Will his decision to stay in the NHL verify claims that he wept crocodile tears when he lamented his disastrous contract last April?

While I certainly don't expect Luongo to leave the NHL, I'd have to say that such a move wouldn't catch me completely off-guard given the circumstances. Indeed, until yesterday, I would have thought Lu more likely to leave the league than Kovalchuk.

Even so, there's still time for Lu to join Kovalchuk in St. Petersburg. While that scenario seems highly improbable, that doesn't mean it won't happen. After all, in an offseason in which Daniel Alfredsson stood up the Ottawa Senators during Free Agency Frenzy and joined the Sens' new divisional rival, it seems that anything is possible.
Posted by Unknown at 00:00