The Complacency Theory: 5 Reasons Why the Leafs Couldn't Fake not Making It

WARNING: I am writing as a Leafs apologist, but I'll add in some digs against the team in case you're a Sens or Habs fan! For my previous blog on conspiracy theories and the Leafs, click here.

I'm writing in response to Nate Silver's excellent post for the New York Times. Silver discusses a variety of reasons that may explain why no Canadian team has won the Stanley Cup since 1993.

Among other possibilities, the idea of complacency is kicked around. To clarify, Silver himself doesn't accuse Canadian teams of being too comfortable with their proceeds from regular season and brief playoff appearances to invest in competing for the cup; he merely acknowledges that some uphold such a theory.

People less generous than Silver often argue that the Leafs' management is happy to exploit the team's devoted fanbase by charging outrageous prices for merchandise and regular season tickets (as well as jacking up prices in preparation for the team's first playoff appearance since the 2004-05 lockout). In exchange for their loyalty, fans get mediocre lineups that repeatedly inflate and then burst expectations.

This post will tackle this issue by providing 5 reasons why this popular conspiracy theory doesn't make sense.

1. The absurd basis of this conspiracy

The foremost problem with this "conspiracy" is that it's unclear exactly who is behind it. Was it a scheme developed by the Ontario Teachers' Pension Plan and inherited by media conglomerates Bell and Rogers? Is Tim Leiweke--by all accounts a competitive, win-oriented guy--in on the scam now? If so, how much did the heads of Maple Leafs Sports & Entertainment have to pay him to make up for the time he's about to waste on ensuring that the Leafs remain profitably mediocre?

As the above paragraph tries to establish, it seems that this is a conspiracy that the powers-that-be in MLSE don't seem to know about. If they did, why would they (as Silver notes) hire more scouts on average than most NHL teams? Wouldn't they reap more profits by having a smaller staff, or do they need a large staff to pull off this charade?

If they do need a large cast of characters to pull off the conspiracy, they certainly aren't informing them of the plan. As "Leap Year," Ken Campbell's article on Nazem Kadri from The Hockey News (issue 66.23), illustrates, people behind the Leafs' development such as Dallas Eakins are thoroughly engrossed in improving the club.

Dallas Eakins apparently actually lost sleep due to his frustration with problems in Nazem Kadri's development. He tried a number of tactics before resolving to involve Kadri's father in calling out the oft-unfocused centre in order to make him work on his game. 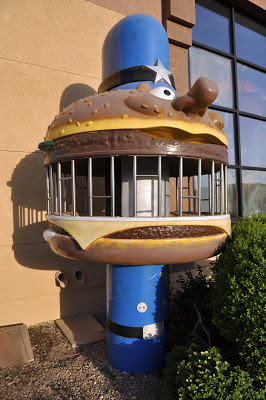 I heard that they resorted to confining Kadri in Constable BigMac's detention centre for weeks before #43 would agree to cur the junk food out of his diet.

Of course, we might attribute Eakins' recent departure to him finally figuring out that the Leafs had no intention of trying to compete--a realization that he may have come to after Jake Gardiner was essentially turned into a yo-yo by being sent down to and recalled from the AHL repeatedly in 2013.

However, even taking the arguably mismanagement of star players into account, it still seems unlikely that MLSE could or would even want to put so much effort into acquiring and deceiving an impressive list of hockey personnel rather than do the significantly more straightforward and less insane plan to assemble an actual cup contender. I'm not saying that doing so would be easy, but it's certainly less problematic and downright insane than orchestrating an ongoing scam on Leafs Nation.

Or perhaps the Leafs, following their last championship in 1967, saw The Producers when it debuted in 1968 and have used that movie as a business model ever since.

If any team is likely to be complacent, it's the Detroit Red Wings, who have made the playoffs for over two consecutive decades now and have reaped more than a few Stanley Cups in that time.

Carl von Clausewitz once wrote that it's easier to rally a defeated (but not obliterated) army than a victorious one. Well, the major exception to this rule seems to be the Red Wings: this team seems to have an esprit du corps that cannot be satiated with success. Indeed, at this point it seems that the team isn't as concerned with winning cups as it is with maintaining its incredible streak of playoff appearances.

So how does an organization that hasn't had a top-ten draft pick in more than 20 years stay competitive? Is there a conspiracy working in Detroit's favour?

It's more likely that the Red Wings succeeded by focusing on developing organizational strengths such as a strong network of scouts, a successful farm system, and an excellent player development program. These are, coincidentally, aspects of cultivating a championship-caliber franchise that the Leafs neglected prior to and following the introduction of the salary-cap era.

So, when you compare the Leafs and Red Wings, it seems like it would take a conspiracy to make Toronto's team successful despite its poor management while keeping Detroit from succeeding.

3. The big money is in the playoffs

As Silver and others have noted, MLSE didn't hesitate to raise ticket prices to staggering new levels when the Leafs finally ended their playoff drought in 2013.

Sure, as Morgan Campbell of The Star writes, these revenues won't make MLSE (already a billion-dollar franchise) reach new pinnacles of profit, but the money certainly isn't anything to scoff at. Sure, the Leafs have proven that they don't need to ice a winner in order to sustain a wide and highly-profitable fanbase, but that doesn't mean they are indifferent to success.

Indeed, success might not be entirely up to them. As Morgan Campbell notes (and Ken Campbell would later discuss in issue #66.25 of The Hockey News) almost everyone stands to profit from the Leafs being in the playoffs. While fans revel in their team playing in slightly warmer weather than they have in recent memory, local Toronto businesses, television networks, and the NHL itself reap huge profits from the most affluent hockey franchise's success.

Therefore, it seems far more likely that there would be conspiracy theories to get the Leafs into the playoffs each year. After all, a battle between the Leafs and Blackhawks for the Stanley Cup would be much more profitable than a contest between the Carolina Hurricanes and Dallas Stars.

I know; I know. This ridiculous conspiracy hinges on the assumption that the NHL would compromise the integrity of hockey just to improve its own business, and that the City of Toronto's municipal government would be corrupt enough to perpetrate such a scheme. Still, suspend your disbelief a moment and consider the possibility that these two ethical exemplars might compromise their ideals to make a profit. It could happen. 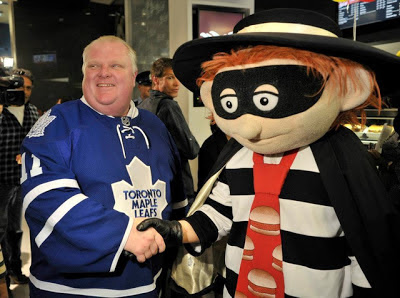 Pictured above: An indisputable embodiment of integrity.
(source)

4. MLSE's true marketing might will be revealed when the Leafs win something

I say "something" because it might not take winning the Stanley Cup to open the wallets of Leafs Nation even wider. A President's Trophy, Divisional Championship, or even a Lady Byng award might do.

For instance, think of the action figures that could be released. You've probably seen the toys of Leafs' greats and current star players. I'm sure that MLSE makes some money off of these figures, but they could make much more by releasing a special line of "Cup Champion Collectibles."

These figures would include every member of the Leafs roster in all three jerseys worn during games as well as their various practice jerseys: that's nearly 200 toys right there!

On top of that, you could add other figures such as

1. "Press Conference Dave Nonis (complete with lever that lets him drop the mic)"
2. "Trade Deadline Dave Nonis (smart phone sold separately)"
3. "Pre-Game Presser Randy Carlyle" and "Post-Game Presser Randy Carlyle (the only difference is that the latter toy has a much more exasperated expression and comes with a bottle of water),"
4. "Leafs Practice Randy Carlyle (same as the other two but with an angrier expression)"
5. A talking Bleacher Creature Randy Carlyle that says some of his best soundbites! (e.g. speculation on how helmets cause concussions)
6. "Offseason Adventure Lupul (modeled after a Ken doll and packaged with "Puck Bunny Barbie"). 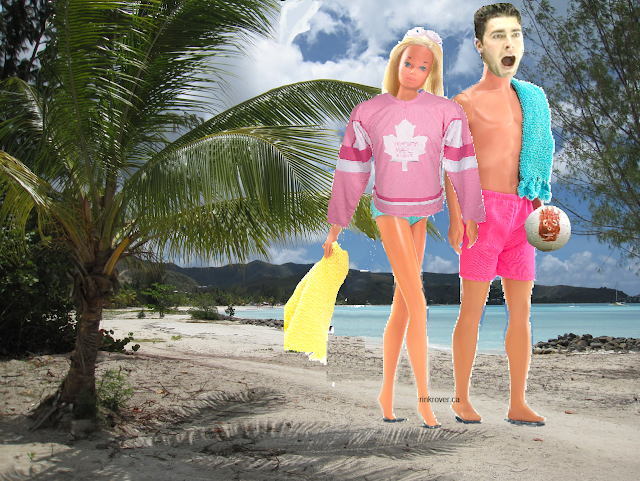 And if these products don't exhaust the fanbase's willingness to spend, MLSE could always team up with DIsney and release a line of Star Wars figures wearing Leafs jerseys.

Conspiracy theories should probably be classified as a type of psychological security blanket for people who don't understand why bad things happen to beloved teams. Most people that I've spoken to about this conspiracy are jaded Leafs fans or Sens fans who became Ottawa supporters after growing tired of being jaded Leafs fans.

These fans are like movie buffs who attribute an actor doing a terrible movie to some favour owed to a producer or director. I'm not aware of any specific instances in which someone has appeared in a terrible movie in order to settle some sort of debt, but I wouldn't be surprised if it happened at some point.

I'm not one to check the "Special Thanks" list that appears toward the end of movies, but I'd expect to see the following listed in the credits for Gigli: "Special Thanks to the Cast's Gambling Problems: This film wouldn't have been made without them!"

However, it seems likely that more often than not, actors simply misinterpret the significance of an upcoming film. Dakota Fanning, for instance, once explained her decision to appear in the awful film adaptation of The Cat in the Hat by saying, "In my defense, when I read that script I saw it as a metaphor for ethnic violence in Central Africa! But apparently it was about a cat in a hat!" 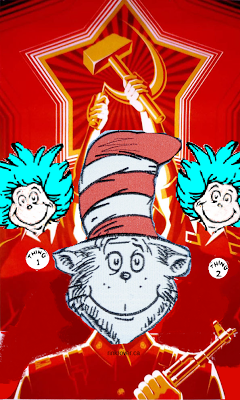 It's long been this blogger's opinion that The Cat in the Hat is actually an allegory of the Russian Revolution and the eventual dissolution of the Soviet Union.

Okay, the above quote may have actually come from Amy Poehler's impersonation of Dakota Fanning in the recurring SNL sketch "The Dakota Fanning Show." The point remains that people in the entertainment industry often make poor choices that we try to rationalize based on them being beholden to others or just needing a paycheck.

This understanding also applies to the Leafs. It seems more likely that the team was terrible for the better part of a decade on account of incompetence and unplanned mismanagement rather than managerial machinations. Brian Burke, for instance, seems to have genuinely believed in 2009 that the Leafs were only a Phil Kessel and Francois Beauchemin away from being playoff contenders.

I'm not faulting Burke entirely for this problem, but it certainly shows that the organization was dysfunctional and even somewhat delusional about its ability to compete with the rest of the league.

So the bright side is that the future is looking brighter for the Leafs and, by extension, their fans. If fans relied on conspiracy theories to get through some dark days between 2004 and 2013, I don't blame them as those were some rough times. Hopefully those days are behind us, and we can look forward to future, merited success achieved by drafting quality players and developing them into skilled NHLers.

On the other hand, this entire blog may have just lowered the well-wrought defence mechanisms of Leafs Nation, rendering the fanbase susceptible to implosion should the Leafs offer up another unmitigated collapse in a game 7 during the 2014 playoffs.

Well, if the latter happens, I blame the Cat in the Hat for imposing a pseudo-communistic salary cap that was designed for no other reason but to ruin the Leafs and demoralize the best fans in pro sports!
Posted by Unknown at 19:37