Mandatory visors will ruin the NHL as we know it

On Tuesday, it was announced that the use of visors would soon be mandatory for NHL players. Naturally, reactions from fans were polarized and impassioned: some saw this move as an end to the league's haphazard treatment of its personnel while others took to twitter, facebook, and other social media to decry what they saw as the "wussification" of hockey.

In light of this event and the debate surrounding it, I've prepared a list of the ways in which the imposition of mandatory visors will ruin professional hockey.

Things are about to get worse for fans who hate long pauses between whistles: mandatory visors will make such stoppages more frequent and longer lasting. After every goal, save, deflection out-of-play, etcetera, fans brandishing squeegees will charge the ice and solicit money for their efforts to give each player's face shield a quick wipe down.

Until the economy improves or the NHL lowers ticket prices in every market, it's likely that squeegee fans will remain as much a staple of the sport as the mandatory visors.

Even lengthier delays will result from officials having to clear debris from the playing surface repeatedly during games. This problem won't stem from fans hurling octopi or plastic rats after their teams scores but a byproduct of making face shields mandatory. Birds will occasionally fly into players' visors and leave behind (depending on the severity of the impact) a dust devil of down feathers or the exploded remains of the anarchic aviators.

In worst-case scenarios, these birds will cause a spike in the number of concussions per season as the force of impact with players' face shields can potentially cause whiplash and trauma to the brain.

Some say that this outcome is unlikely since birds only fly into windows because they can't see the glass, but I've long maintained that birds are just jerks who are willing to lose their own lives just to ruin a person's day (literally) in one fell swoop. I guess we'll find out once the entire league plays with visors.

Instead of face washing, the new way to mess with an opponent during a scrum will be to breathe on his visor and then write something offensive once the fogged-up face shield.

Here's how I project Patrick Kane will appear after a scrum. 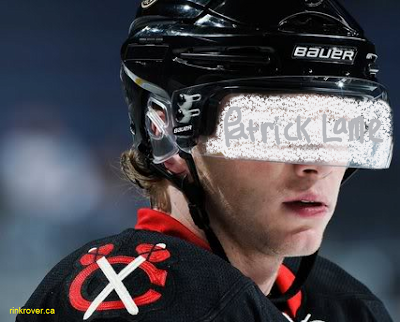 "Patrick Lame" might not be the greatest burn in the history of trash talk, but it'll simply have to do given the little time and space with which to scrawl an insult on an opponent's visor.

Even teammates might start pranking each other by writing things on visors. Indeed, I think that most of us would find it hard to resist the temptation to write something on a particularly dirty face shield. Here's an example of Alexander Ovechkin becoming the victim of one such prank. 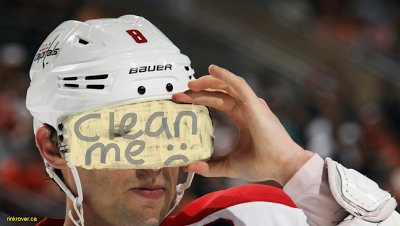 Teams will be forced to play poor performers

Earlier this year, Mike Komisarek broke his stick while having a fit on the ice and got a piece of the shattered shaft stuck in his eye. (Here's the full story.)

This incident gave the Toronto Maple Leafs the opportunity to bench the overpaid defenceman. He never saw minutes in the NHL afterward (not because of blindness; he was demoted to the AHL).

With visors in place, teams won't have such convenient ways to remove an underperforming player from the lineup, and then casually stash them later on in the American league.

With the entire league wearing face shields, many players will feel the need (as goalies did decades before them) to customize their visors in order to make them stand out on the ice.

Here are a few possible visor modifications that we may soon see. 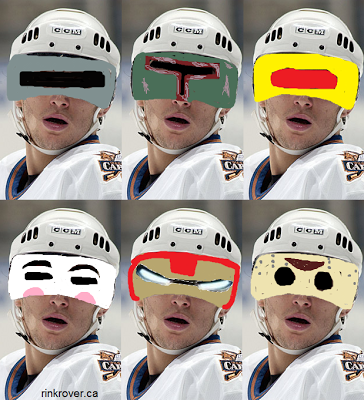 Top left to right: Robocop, Boba Fett, and Cyclops from X-Men comics.
Bottom left to right: V from V for Vendetta, Ironman, and Jason Voorhees from the Friday 13th franchise (the last one is perhaps the most meta as it replicates the old-school, un-customized goalie mask).

Players who don't want to have their visor painted to make it stand out will likely indulge themselves instead in promoting themselves by posting their twitter handles or hashtags that they want associated with themselves on their masks.

It won't, however, take long for advertisers to realize that the face shield is their newest medium for pushing products.

The first wave of ads incorporated into visors will probably try to be clever. I could see a marketing campaign for a popular American beer using the slogan "BudVisor."

After that, however, companies will soon abandon clever ways to justify encroaching on the visages of famous players and just offer big payouts to players willing to have a corporation's logo slapped on their face shields. 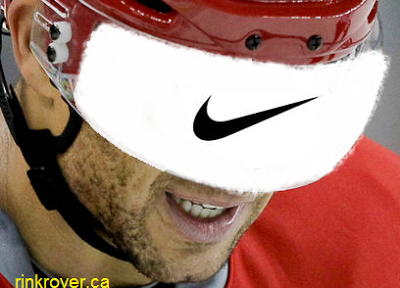 Even the best players will begin to under-perform

I predict that almost everyone's on-ice performance will diminish in quality because mandatory visors will offer distractions for players. It's not that the extra equipment itself will make players unable to concentrate; rather, it's the temptation to insert Google Glasses into the visors so that players can entertain themselves while sitting on the bench between shifts.

This might not seem like a big deal at first, but it's a gateway habit that leads to getting hooked on more serious forms of slacking.

How many times have you taken a moment at work to play a quick game of solitaire only to find yourself engrossed for hours in a winning or losing streak?

With mandatory visors in place, we won't be able to tell for certain if a player shot the puck wide of the net because he genuinely missed, or if he was distracted by prompts to raise the bet on the game of Texas Hold 'Em being played within his helmet.

Visors will allow goons to thrive once again

Once Google Glasses have been widely incorporated into hockey visors, it won't be long before players begin to add more technologies that will offer increasingly sophisticated applications.

One especially dangerous app that I imagine will become quite popular with NHL enforcers will be the Terminator app.

This add-on will allow goons to see the ice as though they were the Terminator. It will enable them to identify key targets on the opposing team, quickly access their physical stats, and hone in on key areas that are prone to imagery.

Here's what Sidney Crosby would look like when viewed through this particularly dangerous visor add-on. 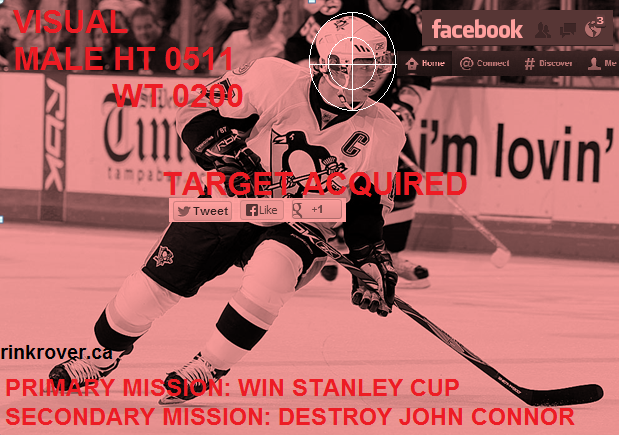 As you can see, the common practice of concealing injuries and declining to discuss details surrounding them until the offseason will be obsolete. Enemy players will effortlessly be able to scan their opponents' stars to determine their greatest vulnerabilities. With this technology in place, the game will truly devolve into a state of total war reminiscent of Thomas Hobbes' Leviathan.

Our only hope to prevent the NHL from turning into a bloodbath with the mandatory visor rule is that goons will be so preoccupied with tweeting about their next hit that they will miss their target entirely.