With the 2013 NHL Entry Draft mere days away, it seems appropriate to address an oft-overlooked aspect of that event.

While bloggers diligently compare every prospect against his contemporaries and predecessors through a slew of assessments and reassessments of each draftling prior to the NHL's annual initiation ceremony, few (if any) discuss the strengths and weaknesses of the logos used for each draft.

In order to fill this gap in NHL coverage, I'm offering my analysis of past and present logos used to promote the draft. The first part of this series will analyze the current logo and offer some suggestions for improvement.

Tomorrow I'll offer a (hopefully) humourous history of how the NHL has branded the draft. I'll also provide commentary on singularly absurd logos that have been used over the last 20+ years.

Here's the logo for the 2013 NHL Entry Draft. This logo gives us an insight into what the US map would look like if all the other states crumbled into either the Atlantic and Pacific Oceans. 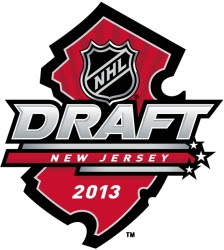 The image chosen gives me the same sort of underwhelming feeling as when I found out what vital organs actually look like. It's neat to know, but the shape itself doesn't tell me anything about New Jersey--it's people, culture, and contributions to the world.

What's worse: this logo doesn't do anything to get me psyched for the draft. This promotional material makes me think that the event will be a dull affair. Surely New Jerseyans have much more to offer us than a cake-pan representation of their state's shape.

Moreover, this approach to designing draft logos itself is flawed. While this state's outline, which vaguely resembles a chicken wing or a human kidney ravaged by life in New Jersey, isn't aesthetically appealing, it's at least somewhat distinct. If the NHL tried to replicate this design for drafts held in either of the Dakotas, Kansas, Wyoming, or Colorado, the logos would be rather indistinct as as all of these states look like slightly misshapen rectangles.

My final criticism is that this logo doesn't allude at all to the New Jersey Devils. Indeed, like many of the logos that I will discuss tomorrow, it not only neglects the pride of Newark, but it also seems to pay homage to Dallas' NHL team by including stars to the design.

So how could the NHL have developed a logo that epitomizes New Jersey? Here are three suggested approaches and examples for each design.

A. Rely on NHL, TSN, and New Jersey Star Power

I swear that I did not use MS Paint to produce the image below. Putting NHL Deputy Commissioner Bill Daly, TSN personality James Duthie, and Snooki from Jersey Shore together never would have occurred to me despite my often-feral imagination. Only the absurdness of reality could concoct a way to bring these three together, and the NHL should have seized upon this serendipitous (or sangria-dipitous) moment to produce a unique draft logo. (Thanks to James Duthie for sharing this picture--minus the draft logo--on twitter.)

I can only imagine that this was taken after TSN shot it's latest sketch (a Jersey Shore-like reality series on draft prospects partying before selection day). Or, maybe HBO had these three film cameos for a Boardwalk Empire and NHL 24/7 crossover.

Note that Duthie and Snooki have no reservations about being photographed with alcoholic beverages in their hands. Daly might seem more straight-laced by clutching his smartphone rather than a drink, but I'm willing to bet that he has something harder than liquor (perhaps a vat of adrenochrome?) in the hand hidden behind Snooki.

To me, this logo epitomizes what New Jersey is all about: strange re-configurations of social groups produced by drunken mingling. Duthie's demonic eyes also evoke the legendary "Jersey Devil" that is said to haunt the state, so there's an extra shout-out to New Jersey's history of getting rid of an extra child by turning it into a dragon-like thing and letting it fly away, and/or of carrying on an extramarital affair with the devil.

B. Rebranding an Iconic Album

There is perhaps no celebrity from New Jersey who is more famous than Bruce Springsteen. In order to boost the draft's profile, the NHL might consider appropriating "The Boss'" most iconic album. 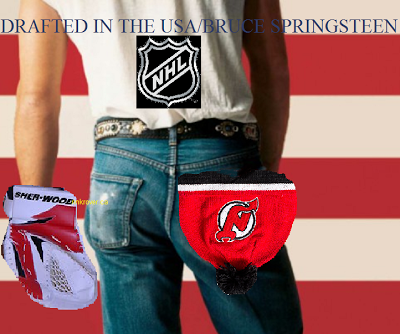 This logo includes the bonus track "Forechecking in the Dark."

This logo helps to promote the NHL in the USA (one of Gary Bettman's mandates) by making each selection (regardless of where he's from) American as all of their NHL careers were born in the United States. The picture itself will also encourage the audience to chant "U-S-A, U-S-A" before and after every selection as each pick is a win for America.

As a sideshow, the league could have Hulk Hogan (dressed in a Philadelphia Flyers jersey) fight all three mascots of the 2014 Olympics in Sochi to settle a contentious debate enveloping professional sports today. Having Hogan landscape eat mascot's face with body slams will declare to the world that, even though more and more players are signing lucrative deals overseas, the NHL will beat the KHL in the Hockey Cold War.

Instead of revising a famous album to suit the NHL's political interests and wage a ridiculous ideological war with Russia, the league might develop a logo that pays homage to the most famous movies set in New Jersey.

I'm talking, of course, about the loosely-connected septology that comprises Kevin Smith's "Viewaskiewniverse." 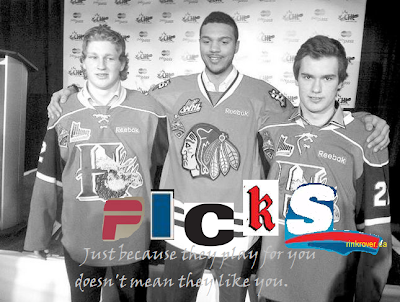 I bet the NHL could even get Kevin Smith and Jason Mewes to do the post-draft interviews (in character as Jay and Silent Bob) with prospects. By doing so, the league will break the record for "total number of F-bombs dropped in a sports show" that is currently held by Bruce Boudreau following his many contributions to the 2010-11 edition of HBO's NHL 24/7.

The movie "Clerks" used clippings from the names of products sold in convenience stores to spell its title. Drawing on that style, I've spelled "picks" in the above logo by taking letters from the following magazines: ESPN, Sports Illustrated, McKeen's Hockey, The Hockey News, and Sportsnet Magazine.

Of course, the NHL can't just hijack a filmmaker's work. But I don't foresee this plan causing any copyright problems as Kevin Smith, a huge hockey fan, would certainly be glad to lend his cinematic universe to the NHL.

This plan, however, might backfire: parents of prospects may object to the NSFW language, drug-related jokes, and acts of animal cruelty necessary to make this draft a Kevin Smith production. Indeed, Smith and Bettman might both end up having to drink hemlock like Socrates for corrupting the NHL's youth by exposing them to New Jersey's counterculture.

Furthermore, there's always a chance that viewaskewniverse staple and covert Scientologist Jason Lee would try to crash the NHL Combine. Once there, he'd make the league's best prospects take tests to assess their thetan levels. The last thing the world of professional hockey needs is to turn the next season of the Edmonton Oilers' series Oil Change into a sequel to Battlefield Earth.

Check out my blog tomorrow for the second part of this post!
Posted by Unknown at 18:16