Last Thursday, the Toronto Maple Leafs caused an uproar throughout their fanbase by signing Colton Orr, one of hockey's heavyweight fighters, to a 2-year contract with a $925K cap hit per year.

It's not the length or price of the contract that has angered many Leafs bloggers: it was the fact that Orr, a skater who (according to his critics) can fight but can't play in any meaningful way, is a relic of hockey history who has no place in today's game.

Personally, I'm a fan of Orr more so than the statistics with which people decry his spot on the Leafs' roster.

To me, it's bizarre that these writers rely on stats to argue for or against specific players. If they decided whom they like and dislike solely on stats, shouldn't Toronto's poor numbers over the last decade have made them abandon this team for one with better stats?

Furthermore, don't players offer fans more than fodder for Excel sheets? Sure, Orr racks up more minutes in the penalty box than he ever will on the ice, but therein lies his value as a source of entertainment for Leafs fans who relish a good hockey fight.

In the spirit of both dubious reasons to be a fan and a disregard for objective methods of analyzing players, I give you six reasons to like Colton Orr.

1. Colton Orr is a Renaissance man

Colton Orr has dabbled in many sports over his career as an athlete. For instance, his penchant for soccer once led him to play in net for Manitoba in the Canada Summer Games.

It might seem had to imagine Orr being a team's last line of defence in the crease, but his approach to the game remained the same regardless of which sport he was playing. Speaking of his experience in net, Orr told Paul Hendrick that he "always played an aggressive style--always challenging the ball, and always the shooter."

While I couldn't find any pictured of Orr playing soccer, his quote convinced me that it's safe to assume it would have looked something like this.

Had Orr stayed with soccer, there would be far fewer feigned injuries and many more legitimate ones.

Indeed, I imagine that Orr would re-enact a famous scene from 300 by using the bodies of people who tried to score on him as the mortar for a wall built to protect his net.

2. Orr's stats are more impressive than his teams' numbers in the standings

According to dropthegloves.com, Orr has engaged in 129 fights against various NHL players since becoming a mainstay in the league during the 2005-6 season. Only once has he failed to fight in a season in which he's played: he only dressed for one game in the 2003-4 season, and he apparently didn't find the time in that game to leave a lasting impression on an opponent's face.

Given these numbers, isn't it the team as a whole more guilty than Orr in particular when it comes to stockpiling embarrassing stats?

3. Orr makes more contributions to the game than his critics admit

While his detractors argue that Orr doesn't contribute much to the game, these photos prove otherwise. 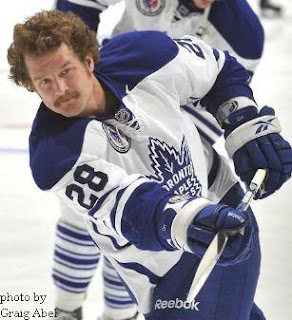 His porn-star 'stache makes us laugh. 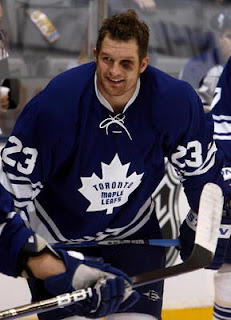 His war wounds make us cry. 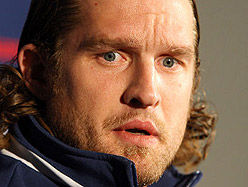 His Hamlet-like contemplation makes us question our place in the cosmos. 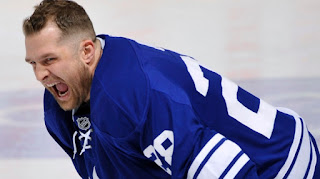 He even makes us yawn. (I dare you to stare at this pic for a minute without yawning.) 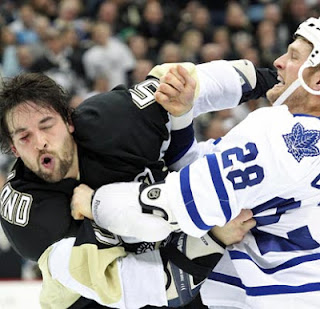 But he's at his best when he's making other teams cry.

4. Orr is a role model for the Leafs as an underachieving organization

Orr has fought against 25 out of the 30 current NHL teams. That number doesn't reflect all the teams that he's scrapped with since he has fought against both the Atlanta Thrashers and the second incarnation of the Winnipeg Jets. Moreover, Orr has fought the entire Eastern Conferece--including the Leafs when he played on other teams.

In contrast, the Toronto Maple Leafs, in nearly a century of hockey operations, have only combated 18 of the 30 current NHL franchises in the playoffs.

In light of these stats, it seems that Orr has accomplished much more in a shorter period of time than the underachieving franchise for which he plays.

5. Orr will add extra entertainment to the 2014 Winter Classic

Orr has fought most against the Ottawa Senators, Pittsburgh Penguins, and Philadelphia Flyers.

The teams against which he has yet to fight are the Chicago Blackhawks, Detroit Red Wings, Los Angeles Kings, Nashville Predators, and Phoenix Coyotes. Players on those teams should consider this blog post as advance warning that Orr will most certainly be looking to finish his sampling of the NHL's 30 flavours of fighting by taking on their tough guys next season.

The pending bout between Orr and a member of the Detroit Red Wings is particularly significant given next year's Winter Classic. If I ran the show on HBO's NHL 24/7: Maple Leafs/Red Wings, I'd form a subplot around Orr not having fought a Red Wing yet in his career. The series would then feature his preparation for an old-school scrap between him and Detroit's top fighter.

The upside of this move is that it would combine the appeal of HBO's 24/7 specials on boxing with the growing interest in hockey among American audiences!

6. Nobody puts Colton in the corner

Orr is fortunate to count former Leafs GM Brian Burke among his fiercest defenders. Having him in your corner is worth roughly 5-6 statisticians as the bellicose Burke has beaten sceptics by blasting their criticisms with a bombardment of bluster. He's challenged colleagues such as Kevin Lowe to a fist fight in order to avenge the loss of Dustin Penner via an offer sheet.  .

Orr, however, brings out both the ferocious and soft sides of Burke. Upon sending Orr down to the Toronto Marlies of the AHL during the 2011-2012 NHL season, Burke stated that the decision to demote Orr tormented him so much that he couldn't sleep the night before informing Orr of the decision. 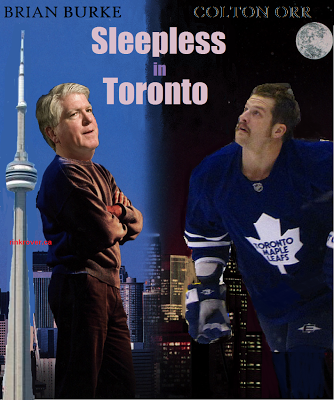 No doubt Burke's restlessness gave his pillow a lesson in pugnacity that night.

7. Orr is more than a one-dimensional player

Upon arriving to play at Ricoh Coliseum, then Marlies head coach Dallas Eakins bluntly told Orr that any hope of him remaining in the AHL let alone playing again in the NHL depended upon him cleaning up his act.

Orr had become a slothful skater and an unwieldy puck handler. He'd have to lighten his frame, speed up his skates, and develop something like agility with his stick in order to retain employment as a professional hockey player.

Not only did Orr embrace the daunting exercise regimen planned for him so that he could slim down and speed up enough to secure a spot on the Leafs roster in 2012-13, but he also cleaned up his looks:

By cleaning up his act (particularly losing weight and grooming himself) Orr proved that he's not (as his detractors often allege) a one-dimensional player: he's also boyfriend material.

Left: Orr as a stunt double who handles stage dives for members of Pearl Jam.
Right: a clean cut Colton who is fit to take any Disney princess on a date.
Posted by Unknown at 17:07