When researching CHL teams ahead of the 2013 Memorial Cup, I came across a company that makes custom, plush mascots for teams. Check out their awesome site--especially the gallery in which they post their work.

That gallery contains some hilarious CHL products that I want to discuss below. Just to be clear, I don't mean to trash this business. They do some great work, but some of their items (often due to the source material) are incredibly bizarre and absurd. I can't pass up the opportunity to discuss them!

So the point here is to draw attention to some strange aspects of sports mascots and merchandizing without being mean spirited. I hope my attempt succeeds!

The mascot for the Vancouver Giants is, appropriately enough, a giant. If you look closer at his jersey, however, you'll notice something disconcerting. 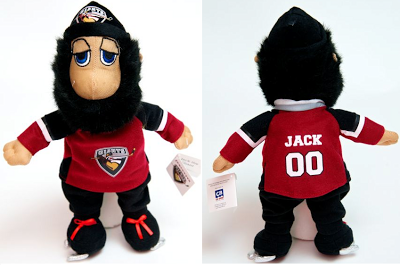 I didn't know that Vancouver had such a sick sense of humour. Would it be funny if the Portland Winterhawks (WHL) named their mascot "Custer?" If the Plymouth Whalers (OHL) chose a whale for their mascot? Oh, apparently they did. Well at least they didn't name the whale "Ahab."

Anyway, would it be okay if the Halifax Mooseheads (QMJHL) named their mascot "Keith's?" Of course not, so why does Vancouver think it's okay to mock gianticide?

Actually, I'm tempted to reverse my outrage because this game of coming up with inappropriate mascots/nicknames is rather fun. Let's see what else we can come up with!

The Blainville-Boisbriand Armada (QMJHL) should pick Sir Walter Raleigh as their mascot in honour of the English navy defeating the Spanish Armada in 1588. Here's what a Raleigh Bleacher Creature would look like: 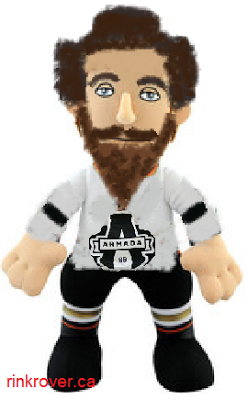 The Acadie-Bathurst Titan's mascot should be named Saturn as he was one of the most prominent titans in myth. In order to make the mascot self-denigrating, the team should model its titan after Francisco Goya's painting "Saturn Devouring His Son." Here's my prototype. 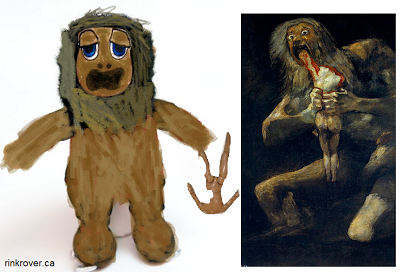 Ever wonder what the love child of Animal from The Muppets and Jonathan Davis from the band Korn would look like? Well, look no further than the Guelph Storm's mascot Spyke. 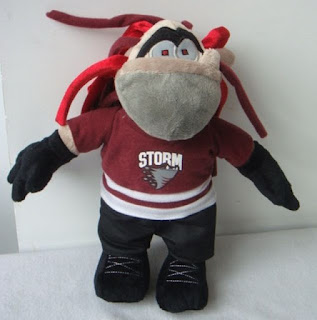 I hope the designers included a special product feature that emphasizes this toy's connection to the 90's rock sub-genre Nu Metal. Maybe Spyke plays Korn's "Twist" or "Got the Life" if you squeeze his stomach, or perhaps he is sold with the Queen of the Damned soundtrack as a product tie-in.

I assume that Kamloops chose the nickname "Blazers" as an homage to British Columbia's laid-back attitude toward recreational drug use. Their mascot Digger, however, takes this lax attitude too far. 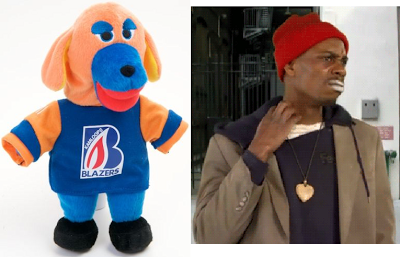 One of these two figures is Digger, and the other is Dave Chappelle's crack-addicted character Tyrone Biggums. I'll let you try to figure out which is which.

Wearing a jersey that I probably was once an alternate cover for the novel Trainspotting, Digger epitomizes the catatonic gaze, oxygen deprived lips as well as eyelids, and salivating mouth of a habitual drug abuser.

Characters such as Blazer seem out-of-place in a hockey arena. He's more suited to occupying a windowless basement lit only by the flickering of an old, malfunctioning TV set that briefly illuminates the array of Led Zeppelin banners hanging from the walls. Adding to this scene's mood of inertia is the endless loop of Pink Floyd's The Wall playing in the background.

The Sudbury Wolves mascot Howler offers a different kind of terrifying than the Blazers' Digger. While I'm not certain that these toys were made specifically for children, it seems safe to assume that plush (and therefore cuddly) toys are general given to children as companions for sleepy-time. Working under that assumption, what would possess a person to make this toy? 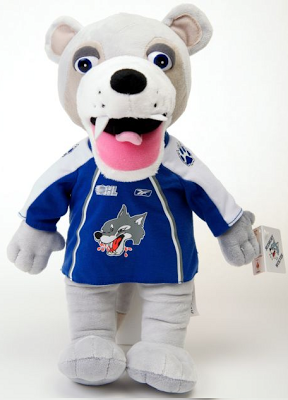 "I'm what Dracula turns into on a bad day!"

The focal point (or at least the part of this toy that you can't help but obsess over once you see it) is the pair of pointed, asymmetrical fangs and the protruding tongue that eagerly anticipates some sort of vampiric attack.

The worst part is that the jersey leaves no ambiguity about this toy's intentions. The logo shows a wolf's head that has blood dripping not only from its fangs but also from the underside of its jaw--suggesting that the beast has just gorged its insatiable bloodlust and now searches feverishly for its next target--maybe you!

Perhaps this toy was produced as an object lesson demonstrating the food chain, or maybe it's some other attempt to introduce children to the Hobbesian notion that life in a state of nature is nasty, brutish and short. Either way, I couldn't imagine handing this toy to a kid and saying, "Night, night. Sleep tight. Don't let Howler bite! Muahahaha!"

I think that the Portland Winterhawks' mascot (the unfortunately named Tom-A-Hawk) could be the funniest thing that I have ever seen in my entire life. I sincerely lol'd the first time I saw this image. As a matter of fact, this mascot's maudlin melancholia made me laugh so hard that it was difficult to finish this post. I immediately tried to think of situations that might justify this ridiculous expression of grief, but I soon came to the realization that the woeful Winterhawk would turn any serious scene into a travesty just by his very presence in it.

To test this thesis, I inserted Tom-A-Hawk into a number of famously sad scenes from movies. Of course, I've had to modify some of the movie's contests to suit the inclusion of a sports mascot into their plots. See if you can keep from cracking up while looking at the gallery below.

Marlon Brando's performance as a father devastated by the brutal gangland assassination of his son won him an Oscar for Best Actor. Yet with Tom-A-Hawk as the lead, the movie becomes a farce in which Don Vito appears to have been cuckolded by his wife who then dupes the mafia leader into believing that Sonny Corleone was his own son. In this context, the scene seems uncomfortably pathetic rather than tragic. 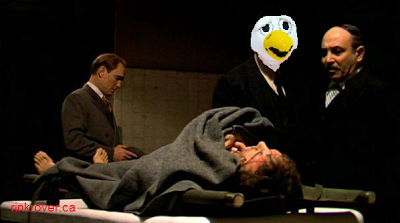 "I want you to use all your powers, and all your skills. I don't want his mother to see him this way. (Pause) Look how they massacred my boy..."

Even without the subtext of infidelity and children of doubtful parentage, Tom-A-Hawk's look of abject sorrow prevents people from emotionally connecting to his character's sense of loss.

"You lost the Memorial Cup on a Sunday evening. Afterward I had the Halifax Mooseheads' arena bulldozed to the ground. Momma always said losin' was a part of life. I sure wish it wasn't. Little Seth Jones, he's doing just fine--about to get drafted. He wrote you a letter, but he says I can't read it, so I'll just leave it here with you. Portland, I don't know if Momma was right or if it's Lieutenant Dan. I don't know if each CHL team has a destiny, or if we all float about the standings accidental-like on a breeze. I think maybe it's both."

Perhaps Tom-A-Hawk doesn't work for Forrest Gump because he needs to play a character who expresses loss more poetically. Well, if he can't succeed at doing so as Christian from Moulin Rouge! then there's no hope for him. Here's a dramatic pre-enactment of the mascot on NHL Entry Draft day later this month. 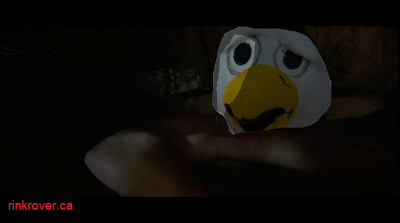 "In Oregon, the rich watch the best players of the WHL. The most promising prospects among these formed the team that I loved. The Winterhawks. The best of them, Seth Jones, was a defenceman who blocked shots for glory. He was the star of the Portland Winterhawks. That prospect . . . is . . . dead [to me now because he's been drafted into another league]."

D. It's a Wonderful Life

Even when Tom-A-Hawk focuses on the loss of his own life rather than that of another, he diminishes the gravity of the situation by his expression. Here he is contemplating suicide in Frank Capra's Christmas classic. 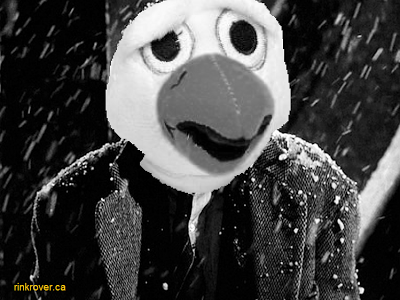 (Side note: is it possible that Tom-A-Hawk was modelled after Jimmy Stewart? They make awfully similar faces.")

E. Return of the Jedi

For the last image, I'll offer you the saddest moment in cinematic history: a moment that encapsulates both communal triumph and personal tragedy in such a masterful way that it makes Tolstoy's War and Peace look like a paltry meditation on war, loss, and the enduring nature of the human spirit.

I'm, of course, referring to the moment in which two Ewoks dive out of the way of enemy fire. The one is relieved to find himself alive after narrowly evading death-by-laser. He's about to celebrate the empire's defeat when he realizes his buddy--his lifetime companion (the Pylades to his Orestes, the Horatio to his Hamlet, the Murtagh to his Riggs, the Harold to his Kumar)--is dead. He then utters the most gut-wrenching lament ever heard. It is so devastating, in fact, that George Lucas decided not to translate it from Ewok to English for fear that it would mortally wound the souls of all those who heard it.

And yet it seems about as ridiculous as Darth Vader shouting "no!" at the end of Revenge of the Sith.