4 Ways to Increase Scoring in the NHL

The initiative to increase scoring remains toward the top of the NHL's agenda each year. The latest efforts to forestall the supposed doomsday scenario of the league entering another "dead puck era" were passed by the NHL's General Managers yesterday. These measures include making the nets shallower and (I assume) the plan to decrease the size of goaltending equipment.

These provisions may allow a slight increase in the average number of goals scored per game, but they aren't enough to make a substantial difference in the league's stats in the long run.

I urge NHL executives to vote down the recently passed measures at the Board of Governors meeting on June 26 because these adjustments to the game are insignificant. Instead, the BOM should table the following suggestions, which will certainly cause scoring to spike.

Before a game begins, it's common practice for officials to freeze pucks in order to reduce each disc's bounciness. This procedure is the exact opposite of what the NHL should be doing.

Reducing a puck's bounciness makes it easier to shoot but allows goalies to catch it with just as much (if not more) ease. What can be done to make the puck harder to catch? Heat it!

Benefits: By super-heating pucks, goaltenders will likely give up more rebounds as they won't be able to freeze the puck without it causing their equipment and skin to fuse together. The fear of searing their flesh will give netminders an incentive to keep the puck in play. Consider this plan a way to increase scoring through negative re-enforcement.

Super-heated pucks will also make it easier to score on a goalie's glove-hand as there's a strong chance that the puck will simply burn through the trapper and scorch its way into (and perhaps passed!) the net.

Drawbacks: If the puck catches on the netting around the rink or goes out of play, it's quite likely that the entire arena will be engulfed in flames.

One frequently-suggested method of increasing scoring involves changing the dimensions of the playing surface. Proponents such as Brian Burke argue that the ice surface needs to be expanded as players are larger, quicker, and more skilled than the bygone greats for whom the current dimensions of the rinks were designed. By giving teams more room to play, they will be able to create more scoring chances.

Of course, the increased space might make scoring even tougher by giving each team more neutral zone space in which to wage a war of attrition in a one-goal game. I agree with the notion that the game needs to be updated, but I think that we should adjust play to reflect advances in concentration and the number of on-ice officials as well as the players' increased speed and skill.

Why not add more pucks to a game?

Benefits: Having two or more pucks in play at any given moment will exhaust a goaltender's ability to make every save on any given night. Simply put: shutouts will become an endangered species.

Having more pucks will also make the game harder for the skaters. Teams will struggle to handle two pucks in either zone or score with one before their opponent scores with the other. Challenging each team's ability to control puck possession by adding a little chaos to the game will cause a flurry of action and, by extension, excitement for fans.

Here's how this modification would work: one linesman and ref would have to monitor one end of the ice alone. They'll just have to trust their partners on the other end of the ice to make the right calls as they won't be able to oversee the action at the other end of the rink. By forcing refs to concentrate on the action in their zone, we'll eliminate controversial calls like the penalty on Daniel Sedin for boarding during overtime in the 2013 playoffs.

When one puck goes out of play, action continues until a stoppage. After which, the additional puck(s) will be reintroduced into play on the next faceoff.

If this change in rules pans out the way that I think it will, we could see the NHL livening up the action further by randomly throwing out a third or fourth puck for a limited time. They could also make one puck worth more points if scored, or put a "skull and crossbones" on a puck to signify that a team who scores with it will actually lose points. (The latter suggestion would be kinda like the "death mushroom" from Super Mario Bros.) 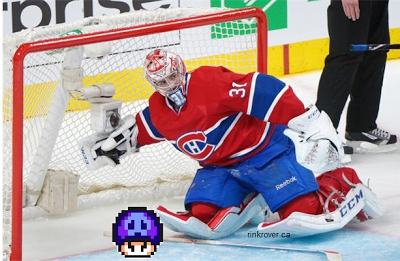 Goalies will commonly drop their sticks and welcome the "death puck" into their nets.

Drawbacks: There will be a rapid deterioration in the mental health of players, officials, time keepers, score keepers--well, pretty much everyone involved in the game.

Goalies will struggle to handle the emotional roller coaster that will take them from making an amazing save to giving up a soft goal in a matter of (real time) seconds. Officials will be traumatized by the onslaught of offence taking place in their end of the ice. Time keepers will hide under their desks rather than attempt to determine when play stopped. Score keepers will have meltdowns while trying to figure out who assisted on which goal and whether a goal added a single, multiple, or a negative point to a team's tally on the evening.

3. Take away the goalie's little helper

I'm not referring to Valium (as The Rolling Stones did in "Mother's Little Helper") but the goalie's stick.

The NHL is concerned about reducing the size of a goaltender's equipment, but they might have more success in their goal (see what I did there?) to increase offence by instead eliminating part of a goalie's equipment.

Benefits: Well, there's the obvious increase in scoring resulting from goaltenders losing a key part of their defence.

Also, we'll eliminate the statistical embarrassment stemming from goalies whose stickhandling results in them racking up goals and assists. I am, of course, assuming that the league introduced the "trapezoid rule" because everyone hated the idea of goalies having any offensive prowess.

Yes, the elimination of the goalie stick is really just the foregone conclusion to the introduction of the trapezoid behind the net. Instead of a stick, goalies will have the option of using two trappers.

Drawbacks: Well, every goalie will look like a huge sissy who is afraid of getting hit by the puck as he flails his arms in the hopes of knocking away each scoring chance. Others who focus on catching pucks will look like a monstrous genetic modification of crabs. But hey, isn't the whole point of increasing offence to humiliate goalies?

The real problem is that this plan will take a long time to implement. The NHLPA will object to the sudden elimination of sticks, so the league will have to produce a long-term plan that will lead to this equipment's removal from play.

The plan will begin with making goaltenders use cricket bats. Goalies will at first jump at the chance to use a bigger stick, but the lack of a blade with which to pass the puck will diminish their ability to play their position well. After that, the league will introduce a smaller implement each year: we might go from cricket bats to lacrosse sticks, curling brooms, pool cues, tennis followed by badminton rackets, and then ping-pong paddles before they're given nothing in place of the goalie stick.

Of course, the players' union might strike back by forcing the league to accept contraptions that would give goalies extra arms: picture something like Dr. Octopus from Spider-Man in net. 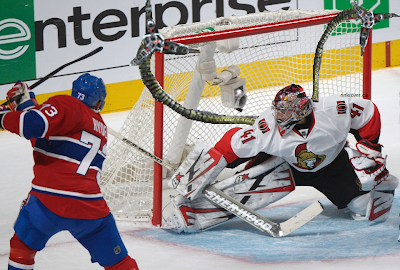 Here's what Craig Anderson would look like if he rocked this future equipment.

As many commentators have noted, defensive players are stifling offence by not only blocking shots but standing in the way of shooting lanes so that enemy forwards have few options to create scoring chances. Despite the prevalence of this problem, the NHL's Competition Committee has done nothing to address it.

So how do we move defensive players out of the way while creating new shooting lanes? Re-engineer nets to include telescoping posts and crossbars that expand and contract unexpectedly.

At any point in the game, the net could be as wide and tall as a soccer net, or as small as a (square-shaped) dartboard. Any sized rectangle or square between those extremes are likely to take shape in a game with morphing nets!

Benefits: Players may be able to block one shooting lane, but they'll be terribly out of position when the next one opens up. Goalies won't be able to rely on making positional saves because the net itself will betray them.

This innovation will also make attackers work harder as they will need to develop their cycle game around the reality that a scoring chance may present itself and then suddenly disappear before they have a chance to take a shot on net.

In the end, the expanding-contracting nets will be responsible for as many unfortunate goals-against as they will provide unexpected saves by moving the post or crossbar in the way of a decent shot. That sort of balance should make this option the most agreeable of the ones that I am suggesting.

Drawbacks: If there's one thing that the league and its fans hate, it's delays. New technology means there will be a greater chance of a malfunction that requires the game to be paused for an extended period of time. Also, new rules will need to be added surrounding malfunctions. Will the malfunction cause a stoppage in play or will players have to resume defending/attacking a stationary net until the next stoppage in play?

There will likely be more injuries resulting from the nets as skating around them will be treacherous. It's bad enough when a player sticks his leg out to knee-cap an opponent: imagine the damage caused when the net itself blindsides a skater!

Even worse, there's a possibility of a catastrophic malfunction in which the net suddenly expands and contracts violently. If a goalie is deep in his crease when this happens, it will look like he's being consumed by a Hellmouth. 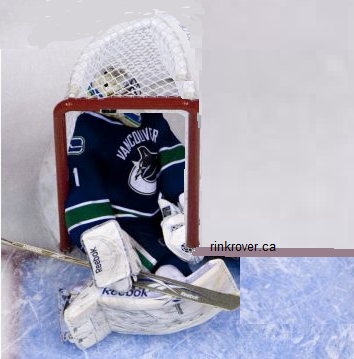 On the bright side, getting eaten by the net will at least take Roberto Luongo's mind off his terrible contract.
Posted by Unknown at 18:34