Trophy trivia: Things I learned at the HHOF Part 2

For the first post in this series on the Hockey Hall of Fame (how hockey invented grunge music), click here.

With the announcement of candidates for the Vezina trophy today, I thought I'd share what I've learned about this trophy as well as the Art Ross trophy: when taking a close look at either award, both appear a bit creepy.

Here's a close-up of the Vezina trophy: 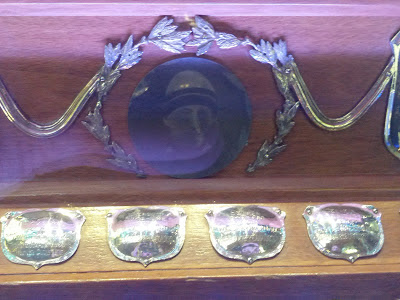 That, I assume, is the face of Georges Vezina the Habs legend who set records for playing 328 consecutive regulation and 39 consecutive playoff games (starting each one and not being substituted in any). Due to complications from tuberculosis, Vezina had to end his playing career abruptly. He died four months later. And by "had to end his playing career," I mean he tried to play through TB until his team forcibly removed him from the net!

As a result, it's hard to determine exactly what his picture on this trophy is supposed to say. On the one hand, it could be like the sword that suspended by a single horsehair above the throne where Damocles sat: such objects serve as reminders that the powerful and fortunate face peril at every given moment. Perhaps the NHL included the picture of Vezina as a visual reminder that athletic ability is both fleeting and precarious even for the best athletes.

On the other hand, maybe the league added the picture to humble the so-called great goaltenders of today. Vezina's smirking face suggests that he's not at all impressed with his descendants' achievements, and that he has no patience for their excuses.

I imagine the trophy rolls its eyes when its recipients give their acceptance speeches. If it could talk it would probably say to them:

"Oh, you think you sacrificed mind and body for your team? You whine about needing bigger and bigger pads and go on IR for weeks while 'suffering' through life-threatening injuries like what--a sprained ankle? I suited up for my last game with a 102 degree fever, vomited blood during intermission after stopping all the shots taken against me, and I wouldn't let them bench me until I collapsed in my crease!"

To add to the legend of Georges Vezina, I'll relate a tale told to me at the HHOF by a guy I assumed was some sort of hockey druid. He fabled that the trophy can speak on the evening that the Stanley Cup is awarded. First, it sings an eerie rendition of the Habs' "Ole" cheer with a ghastly, emaciated voice. Then it announces which team will win the cup next year. Legend has it that if anyone hangs around at night in an attempt to overhear the trophy, that person's team will never win the cup again!

Now here's a close up of a creepy detail in the Art Ross trophy: 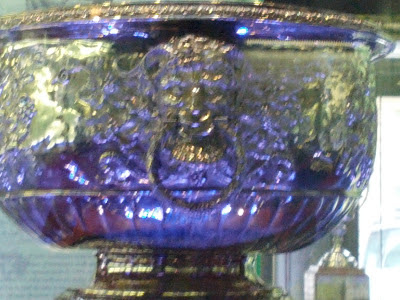 What is that thing? Is it a cheetah with an over-sized and misplaced nose ring? 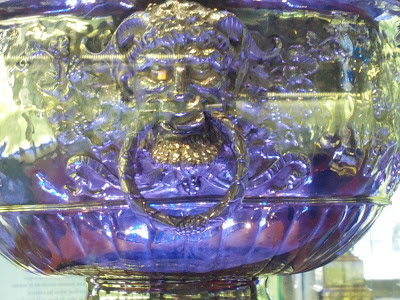 It's still not clear although it looks vaguely familiar--like something I saw in a movie as a child. I seem to remember it bantering with a deaf, ornery companion.

Let's take an extreme close up of this figure: 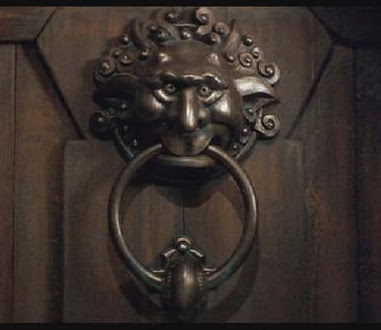 Well, now my mind's overrun with even more questions!

Does that mean that Art Ross plundered Jareth's labyrinth and incorporated this token into this trophy in a similar fashion as Athena made Medusa's head part of Zeus' shield?

Does another trophy in the HHOF have the other door knocker on it? Does it nag and heckle passersby?

If someone takes out the door knocker's ring from the trophy, will the head tell bad jokes like in the movie?

If I rap the door knocker's ring against the trophy, does a door to the labyrinth open? Is David Bowie behind that door or trapped inside the trophy? If I release David Bowie from the trophy, will he grant me 3 wishes?

Feel free to share your speculations on what it means to have the door knocker's head on the Art Ross trophy. Perhaps we can then ask the MythBusters to test them!
Posted by Unknown at 17:27