Three ways to beat the Bruins

Last night could have been worse. For instance, the Leafs might lost like the Islanders. In fact, by thoroughly thrashing the Islanders, the Penguins gave the Leafs a bit of a smokescreen to conceal their lacklustre play. Still, "at least we're not the Islanders" isn't much of a cheer with which to rally a defeated team.

Looking to the next game, it's time we focused on how to beat the Bruins. Here are three suggestions that the Leafs might consider to gain a competitive edge.

No, not by out-playing them physically; the Bruins enjoy that brand of hockey. Instead, I'm suggesting that we take a page from the Dr. Seuss playbook and steal all of their possessions. This scheme makes the most sense because Randy Carlyle kinda looks like the Grinch. 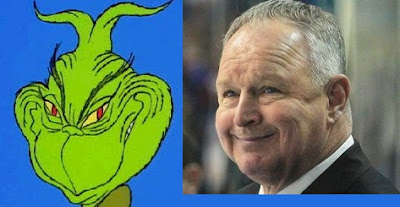 Yep, both have that same face-encompassing smile. Also, note that the Grinch's eyes turned blue when his heart grew. Carlyle may be a similarly reformed Grinch. Luckily, I've seen a documentary on how to shame former Grinches into honouring the "Grinch oath," which is simpatico with my plan to beat Boston.

So, Carlyle dresses like Santa, makes Kessel his reindeer, and proceeds to plunder all the Bs of Beantown. 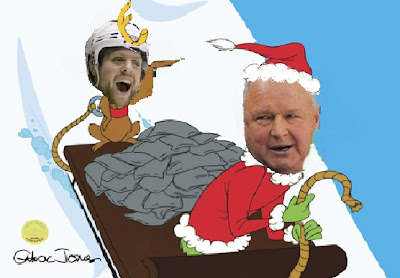 What did Randy say about no one being a passenger on the team, Phil?

Of course, this plan might backfire in two ways. It will make journalists fawn over the Bruins in their struggles after losing everything they have. And, what's worse, taking their things might not be enough to dispirit them.

They might score without mansions--score without Jags--score without iPods, X-Boxes, and jewel encrusted gym bags. If the impoverished Bruins beat the Leafs, then the Leafs will look like the worst team in the league. Then the final playoff game end would like this: (Boris Karloff narrating) "The Leafs took every possession, but stole not a single game; somehow or other, the Bruins played just the same." After they have B-ruined everything, I wouldn't even accept an invitation to carve roast beast with those jerks!

2. Send the Bruins cursed artefacts that will destroy them.

When writing my superstition blog yesterday, I realized that I don't have any rituals that will ensure the other team's failure. Perhaps we could send some cursed objects (like the rings in LOTR) that will do the Leafs' work for them by debilitating the Bs.

The downside here is that, as in LOTR, the cursed objects might turn the Bruins into Ring Wraiths, and their team's already tough enough to beat without giving them Nazgul-like powers. Plus, they might actually like being turned into evil minions. I'm sure that if you told them the consequences of accepting cursed rings, they'd probably react much like they are in this artists' rendering: 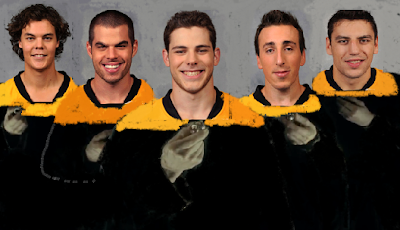 Plus, there's a chance that they might breed Chara with Orcs to create the dreaded Charuk Hai: 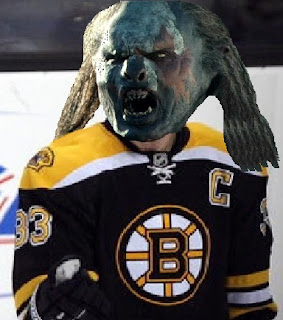 "Form ranks, you maggots: find the Hab-lings!" (I chose Habs instead of Leafs here because Montreal's team has five players that are shorter than Chara by a foot or more.)

3. Remove one of their star players from the lineup.

Nothing else seems foolproof, so let's consider the obvious: getting rid of a star player. We'd have to do it in a way that doesn't cause suspicion, so I'd suggest dropping a house on Tyler Seguin. 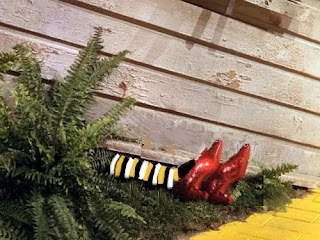 Hitting him while he's wearing the ruby slippers would be ideal. I hear those things have magical powers!

In the final scene of The Wizard of Oz, no one mentions the FBI investigating Miss Gulch's apparent death. Why? Because a house falling on someone doesn't seem like a planned hit, which makes it the perfect crime!

The only downside to this scheme is that Seguin's BFF Brad Marchand will be incensed by the incident. But, while the Leafs will need to up their pest control when Marchand gets his full goon on, we should be able to neutralize him the same way my classmate in high school neutralized an equally annoying, and equally short 10th grader: pick him up and drop him in a snowbank until he simmers down.

Plus, an enraged Marchand offers extra entertainment value. Here's an artist's rendering of how Marchand will receive the news of Seguin's misfortune. 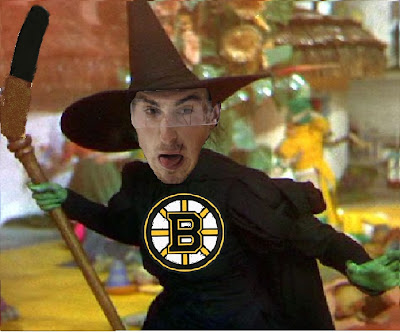 "Just and stay out of my way. Just try! I'll get you, my Leafies and your little Marlies too!"