It`s time once again for a Friday Photo contest!

Last week`s picture garnered a lot of attention from people who had suppressed the memory of Casey Jones' premeditated murder of the Shredder. Most contributions were of the "tell me that didn't actually happen!" variety.

Nevertheless, there was one caption that seemed to capture the picture best. Thanks to Judith Hoag for providing the winning caption, which reminds us that Casey Jones wasn't just a lackadaisical murderer but a chauvinist creep to boot! 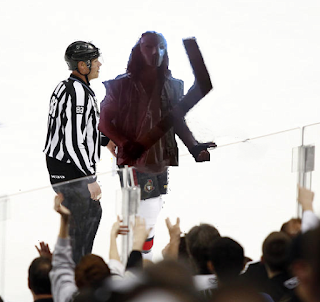 Ref: Sorry Jones, you're too much man on the ice. Now go off to the penalty box.
Jones: Lead the way, toots.
Ref: Toots?
Jones: Babe? Sweetcakes? Ah--princess! You wanna throw me a clue here? 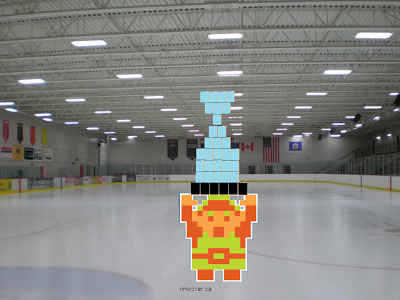 Suggested caption: "Hyrule? More like I rule!"
Posted by Unknown at 14:54