After an unprecedented number of suggestions for last week's caption contest, I spent hours considering each contribution before deciding the winner.

The competition was close, but, in the end, I felt that Stanley Ipkiss' suggestion managed to encapsulate the picture's poignant sociopolitical commentary on how masculinity has been besieged by sociopolitical criticisms that demand it to justify its existence in the 21st century's culture of post-masculine manliness.

It also gently satirizes how history has become functionally unnecessary in society today because our ability to span vast expanses of time with the simple click of a hyperlink has made the past ever-present.

Tim Thomas: I'm gonna take you apart.
Carey Price: Well, I hope you can enjoy the victory with one friggin' eye! 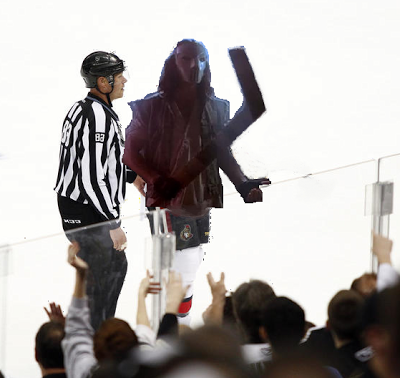 Suggested Caption
Ref: I don't care if the Shredder slashed you first; you get two minutes for killing him.
Casey Jones: Oops.
Ref: Not cool, Jones. NHL 24/7 is supposed to feature the teams, not a snuff film.

Seriously, what's the deal with Teenage Mutant Ninja Turtles (1990)? How are we supposed to accept that the heroes' reckless violence and disregard for human life have saved a legion of New York youths from corrupt father figures? Casey Jones beats one mercilessly with a golf club, and then straight up tries to murder the other one (after the turtles have knocked him off of a rooftop and into a garbage truck) by hitting the switch on the truck's garbage compactor? #RoleModel

Perhaps the movie's saving grace is the incorporation of hockey terms into its PSA against petty crime.

Casey Jones: Now that was a crime, you purse-grabbing pukes. And this (brandishes hockey stick) is the penalty.

He knocks them down.

Raphael (intervening): How about a five-minute game misconduct for roughing, pal?

Raph's right: we can't punish hoodlums for petty theft by beating them with a hockey stick because justice.

Still, I bet the NHL would see a marked decline in penalties if the refs calling them re-enacted the offence on the offender with brute force rather than making sissy hand gestures.