Superstition, or, How I helped the Leafs get into the playoffs

Do you have a superstition that has helped your team makes the playoffs?

This year, I decided to celebrate each Leafs win with a Mill Street beer. This ritualistic habit developed through trial and error. For instance, I once had a Tankhouse after the Leafs lost (but gained a point in the shootout) against the Penguins.

The Leafs then went on a losing streak. The light at the end of the tunnel appeared when they faced another shootout loss (this time, to Winnipeg). Having learned my lesson, I resisted the temptation to sacrifice a Tankhouse to a purely statistical achievement: Mill Street beer was for victories and nothing else. Needless to say, the Leafs proceeded to enjoy a winning streak that they never would have enjoyed had I not figured out how to observe 1-point games properly.

I once had to compromise the basis of the superstition, which began with only drinking Tankhouse. When it worked once, I didn't want to tamper with the system for the sake of variety. Then I stayed at a hotel that  didn't have Tankhouse. I settled for another Mill Street beer to celebrate the Leafs beating Carolina. This risk made me worry that I had let the team down by being unwilling to go bar to bar at 11PM in search of a specific draught. Luckily, the Leafs not only beat but shut out Ottawa in their next game.

Variety was, obviously, something the hockey gods smiled upon, so when I returned home I bought a mix pack of Mill Street beers. Now only one remains: one that I could not enjoy on Saturday because the Leafs took a night off when playing the Habs. A beer I thought I might get away with drinking if the Sens lost Saturday (meaning that the Leafs wouldn't have to play the Bruins), but the Sens won and vengefully sobered up my previous joy at their sorrow.

Now that the Leafs are doomed to play their worst-possible match up, I have to wonder how long this guy will hang around:

ME: The Leafs won't stop until I've rid the fridge of every last one of you.
Tankhouse (Sean Connery voice): I am the last one!

He's the last of his family, and he'd like to join them on the other side of the fridge, but I can't allow that until the Leafs win again. After all, the gods punished the Greeks (whose futile attempts to sack Troy would have exceeded 10 years if the gods hadn't intervened) for desecrating religious objects. Surely there will be some comparable form of divine retribution if I celebrate the Leafs' years of playoff futility coming to an end by impiously drinking this beer and thereby profaning my unspoken pact with the hockey gods.

But now I have to wonder whether this beer will be in my fridge throughout the off-season, acting as a mocking memento of the Leafs getting swept.

I'm already developing a seething despite for this beer reminiscent of the narrator from Edgar Allan Poe's "The Raven." Whenever I open the fridge, there's that beer staring at me, quothing at the top of its carbonation ("never score, never score"). 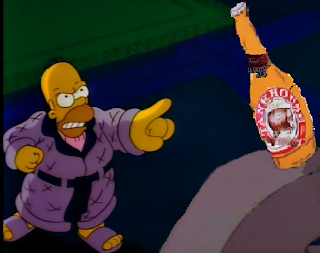 'Be those words our sign of parting, beer or fiend!' I shrieked upstarting-
'Get thee back into the brewery by Toronto's Great Lake shore!
Leave no brown head as a token of the jeer thy suds have spoken!
Leave the Leafs' lowliness unspoken! Leave thy shelf within the fridge I now abhor!
Take thy cap from out my heart, and take thy form out from my (fridge's) door!'

Okay, maybe the bottle hasn't plunged me into a level of loathing worthy of a Poe protagonist, but the bottle has become like Joe Flaherty's character in Happy Gilmore in terms of its incessant, infuriating mockery. On Sunday, for example, it seemed to say, "Did Boston beat the Sens? No? Uh-oh! Could you please cry a little closer? I'd like to have your tears as company over the Leafs looong upcoming off-season."

I'm already avoiding midnight-snack cravings because the bottle might catch me at a vulnerable moment when its barbed comments will really sting. It'll probably assume that I can't sleep because I'm worried that the Leafs will get swept. Even if I wasn't losing sleep on account of that fear, I will be after the bottle implants those doubts in my insomnia-ridden mind.

I could solve this problem by smashing the bottle and making its demise look like an accident. 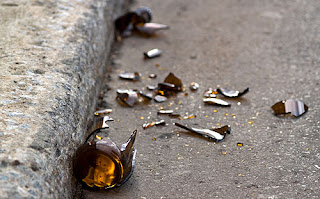 "No officer, I don't know things came to this. The bottle hung out with a bad crowd. Maybe it shot off its mouth to a street gang and was curb-stomped. I just hope it wasn't racially motivated like in American History X: I've heard that blonde ale and weissbier can be vicious toward darker ales. Well, as Oscar Wilde said, "We are all in the gutter, but some of us [are smashed into pieces so that we can reflect] the stars."

Or I could explain the bottle's absence to people by saying that it became despondent after the loss of its family and decided to take it's own cap. The problem, however, with these solutions is that I'm stupidly beholden to my superstition. So much so that any thought of disposing of this bottle-harpy is immediately quashed by visions of the Leafs setting an NHL record in 2013-14 by going 0-82-0 on the season.

So, I'm stuck in a state of limbo like the beer that will remain chilled in its pristine state until the next time the Leafs win--be it in the playoffs, next season, or the following. At some point, the Leafs have to come through for me. After all, they owe me since my superstitious ale-legiance has kept them going all season long.