My scapegoat for the Leafs' loss

Many commentators agree that while Brian Burke was dismissed from his post before the season started, the former Leafs GM should be credited for constructing the pugnacious and truculent team that made the playoffs this year.

There is, however, one member of the Leafs who woefully falls short of embodying Burke's vision. A pudgy member of the organization who shies away from physical contact on the ice as well as the scrutiny of the press after games. His inability to perform as expected has resulted in the Leafs getting knocked out in the first round of the playoffs.

I'm talking, of course, about Leafs mascot Carlton the Bear.

If the Leafs want to compete next season, Carlton has got to pick up his game: teams should fear facing him at the ACC and the home crowd should be in awe of his ferocious presence. With these qualities in mind, I have some suggestions for redesigning Carlton to make him a more imposing fixture in the arena. 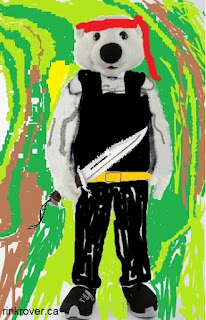 Pros: He's a war hero who is traumatized from the front, but he may come in handy if Canada has to deploy troops in active military conflict against a former enemy (e.g. France?). He will help the Leafs win games by setting booby traps to ensnare (and often debilitate) opponents.

Cons: He might denigrate the military and offend members of the Canadian Forces who are attending games. Also, he might wage a guerilla war with spectators cheering for the home or visiting team if he is mistreated. 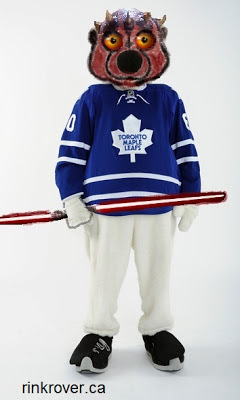 Carlton as a Sith Lord

Pros: Darth Carlton can entertain crowds during intermissions by making seemingly impossible leaps with the force and twirling his lightsaber like a baton. He can also help his team steal games through his telekinetic powers (ensuring that the Leafs always get the "lucky bounces" that they need to win).

Cons: His constant need to cultivate feelings of hatred, malice, and other destructive emotions will make the dressing room a hostile environment (perhaps even as bad as when Ron Wilson was head coach). Darth Carlton will retaliate the next time Don Cherry criticizes the Leafs. Also, the Sith bear will make "Liam Neeson appreciation night" awkward.

Possible catch phrases: His small queue of quotes includes an intimidating line from The Phantom Menace ("At last we will have revenge!") and an off-putting pick-up line from the video game based on that movie ("Prepare to become one with the force, Jedi!")

Pros: The Leafs will give a shout out to a film set in Toronto by adapting Carlton to suit Scott Pilgrim's alter-ego NegaScott from the movie adaptation of Scott Pilfrim vs. the World. Nega-Carlton is the embodiment of Carlton's shortcomings--the betrayals, jealousies, and other vices that Carlton tries to hide behind a squeaky-clean facade. In his attempts to expose the Leafs mascot for who he really is, Nega-Carlton will entertain the ACC's crowds with digital shorts that expose Carlton's past.

Cons: Does anyone know this comic or the movie based upon it well enough to get the reference? If not, he's just a creepy bear.

Possible catch phrase: N/A. Nega-Carlton isn't much of a talker. He expresses himself best by skulking in the shadows and leering at people in their peripheral vision. He's always up for brunch though. 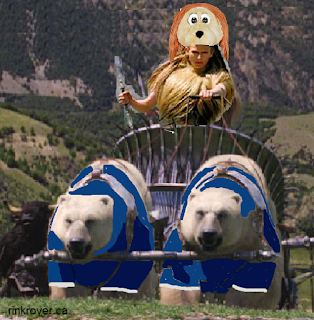 Carlton as a Beast of Burden

Pros: Improving on the current Carlton may be impossible, so let's consider changing his job description. Instead of making him the main mascot, have him teamed with another polar bear in pulling the new mascot (the White Witch with Spartacat as her war mantle) into the arena during games. A few years of hard labour should toughen Carlton up, and the White Witch won't put up with any nonsense. Also, her magic will ensure high quality ice at the ACC and the 2014 Winter Classic.

Cons: She will try to make it always winter and never Christmas in Canada, which is kind of how Leafs fans feel since the winter of their discontent began in 1968. Perhaps the rest of the country should feel this pain for a change?

Possible catch phrase: "I'm disappointed in you [insert rival player's name]. Did you honestly think by blocking a shot you could save your season? You are giving me your life and saving nothing. Tonight, Leafs Nation will be appeased for we will take the cup forever! In that knowledge despair . . . and die!" 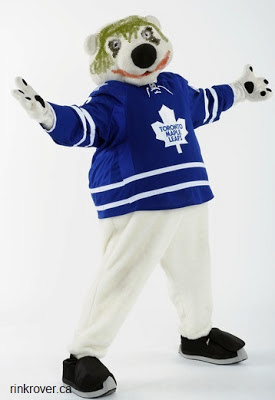 Carlton as the Joker

Pros: The Joker (through unconventional means) will rally the Leafs next season after their recent playoff collapse. He will impose a reign of terror on other teams that will make them frightened of the Leafs before they even enter the visitor's dressing room at the ACC.

Cons: He's ultimately in this position to launch a hostile takeover of MLSE and the league itself thereafter. Instead of playing fun games at the ACC during intermissions, he'll devise literally maddening contests that try a person's humanity by forcing them to gamble with their own well-being as well as that of others.

Possible catch phrases: To intimidate another team's players, he'll say, "Do you want to know how I got these scars?" To liven up/frighten the home crowd, he'll shout, "Why so serious?" 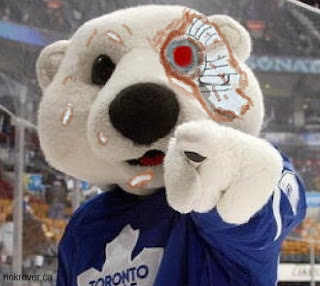 Pros: He is actually programmed not to hold anything back, so he will play with the utmost level of competition and leave it all on the ice, under a hydraulic press in a factory, or in a vat of molten steel.

Cons: He may get distracted during games if a ticket scanner picks up a patron by the name "John Connor." Also, his attempts to show humanity will be hampered by his inability to make convincing facial expressions (common among all mascots, really) and his inexplicable Austrian accent.

Possible catch phrases: When asked what he contributes to the game, he'll respond: "I'll be back-checking." During moments of intense action in any game, he will rush onto the ice and shout, "Pass me the puck if you want to live!"