If I were Paul MacLean . . . (Redecorating Dressing Rooms III: This Time It's Sens-sational!)

I created this blog to comment on various aspects of hockey without focusing on any teams in particular. I've noticed that my posts tend to favour the Leafs, so I thought I should counteract that by offering something positive on one of their rivals. So the goal here is to appear less biased but nonetheless subjective in my analysis. So, here's to the pride of Kanata!

Here are five different approaches to making purposeful posters, and five examples that the Sens might consider hanging in the dressing room and dispersing among members of the Sens fanbase.

1. Articulate your team's goal in direct, forceful and yet vague language 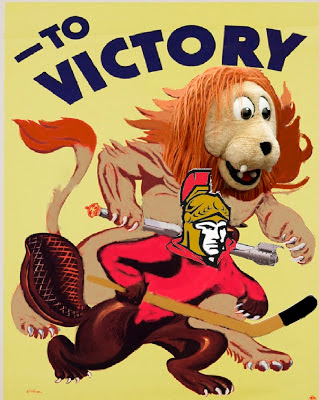 Here's Spartacat (in one piece at the moment but don't get used to his corporal integrity) and a Senator  wielding a t-shirt gun and hockey stick respectively as they head into battle.

Now you're probably thinking, "What's the deal with the beaver bits?" Well, this hybrid beast is intended as a compliment. When I lived in Ottawa, I was persuaded through various means (bribery, mockery, shaming, nagging, etc.) to believe that Ottawa was "Canada's team." Well, feel free to use this poster to back up the argument as the club's senator here is the mythical were-beaver or Senacastor Canadensis (North American beaver senator). Personally, I like the beaver-man because he reminds me of one thing I miss about Ottawa: sweet, sweet beaver tails!

2. Use the enemy's attacks against them 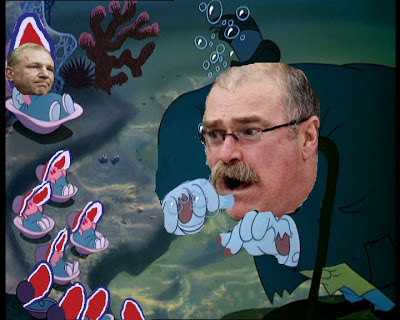 When Brandon Prust called Paul MacLean a walrus, he tried to undermine confidence in the Sens' coach by making him seem ridiculous. Instead of acting hurt or angry, the Sens might consider laughing (although more menacingly) with the Habs by embracing this image and using it as a weapon in the match up's underlying psychological warfare. This poster will cultivate a sense of superiority among the Sens for being with the clever walrus rather than the oysters (who will soon be served as a main course--Habs on the half shell) and the matronly Coach Therrien who is utterly incapable of saving his wards.

The poster also gives Sens the opportunity to creep out the Habs by skating over to them during the pregame warm-up and saying,

"'The time has come,' the Walrus said,
'To talk of many things:
of Blues, and Ducks, and Maple Leafs--
Of Capitals--and Kings--
And whether Shark can sweep the whales
And why some tires have wings.'"

3. Create an aura of invincibility around the team's key cogs

I try to avoid breaking the boundary's of the blog's margins, but if it's ever appropriate to do so, it's for a picture taken from the spoon-bending madness that was The Matrix. When Craig Anderson was traded to Ottawa, I was hoping that Sens' announcer Stuntman Stu would introduce him (using an "Agent Smith" voice) as "Mr. Anderson." Sadly, it never happened, but this poster keeps that dream alive.

I imagine that the scene preceding this shot involved the Sens netminder getting blasted by a barrage of pucks and then crumpling in a heap. Brian Gionta stands over him and says, "Goodbye, Mr. Anderson"). Then there's some light necrotica  as someone (e.g. Spartacat) kisses Anderson and says something about a prophecy and "blah, blah, blah, I love you." Then, Anderson gets up, not only stops but suspends a bombardment of pucks in midair, and says, "My name . . . is Andy!" (or at least that's what J-G Pageau called him following Sunday's game).

Side note: Thank God that the spellchecker doesn't recognize the word combining "necro" and "erotica."

4. Present the opponent as the defiler of all that your team holds sacred 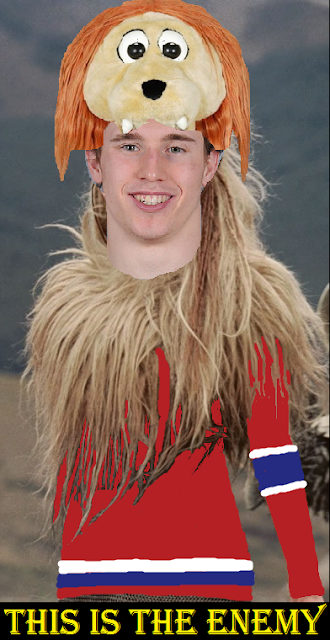 As advertised, here's Spartacat/Aslan after he gave up his life for a traitor (um, Yashin? Hossa?) and has been turned into a war-mantle by the White Witch (i.e. Brendan Gallagher). This propaganda-themed poster both reminds Sens that Gallagher has a veeeeeeery punch-worthy face, and it also gives the match-up purpose. It's not just a series of hockey games: it's a series of battles in a war of mythological proportions that will determine the fate of Narnia! Now get out there and gore the enemy with your sticks until gobs of Turkish Delight bespatter the rink! For Spartac-aslan and Kanat-arnia!

(So, for those keeping track, we now have two Christ-like Senators in this series of posters, and I haven't even brought up Siri's claim that Alfie is God!)

5. Rally the fans during struggles and defeat

Okay, now that I've brought your hopes up, I'm going to bring them down a bit. Let's face it: it's not likely that the Sens will win the Stanley Cup this year. And even if they do, there will be many games ahead in which fans will doubt their team. This poster combats such pessimism: 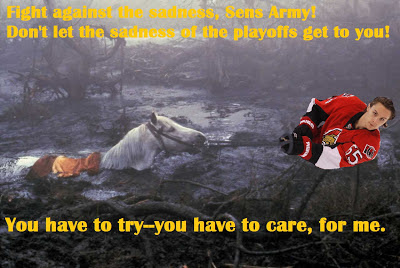 Caption: "Fight against the sadness, Sens Army! Don't let the sadness of the playoffs get to you! You have to try--you have to care, for me."

Are you really going to make Erik Karlsson haul your mopey hide through the swamp of a slump in the team's playoff performance, or force him to drag your downtrodden faces through the boggy Ottawa summer and into the next season after the Sens get eliminated in 2013? Are you going to let sadness mire you in the morass of moroseness, or allow yourself to sink into the slough of despondence? Do you want to see Erik Karlsson cry, call you a stupid horse, tell you that he loves you, and then cry AGAIN?

If that's what you want, then go ahead and give up on the Sens; just remember that forsaking your team and making Karlsson cry will only gladden the hearts of Leafs fans after the blue and white have been similarly eliminated this postseason!